Amongst the line-up the CBC has released for the country’s sesquicentennial celebrations, Anne, its first Anne of Green Gables adaptation in over 30 years, is the biggest standout so far this year. Produced in collaboration with Netflix (where it is broadcast online internationally as Anne With an E), Anne is a TV series made for the modern viewer, a fact that becomes apparent as Anne begins to tell Matthew about herself. By the end of the 90-minute premier, the show has made its first major departure from the book: Marilla punishes Anne by coldly sending her back to the orphanage for her perceived misbehaviour, before discovering that she was in the wrong and sending Matthew on a wild horse ride to fetch Anne back home.

Adapted by Canadian-born Moira Walley-Beckett, best known for her work on Breaking Bad, this Anne is most often described by critics and fans as “gritty” — for better or for worse. Anne reads more deeply into some passages that are dealt with only briefly in L.M. Montgomery’s original text and makes some new inventions to flesh out its characters’ back stories. This Anne is far more affected by her harsh, loveless upbringing, and the Cuthberts now have a subplot to explain why they live together, unmarried and in isolation.

For some, these additions are too much, violating the beloved Anne of their memories. However, the Anne we most often remember is not the Anne of Montgomery’s book, but the Megan-Follows-as-Anne of the CBC’s 1985 TV movie. This was one of the most-watched broadcasts ever to air on Canadian TV and remains, for many, the essential Anne of Green Gables — a Google search of the title brings up the TV movie as the first result, ahead of the book. The 1985 film, beautiful and sentimental, is probably closer to what Montgomery — whose fiction was escapist in nature — imagined when she created Anne. However, in a post-Sopranos TV landscape, viewers aren’t looking for a safe, comforting world to escape into. Audiences demand antiheroes, danger, and plotlines that often veer into the sordid. How could a story as sweet as Anne’s fit into such an environment? With Walley-Beckett’s delicate touch, quite well.

In previous iterations of Anne of Green Gables, Anne’s melancholy early childhood, marked by loneliness, overwork, and imaginary friends, was treated much the same way as her more trivial schoolgirl concerns. In Anne, the titular character is actively fleeing these traumatic memories, giving fans occasion to consider the scars that such a harrowing childhood would leave. While in the novel Marilla mentions her youthful relationship with John Blythe with only a few wistful words, in Anne the regrets of her past are painful memories that shed light on her character — one that offers a much more compelling arc than the one in the novel.

Lucy Maud Montgomery’s life is an important piece of context in understanding the Anne saga, which was published in six books between 1908 (Anne of Green Gables) and 1939 (Anne of Ingleside). Her mother passed away before her second birthday, and she was sent to live with her maternal grandparents in Cavendish, P.E.I., where she spent a lonely childhood. At age 37 she married Presbyterian minister Ewen Macdonald, a man of whom she wrote, “I would not want him for a lover but I hope at first that I might find a friend in him.” Life with him was hard, as she struggled with his crippling depressive episodes as well as her own, on top of a stillborn child, an unscrupulous literary agent, the Spanish Flu, and the shadow of the First World War, which became an obsession for her.

Her most prolific periods of writing came at times when she most needed escape. Shortly after Anne of Green Gables was published, she wrote in her journal, “One of the reviews says ‘the book radiates happiness and optimism’. When I think of the condition of worry and gloom and care under which it was written I wonder at this. Thank God I can keep the shadows of my life out of my work. […] I would not wish to darken any other life. I want instead to be a messenger of optimism and sunshine.” 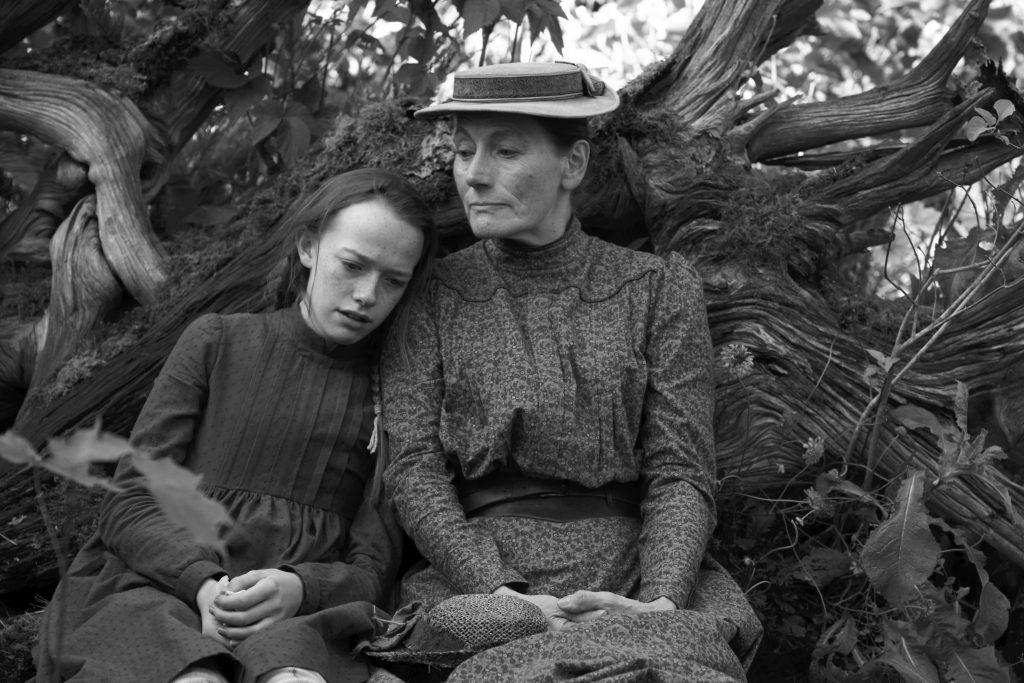 Much like her famous heroine, Montgomery channeled her love of literature and nature into her writing to escape a world that was too gritty, too full of the uncompromising and raw details that make good TV in 2017. Anne may not be as true to the book as previous adaptations, but it is more true to the life that inspired the book.

For modern audiences, this heartbreaking context serves to heighten our appreciation of the sweeter moments. In the second episode, when Matthew tracks Anne down to a train station where she is reciting poetry for coins, we witness a fierce confrontation that ends with the newly-dubbed daughter in a fervent embrace with her guardian, even more touching and poignant than Anne’s joy in the novel at being allowed to attend the picnic.

Ultimately, we love Anne for her resilience and her fresh-eyed wonder. She leans in to her sorrows and finds comfort within herself and in small joys despite the bleakest circumstance. “My life is a perfect graveyard of buried hopes,” she says, explaining, “It sounds so nice and romantic, just as if I were a heroine in a book, you know. I am so fond of romantic things, and a graveyard full of buried hopes is about as romantic a thing as one can imagine isn’t it? I’m rather glad I have one.”