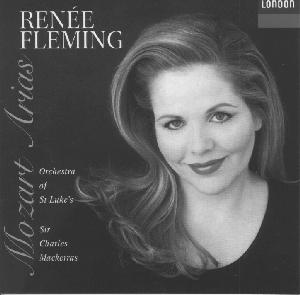 Following recent appearances at
the Met as Desdemona (1995), Fiordiligi, and Marguerite (both 1996),
American soprano Renée Fleming has suddenly become the darling of
Met audiences. Her final performance of Rusalka on May 10, 1997 was
quite simply the most gorgeous singing I have ever heard. Fleming is
a fine, naturally stately actress, as ravishing to the eye as to the
ear. But it is her voice – and what a voice! – that by its sheer
purity and cathartic power pushes one to emotional extremes. Though
the musical world is reacting as if Renée Fleming just fell from the
sky, she is no newcomer to major American opera houses.The
thirty-seven year old singer has been performing since the mid-1980s
but the consensus seems to be that her voice underwent a remarkable
natural improvement in the early 1990s (Gramophone magazine’s Hugh
Canning places the change sometime between 1989 and 1992; New York
Magazine critic Peter G. Davis confirms a transformation by 1993).
By that time Fleming was a happily married mother; and she had her
second child just five weeks before her first Desdemona at the Met
in 1995. Fleming admits that her new-found security helped her to
relax and let her voice find its place. Motherhood may also have
enriched what was already a superb instrument. In any case,
Fleming’s talent is not a product of media hype. She has paid her
dues and has arrived at a level of vocal perfection that is no mere
accident or gift.