You are at:Home»Classical Music»Yannick does double duty with the Orchestre Métropolitain
Advertisement / Publicité

Live concerts are few and far between these days but I finally got to hear one for the first time in over a year. And it was a dandy: Yannick Nezet-Sequin making his concerto debut as a pianist with his Orchestre Metropolitain and continuing his excellent Brahms symphony cycle. Only 250 people got to hear the concert, but I count myself fortunate to be among that number. You will be able to see and hear it at home when it starts streaming on April 30.

Montreal is under severe constraints owing to COVID-19. On Sunday, the first night of a newly imposed 8:00 o’clock curfew, there were serious disturbances in the city, with fires started, store windows broken and numerous arrests. But the OM was allowed to go ahead with its live concert at Maison symphonique. The hall has seating for about 2,000 people but only 250 were allowed to attend. All audience members were required to wear masks and were carefully seated several seats away from their neighbours. Some members of the orchestra also wore masks and were seated at some distance from each other. Yannick wore a mask and only removed it when he was seated at the piano or standing on the podium.

And there was a further complication. After most patrons had bought their tickets, the Quebec government decided that it wasn’t good enough for audience members to be 1.5 metres apart; the new standard was now two metres. This meant that OM staff had to get out their tape measures and recalculate where people could sit. Many people arrived at the concert only to be told that their seat numbers would have to be changed to accommodate the new regulations. 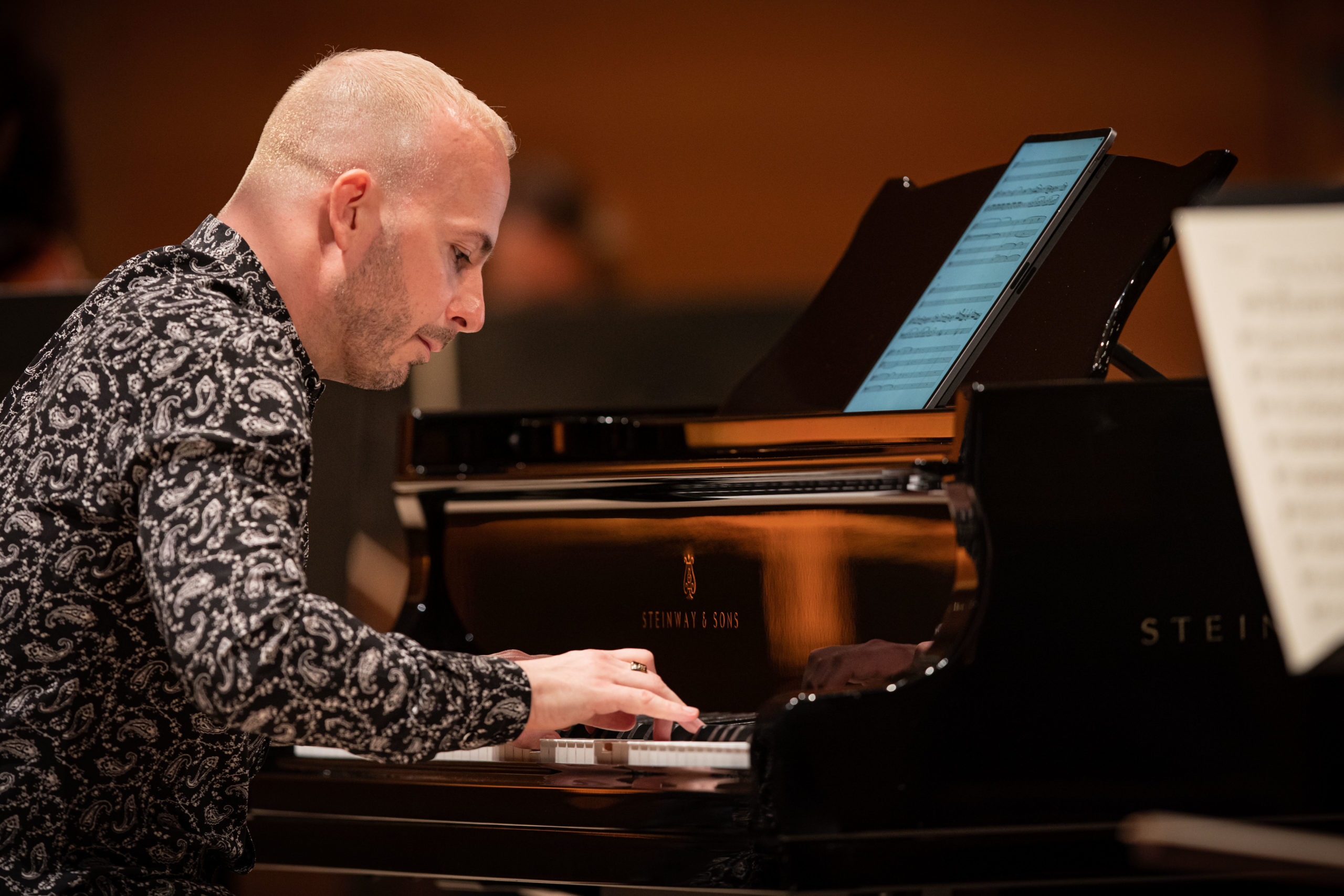 So how did Yannick fare as a late-debuting and unexpected piano soloist? It is well known that Yannick is an excellent pianist. Recently he accompanied star soprano Joyce DiDonato in a series of performances of Schubert’s Winterreise. Just don’t expect him to appear in the near future playing Rachmaninoff 3 or Prokofiev 2. But for Mozart’s K. 414 he was a nearly ideal soloist. This is a concerto that makes no virtuoso demands but requires grace, subtlety and playfulness, and a chamber music-like camaraderie with the members of the small orchestra. And Yannick at the keyboard is just right for this kind of music. Tempos were on the slow side but suited the character of the music. Yannick’s tempo for the Andante might have been slow for some Mozartians, but the music could and did take it very well. At Yannick’s near-Adagio, the score revealed depths of feeling not hinted at in many performances. Throughout the performance members of the OM matched their leader’s elegance and delicacy at every turn.

In classical concertos, and often in Mozart, there are opportunities for the soloist to display his or her technical skills, especially in the first movement cadenza. But as I have said already, not so much in this concerto. Admittedly, Yannick gave us one of the briefest cadenzas one is ever likely to hear, but it fitted his conception of the piece. On the whole, this was wonderful Mozart, and a welcome opportunity to hear the ever-surprising Yannick as a solo pianist.

Yannick and the OM are currently working their way through a Brahms symphony cycle. This afternoon it was the Third Symphony. Under pandemic conditions, most orchestras are practicing social distancing onstage, and this often means that they are unable to find enough room for all their players. For this reason, programming generally leans to works requiring fewer players – Mahler and Richard Strauss are usually out of the question – or to versions of pieces that can still sound well with smaller ensembles.

The Brahms symphonies are interesting cases in this context. While the Third was first performed in 1883 by the Vienna Philharmonic, presumably at full strength, Brahms himself frequently expressed admiration for performances of his works by the Meiningen Orchestra, using only 45-50 players. In non-pandemic times Yannick has frequently conducted the Brahms symphonies in Rotterdam, Philadelphia and elsewhere with robust string sections and an orchestra totaling about 75-80 players. But if I am not mistaken, he has also conducted Brahms with the smaller Chamber Orchestra of Europe. This suggests that Yannick is very much aware that Brahms himself was known to enjoy performances of his music by orchestras of various sizes.

With social distancing it is simply not possible to get 75-80 players onto the stage of the Maison symphonique. Making a virtue of necessity, perhaps, Yannick opted for the Meiningen Orchestra size for his Brahms Third. This means reducing the number of players in each of the string sections. Perhaps another historical reference might be in order here: for the premiere of Brahms’s First Symphony in Karlsruhe there were 49 players, and the strings included 9 first violins, 9 second violins, 4 violas, 4 cellos and 4 basses. Doubtlessly, Yannick has given a lot of thought to such matters, and prior to the streaming of the Symphony No. 1 in the current cycle he offered his opinion that the Brahms symphonies need to be somewhat bass-heavy. In all the performances so far in the current cycle there have been at least six double basses.

So what we heard this Sunday afternoon in April was a performance of the Third with a rather light complement of strings, except for the double basses. It was finely detailed, often breathtakingly beautiful and, at climactic moments, as exciting as one could wish. With a smaller string section, the brass can be overpowering. But there was only one moment, toward the end of the first movement, where I felt the brass – trumpets in particular – sounded a little raw. Elsewhere Yannick and the OM sounded as they nearly always do together, tightly rehearsed and intensely focused.

For me the second and third movements were compelling from beginning to end. Yannick found exactly the right tempos, dynamics were precisely observed and every colour in the orchestration was ideally realized. And those extra basses added just the right amount of very musical weight.

Both conductor and players got a little carried away in the final movement but that is often a good thing. And so it was here. The symphony contains many moments of Brahms at his most autumnal, but he was a man of passion, too; and there is plenty of it in the last movement before the composer draws the music to a close with wistfulness and serenity.

For the record, the concert opened with a rather inconsequential four-minute piece by Giancarlo Castro D’Adonna. This 40-year-old Venezuelan trained in the El Sistema program in his native country and for a time was principal trumpet in the Simon Bolivar Youth Orchestra. We heard a piece titled Diversity in a version for brass. It was a stereotypical Latin piece that would have been more suitable for a dance band. But it was entertaining music and well rendered by the OM players.

In short, a great concert and one that was especially welcome in these trying times. The pandemic and the Province of Quebec permitting, the Brahms cycle concludes on April 17 with the Fourth Symphony. The program will also include Dvorak’s Serenade for Winds in D minor Op. 44.