You are at:Home»La Scena Online»Concert Reviews»Van Zweden and DSO Raise their Game with Schönberg and Brahms 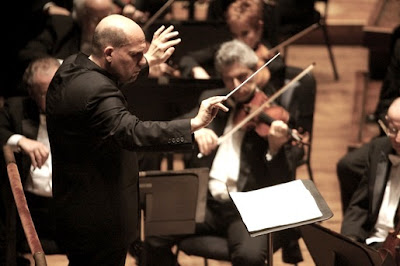 As he nears the end of his second season as music director of the Dallas Symphony, Jaap van Zweden has clearly raised the quality of playing in the orchestra. There have not been many personnel changes, but there has been a palpable exploitation of the enormous pool of talent already in the orchestra. A case in point: the trombone section has always been ‘good’ but now it is ‘remarkably good.’ The sureness of intonation, the beauty of tone, the balance between the three instruments and tuba – all these things are on a level of refinement only hinted at in the past. One has to think that it is van Zweden who has inspired these players to do better.
The biggest improvement is surely in the string section. As a string player of great distinction himself, van Zweden is able to work on details of playing that other conductors cannot even imagine. In the program book for this week’s concert, Laurie Shulman interviewed van Zweden on this very subject and got a revealing, if somewhat technical, answer:

As a conductor, you should ask the orchestra: how do you connect an up-bow to a down-bow? Are you doing it differently in Brahms than in Beethoven? I would say yes. Completely. There is a different connection between one note to the next in Brahms than in Beethoven; you use a different technique. Phrasing with the right arm is a little bit different than with the left arm. For Brahms, you have to deliver differently with your right arm than with any other composer, because of the musical sentence structure. When you have a phrase, it’s usually long, and more connected. We need to know exactly where to use different styles of bowing.