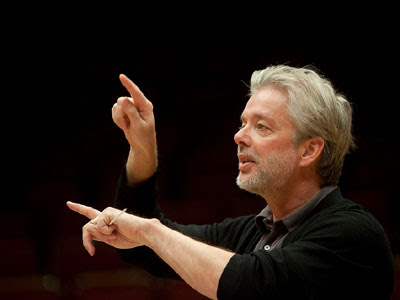 Classical Travels
Roy Thomson Hall, Toronto
October, 2010
Stravinsky: Fireworks
Sibelius: Violin Concerto
Shostakovich: Symphony No. 4
Henning Kraggerud, violin
Toronto Symphony Orchestra/Jukka-Pekka Saraste
The Toronto Symphony (TSO) has the good fortune to enjoy good relations with several of its former music directors. While current music director Peter Oundjian is now well-established, conductor laureate Andrew Davis is a frequent and welcome guest conductor, and less often, maestro Jukka-Pekka Saraste. Saraste, who was music director of the TSO from 1994 to 2001, recently succeeded Semyon Bychkov as conductor of the WDR Radio Orchestra in Cologne.
Solid Sibelius Follows Less than Stellar Stravinsky
On this occasion, Saraste’s partnership with the TSO got off to a shaky start with a messy performance of the early Fireworks by Igor Stravinsky, but soon righted itself with a solid performance of the Sibelius Violin Concerto, with Norwegian violinist Henning Kraggerud as soloist. Saraste has often demonstrated his affinity with the music of his compatriot Sibelius and he did so again on this occasion.
Kraggerud played the concerto with impeccable intonation and beauty of tone, and I was reminded again how much Roy Thomson is improved from its original acoustical incarnation. Kraggerud’s violin projected with ease into the hall as compared with Anne-Sophie Mutter’s struggle to be heard last week in a concert I attended at Montreal’s lamentable Place des Arts. Although Kraggerud’s return visit to Toronto was impressive – he made his first appearance in 2007 – his playing did not convey much individuality.
I must confess, however, that what drew me to Roy Thomson Hall was not the opportunity to hear yet another performance of the Sibelius Violin Concerto, but the much rarer opportunity to hear Shostakovich’s remarkable Fourth Symphony.
Shostakovich Work Officially Condemned
During the 1920s and early 30s, Soviet artists were encouraged to experiment and produced work of startling originality. Then the roof fell in. The Soviet leadership became paranoid about losing power and feared any kind of individual freedom.
Dmitri Shostakovich was a fast-rising young composer during this period, but suddenly his brand of personal expression was out of favour. His opera Lady Macbeth of Mtsensk was officially condemned in 1936, and the Fourth Symphony had to be withdrawn before its premiere, amidst fears that its “formalism” would offend the authorities.
Shostakovich sought to make amends by quickly producing his Fifth Symphony the following year. While the Fifth remains the composer’s most popular work, the Fourth Symphony is a far more challenging and original piece.
During his TSO regime, Saraste, with his tousled hair and scruffy beard, had the look of a Bohemian. Today he has a decidedly aristocratic appearance, a new look of maturity and elegance. Appearances aside, he remains a serious and dedicated musician.
Unsettling, Exhausting, Exhilharating!
The Shostakovich Fourth is not only problematic in its origins but in its difficulty too. It makes extreme demands on the orchestra and on listeners. The TSO had obviously been very well prepared by Saraste and gave him maximum effort – with the exception of some disinterested back desk violinists – from start to finish. The solos for English horn, piccolo and trombone were all excellent.
The Shostakovich Symphony No. 4 starts with music that is far from being either fresh or original; workmanlike would be a more apt description. But just when one is about to give up on the piece – it is relentlessly noisy too – a wild fugue begins in the strings. Shostakovich suddenly vaults us from the mundane and artificial to the real and frightening. From there on the symphony constantly surprises us with its musical and expressive shifts, right through to the magical and ambiguous ending – strings holding a soft C major chord against the celesta playing a tune in C minor – which foreshadows the end of the slow movement of the Fifth Symphony.
The Fourth Symphony is a magnificent, seminal work in Shostakovich’s development and Saraste was totally inside it. No wonder the TSO musicians applauded him enthusiastically at the end. The audience too seemed to realize that they had heard something wonderful, even though it took some effort to stay with the composer’s long and unsettling journey.
Paul E. Robinson is the author of Herbert von Karajan: the Maestro as Superstar, and Sir Georg Solti: His Life and Music, both available at Amazon.com. NEW for friends! The Art of the Conductor podcast.