Maestro Peter Bay, who hails from Washington, D.C., has made his home in Austin, Texas for the past 20 years. It has been a Golden Age for Austin and for the Austin Symphony (ASO). As the city has grown by leaps and bounds to become an economic powerhouse and a major entertainment destination – think South by Southwest (SXSW) – Peter Bay has developed the orchestra into one of the prime cultural assets of Central Texas. Under his direction, the orchestra has vastly expanded its repertoire, is able to attract the finest soloists, and night in and night out, gives inspired performances of the highest quality. The opening concerts of the 2017-2018 season provided ample evidence of all of those achievements.

The program was entitled “Mozart and Paris”, a somewhat misleading title since Mozart had a connection with only one piece on the program. No matter. The combination of works by Mozart and Poulenc proved to be eminently satisfying. To add some spice and novelty to the menu, the two Poulenc works had never before been played by the ASO. The evening’s soloist was Anton Nel, an artist who has appeared often with the ASO and who has become an audience favourite. One of the foremost pianists of his generation, Nel was born in South Africa. Like Peter Bay, he has chosen to make his home in Austin, where he is a Professor of Piano in the Butler School of Music at the University of Texas.

I have heard Nel in a wide range of repertoire over the years and know that he does complexity and virtuosity with the best of them. On this occasion he also showed his mastery of elegance and beauty of sound, demonstrating his remarkable versatility in concertos by Mozart and Poulenc, showing himself not only to be at home with their very different styles, but also on two different instruments, piano and harpsichord. His Mozart was also perfectly controlled in matters of volume and tempo. And those trills! Prof. Nel gave us a master class in how technical control can be the path to sublimity.

Francis Poulenc’s Concert champêtre (Pastoral Concerto) is a daring and improbable piece. What composer would think of setting a poor little harpsichord with its puny sound against a large orchestra with lots of percussion? It is the sort of thing one would do to one’s worst enemy, were he/she a harpsichordist. But in this case there was method in the madness. 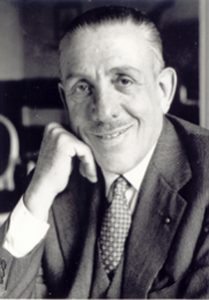 Poulenc (1899-1963) wrote this piece in 1927-28 for Wanda Landowska, and Landowska was nobody’s fool – or worst enemy. She loved to play the traditional harpsichord repertoire but she also wanted to play more recent music, and above all she wanted to be heard! Playing a harpsichord in a big, modern concert hall is an exercise in futility and she knew it. So she created a new and much more powerful instrument that could hold its own with a symphony orchestra. Anton Nel didn’t have a beast of a harpsichord like Landowska’s, so he did the next best thing; he amplified what he had electronically and for the most part, the fix worked just fine. Nel played the harpsichord just as well as he had played the piano earlier in the concert – which is to say, magnificently – and gave this unusual piece a fine outing. Poulenc had a sense of humour and there is plenty of evidence of it in this piece, but his dark side was there too, especially in the enigmatic closing bars of the concerto, in which the harpsichord gets the last word.

Peter Bay and the ASO opened the concert with excerpts from Poulenc’s ballet score Les Biches (The Does), music typical of this insouciant composer, who didn’t care about the latest musical fashion, and who didn’t mind dipping into the popular music styles of his day to make his ‘serious’ music entertaining. Les Biches is certainly entertaining, although one does begin to wonder whether “popular” is just a euphemism for “trivial.”

There is nothing trivial about Mozart’s “Paris” symphony, written for a visit to Paris in 1778, for the large orchestra of the Concerts spirituels. Under Peter Bay’s authoritative direction, the ASO proved that it can play Mozart as well as Mahler and Respighi. In fact, it should play more Mozart. It would be good for the players and good for Austin audiences, who do not get to hear nearly enough symphonic Mozart.

Incidentally, the program notes by Joseph and Elizabeth Kahn stated that the ASO had chosen to play the second version of the slow movement of Mozart’s “Paris” symphony. Not so. It played the first and much more interesting version, the one that is usually played these days.

Paul E. Robinson is the author of Herbert von Karajan: The Maestro as Superstar, and Sir Georg Solti: His Life and Music, Reviews Editor for ludwig-van.com/toronto, and Digital Editor for classicalvoiceamerica.org.  For friends: visit Paul’s podcast, Classical Airs.