It is one of the ongoing mysteries of classical music that the tiny country of Finland – population 5.5 million – manages to turn out more conductors with international careers than any other country in the world. While Esa-Pekka Salonen may be the best-known, the list of outstanding maestros past and present includes Paavo Berlund, Jukka-Pekka Saraste, Sakari Oramo, Hannu Lintu, Susanna Mälkki, Santtu-Matias Rouvali, John Storgårds , and others. This week Storgårds, one of the best, principal guest conductor of the National Arts Centre Orchestra, as well as the chief guest conductor of the BBC Philharmonic Orchestra, made his debut with the Dallas Symphony (DSO) in a program featuring the long-overdue local premiere of Nielsen’s Symphony No. 5.

On stage, Ted Soluri, Dallas Symphony principal bassoonist, made some brief pre-concert remarks about the music the audience was about to hear. Mr. Soluri was affable enough but what he had to say was superficial at best, unnecessary and in one instance misleading. Whatever else it is, Haydn’s “Surprise” symphony is not an “aperitif”; on the contrary, it is one of the masterpieces of the Classical Period repertoire for orchestra. Haydn symphonies are not played nearly often enough these days – the period instrument groups seem to have claimed them for themselves – and this late-period Haydn symphony had not been played by the Dallas Symphony in the past 16 years. Full credit to Maestro Storgårds for including it in his program.

Storgårds obviously loves Haydn and gave the piece a fine performance. He reduced the size of the orchestra – only two double basses were allowed to participate – but otherwise made little effort to produce an historically informed performance. There was plenty of vibrato and open strings in the violins were few and far between. But in a nod to authenticity timpanist Brian Jones had brought along a pair of some more or less period drums for the occasion. As for the reduced string section, I couldn’t help but wonder whether that was wise or even historically accurate. By all accounts, Haydn had a very large orchestra at his disposal when this symphony was first played in London (1792). My doubts grew stronger when trumpets and timpani all but drowned out the violins in the first tutti. That said, it was a joy to hear a great Haydn symphony in the Meyerson. More, please! 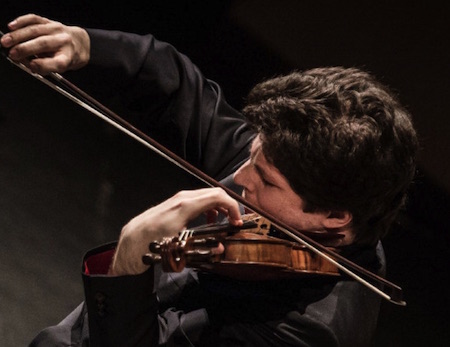 Soloist Augustin Hadelich (photo: right)  was born in Italy of German parents and got his big break when he won the 2006 Indianapolis International Violin Competition. Mr. Hadelich plays a 1723 Stradivarius violin and perhaps not surprisingly, produces a wonderful tone. His technique is excellent and he brings great maturity to his music-making, although to my taste, he was somewhat reserved in his approach to the Sibelius Violin Concerto. Maestro John Storgårds, both a Finn and a violinist himself, gave Hadelich an authoritative accompaniment. On the whole, this was an excellent performance.The orchestra was beautifully-balanced and played with great expressivity, especially in the slow movement. The audience gave Hadelich a tremendous ovation and he returned the favour with some lovely unaccompanied Bach from Partita No. 2. 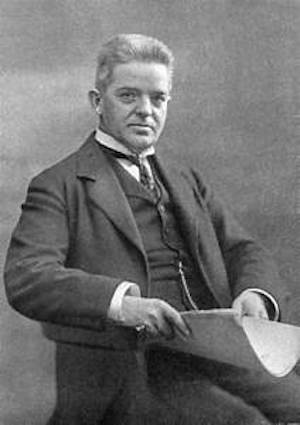 The highlight of the concert was surely the Dallas premiere of the Symphony No. 5 by Danish composer Carl Nielsen (1865-1931). Composed in 1920-22, nearly 100 years ago, it is one of the composer’s greatest works, and is played regularly all around the world. What took Dallas so long? True, the piece is difficult to play, especially for the strings, and only the finest orchestras can even attempt it. But while it is thrilling to hear it played it is even more exciting to see it live in the hall. A case in point: there are not many other pieces in which the composer instructs the snare drummer to improvise fortissimo and at a faster tempo than the rest of the players, “as if at all costs he wants to stop the progress of the orchestra.” In fact, this unusual direction was omitted from the 1950 edition of the score but the concept remains pretty much the same.

Another unusual feature of the orchestration is the inclusion of a part for celesta, although the instrument was used by a few composers before Nielsen; for example, by Tchaikovsky in “Dance of the Sugar Plum Fairies” from The Nutcracker (1892). Nielsen uses the celesta in only the first movement of Symphony No. 5, and only to play one tone: the note “D” repeated over and over. Unfortunately, in most performances, the Dallas première included, there is so much else going on in this passage that the celesta is virtually inaudible. Might there be some sort of musical joke going on here? Could it be that Nielsen was providing a part in his symphony for a very modestly-talented young keyboard player? For the record, the repeated “D”s are, in fact, a thematic concept that the composer puts to greater use, although not with the celesta, later in the piece.

There is one other aspect of Nielsen’s orchestration in the Fifth Symphony that should be mentioned. The lowest note on the standard flute is “C”, but Nielsen asks his flutes to play a “B”, a half-step lower. Impossible? Actually no, since the substitution of a longer foot joint in the instrument makes this lower note possible. Nonetheless, it is an unusual idea and as used 3 bars before rehearsal number 92, with the softest possible dynamics, it produces an effect of remarkable warmth.

Taken as a whole, this symphony contrasts moments of conflict, sadness, joy and triumph with a “sound” that is unique, and which we might call typical of Nielsen. 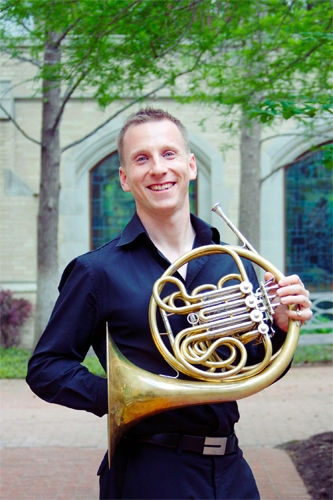 Storgårds conducted with great assurance and in what must have been the usual limited rehearsal time, put together a performance that was outstanding. When former music director Jaap van Zweden moved on to the New York Philharmonic, I was afraid that some of the fine players he added to the orchestra might take the opportunity to move on too. Not so. The addition of concertmaster Alexander Kerr, co-concertmaster Nathan Olson and associate concertmaster Emmanuelle Boisvert absolutely transformed the quality of the first violin section under van Zweden. I was delighted to see that all three players are still there. Another van Zweden addition was principal horn David Cooper (photo: right), one of the world’s great horn players. Cooper won the audition to become one of the two solo horns of the Berlin Philharmonic, but after a short stay in Berlin, he is back in Dallas. It is worth the price of admission to hear Cooper play almost anything, and for the Nielsen he was in top form. Moreover, with Cooper leading the horns, the entire section sounds better than ever. David Cooper is one of the Dallas Symphony’s star players and they need to do everything they can to keep him.

While the entire orchestra played well for Storgårds, special mention must also be given to clarinetist Gregory Raden, who played his long and difficult solos with eloquence and virtuosity.

Possibly as a result of the limited rehearsal time, one aspect of the Nielsen performance was disappointing. As noted earlier, at one point in the first movement, the snare drummer is asked to improvise, to do everything possible to interfere with what the rest of the orchestra is playing. It seemed to me that the snare drummer was far too timid in his improvisations. My sense is that Nielsen expected something more forceful. For comparison, interested listeners/viewers might wish to take a look at the performance by Herbert Blomstedt and the Danish Radio Symphony Orchestra (www.youtube.com/watch?v=oOuQ7sb9gGo), in which the snare drummer plays like a madman, making this moment in the symphony absolutely terrifying.

This Dallas Symphony concert was part of the annual Soluna International Music and Arts Festival, to which the DSO contributes several concerts every year. The Festival, which focuses on new and innovative work and the engagement of as much talent as possible from the Dallas arts community, also includes other concerts, art installations, dance events and a seminar called Music and the Brain.