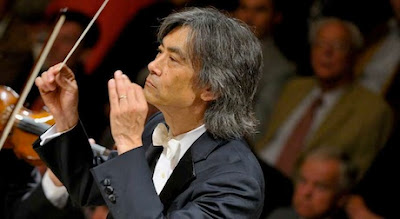 Montréal’s new hall, La Maison symphonique, has been presenting concerts for over a month now, and after an ‘unfinished’ opening, we’re finally into the fine-tuning phase of the project. An impromptu example occurred mid-concert when maestro Nagano stepped down from the podium after the first movement of the Bruckner to announce that he was unable to continue until his wonky podium was fixed. Someone had failed to ensure that the offending podium, made of the same Quebec beech wood that covers the entire interior of the hall, was sitting flat on the floor of the stage. In addition to threatening the maestro with seasickness, the pitching podium also contributed some unwanted percussion effects; no matter, Nagano handled the situation with enormous grace and humour and a stagehand quickly stablilized the stand.

Nagano is apparently a big fan of composer Pierre Boulez and has programmed no fewer than five of his pieces this season. For my part, I have never warmed to Boulez’ music and continue to find it as bloodless as Boulez’ conducting. The seven minute

Mémoriale for flute solo and small ensemble dating from 1985 is mostly quiet and uneventful music that fails to convey much of anything.
Beethoven Style and Substance Steal the Show

Beethoven’s Piano Concerto No. 2 is an early work quite without the fire and novelty of the composer’s mature pieces, but in the hands of Austrian pianist Till Fellner, it was consistently interesting. Fellner didn’t attempt to make the work bigger than it is; he simply brought out its charm and playfulness, adding to the fun by introducing some hesitations in repetitions of the main theme in the last movement. Perhaps the best feature of this performance was the high level of collaboration between pianist, conductor and orchestra. Nagano’s reduced orchestra produced a rich, full sound and accents were strong and incisive. The dialogue between soloist and orchestra at the end of the slow movement was a genuine conversation with soloist and musicians truly listening to each other. The gradations of softness were beautifully realized. It should be noted that Fellner was playing a Hamburg Steinway which he himself had selected for the new hall. La Maison symphonique will also have a New York Steinway selected by Emanuel Ax. The purchase of these two instruments was made possible by Montreal philanthropist David B. Sela.

Underpowered Bruckner Disappoints
The OSM was greatly enlarged for the Bruckner Fourth Symphony, but the instrumental configuration on stage remained the same. First and second violins sat facing each other with cellos and basses behind the firsts and violas behind the seconds. From my seat on the right hand side of the Parterre level I finally heard plenty of “buzz” from the basses. The overall string sound was warm and resonant without obscuring detail. Several times in the Bruckner, I felt the brass was underpowered, but this likely had more to do with Nagano’s interpretation of the piece than with the acoustics. On the other hand, the soft trumpet solos seemed far too loud. As this aberration was certainly not attributable to the incomparable Paul Merkelo, I concluded that it was one of the acoustical peculiarities of my seat location in the hall. Special kudos to principal horn John Zirbel for the masterful way he handled his countless solos.

This Bruckner Fourth was very well played with many moments of expressive detail; however, overall, it seemed to me that Nagano had sacrificed power and intensity in favour of blend and balance. We really don’t need to hear every note of those endless string scales and tremolos when the brass is giving us the heart and soul of the piece. To put it bluntly, this is often filler and should be treated as such. While Nagano gave us beauty and carefully prepared detail, he rarely got to the inner spirituality of the work.

Bruckner 1888 Version of the Fourth Symphony

There has been a good deal of discussion over the years about the various revisions of Bruckner’s works by the composer himself, and by others. The Fourth Symphony is one of the most difficult cases in point. Apart from the composer’s own search for perfection, the reasons for revision appear to have been twofold. The orchestration often needed revision to be more effective, and in the earlier editions the music suffered from repetition, stopping and starting when it should be moving forward. Nagano chose for this performance of the Fourth Symphony the edition identified in the programme as “version 1878-1880,” presumably referring to the version edited by Leopold Nowak. Although the Novak appears to be the choice of most contemporary conductors, a convincing case has been made recently for the previously discredited 1888 Bruckner version – the composer’s last thoughts on his own work – which audiences, as a result, may soon be hearing performed more frequently in concert halls around the world.

Both leading Montreal maestros are dedicated Brucknerites. Yannick Nézet-Séguin has been working his way through a cycle of Bruckner symphonies with the Orchestre Métropolitain and the latest release happens to be the Symphony No. 4 (ATMA Classique ACD2 2667). For the record, he uses the 1936 Haas edition. Kent Nagano has just recorded the Seventh Symphony with his Bavarian State Orchestra (Sony 88697909452).

Paul E. Robinson is the author of Herbert von Karajan: the Maestro as Superstar, and Sir Georg Solti: His Life and Music. For friends: The Art of the Conductor podcast, “Classical Airs.”