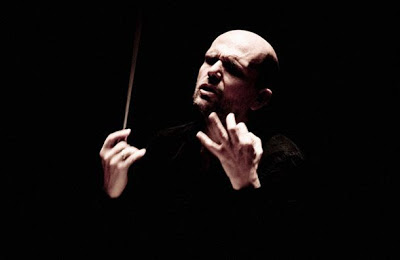 Ian Bostridge, tenor
Dietrich Henschel, baritone
Children’s Chorus of Greater Dallas
Dallas Symphony Chorus
Dallas Symphony Orchestra
Jaap Van Zweden, conductor
Paul Phillips, conductor (chamber orchestra)
Myerson Symphony Centre
Dallas, Texas
November 9, 2012
By the late 1930s Germany, out to build its empire, had taken over Austria and Czechoslovakia. By September 1, 1939, when Germany attacked Poland, it had become clear to the rest of the world that Germany would not be satisfied until it had conquered the whole of Europe and the Soviet Union, just as Japan was on a track to crush China and the whole of Asia. There is not much argument today about the need at the time to fight against Germany and Japan in what became known as World War II (1941-1945). Though the consensus is that the war was necessary, for British composer Benjamin Britten – as is clear from his magnificent “War Requiem” – no war can be “just.”
Great Britain’s Coventry Cathedral, dating back to the Middle Ages, was destroyed by the German Luftwaffe early in WW2  (1940). In 1962, a new cathedral, built right next to the ruins of the old one, opened its doors; for the occasion, Benjamin Britten was invited to write a major choral work, which he called the War Requiem.
Although seventeen years after the end of the war, there were still some who couldn’t forgive Britten for siding with the likes of Neville Chamberlain and his policy of appeasement with regard to Germany’s expansionism, the composer went a long way toward silencing his critics with the War Requiem. In its inspired blending of Catholic liturgical text and the World War I poetry of Wilfred Owen, the War Requiem is a profoundly moving evocation of the horrors of war and the ultimate need for reconciliation between the parties to the conflict. Conductor Jaap Van Zweden has been a fierce advocate of the War Requiem and made a recording* of the work last year in Holland. Last week in Dallas he presented this towering work in three performances. I heard the second one and it was magnificent. Van Zweden had chosen wonderful soloists. Tenor Ian Bostridge (photo: right) has sung the role all over the world and his expressive lyric voice very much recalls that of the man for whom the part was written, the late Peter Pears, Britten’s long-time partner and collaborator. Like Pears, Bostridge has an uncanny sense of how to fit words to music and vice versa. The style of singing is idiosyncratic, as is the music.

The German baritone Dietrich Henschel has had a major career as a lieder singer. His sensitivity to the meaning of the text and his ability to shape a phrase were ideal for the War Requiem. 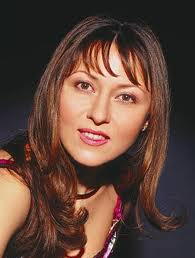 About soprano Olga Guryakova’s (photo: right)  performance, there will probably be little agreement. Russian-sounding voices tend to do that to North American listeners. In my opinion, her vibrato was a little wide but her voice was strong and at its best, rich and commanding. It should be noted that the male soloists were placed next to the conductor at the front of the stage while Guryakova was in the choir loft.

The two choirs were superb in this difficult music and the orchestra played at the level we have come to expect when Jaap Van Zweden is on the podium. He had some capable assistance on this occasion from Paul Phillips, music director of the Meadows Symphony Orchestra at SMU, conducting the chamber orchestra. And last but not least, the Myerson enhanced both the intimacy and the grandeur of the War Requiem. Britten said that he preferred to hear the piece in a resonant, cathedral-like space and I suspect he would have approved of the Myerson.
It is sometimes assumed that since he wrote so much “sacred” music Britten must have been a devout Christian. That was not the case. He grew up in a milieu in which church music was a part of the aural landscape, as it were, and in which churches provided great opportunities for young composers, and he was attracted to certain Bible stories for their insight into the human condition. Although he very much admired the figure of Jesus, he did not believe in his divinity. With respect to the War Requiem, this means that Britten’s inclusion of a Latin liturgical text along with the poetry of Wilfred Owen needs to be understood in a special way. 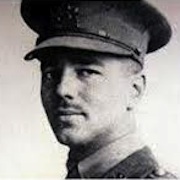 The heart of the War Requiem is Wilfred Owen’s (photo: right) anti-war poetry, which paints a picture of misery and death, and castigates the institutions and leaders who sent millions to their death on the battlefields of Europe. In one of his poems, Owen retells the biblical story of Abraham and Isaac. Abraham is commanded by God to sacrifice his son Isaac. At the last minute, Abraham substitutes a ram and spares his son. That is the Biblical version of the story; Owen sees it differently: “Offer the Ram of Pride instead of him. But the old man would not do so, but slew his Son – and half the seed of Europe, one by one.”

In the poet’s view the old men – politicians and religious leaders – are the ones who make these terrible decisions on the basis of geopolitical calculations and nebulous convictions about the will of God. Where was Owen coming from? He fought in World War I and was killed in battle seven days before the end of the war at the age of 25.
At such moments in the War Requiem, when Owen’s poetry cuts to the heart of the matter, the chorus often joins the male soloists as a kind of Greek chorus commenting on the action, seemingly providing religious comfort in the form of Latin words from the Catholic mass for the dead. But such words are hollow; in promising that all will be well in life after death, they have been used too often to justify injustice and slaughter, and writers like Anthony Milner, quoted by Laurie Shulman in her notes for the Dallas performances of the War Requiem, have it backwards when they describe the War Requiem as “a setting of liturgical texts with poetical commentary.” The spiritual and philosophical core of the work is Owen’s poetry; the liturgical text provides the commentary and it is by no means reassuring in the face of the horrors and deception described by the poet.
This interpretation of the War Requiem has been expressed by Arthur C. Colman (Music and the Psychology of Pacifism: Benjamin Britten War Requiem): “The hope for eternal life that religion offers both ritually and emotionally through rebirth and renewal, the promise of God, that venerable covenant upon which Judeo-Christian civilization is based, is relegated to the darkest abattoirs of human history.”
It has often been noted that Britten’s music for the War Requiem is dominated by one of the most dissonant intervals in tonal music: the tritone. In early music, this interval was banned and given the name diabolus in musica or “the devil in music.”
The use of this interval is surely not just a technical choice on Britten’s part, but rather part of the very meaning of the work. It is another way in which Britten chooses to question orthodoxy and the means by which authority crushes and controls individuals. This is a theme that Britten returned to again and again in works like Peter Grimes, Billy Budd, and Death in Venice, and most obviously in a discussion of the War Requiem, his anti-war opera Owen Wingrave.
There is reconciliation in the War Requiem, but it is between the parties to the conflict; the men who did their best to kill each other are at least reconciled in death. Organized religion does what it always does: assures each of the warring parties that they have God on their side; blesses the doomed young men as they head off to war; promises them eternal life when they come back in coffins.
The War Requiem needs to be played regularly in every country in the world to remind us that war is not ultimately about winners and losers, heroes and victims, but about man’s inhumanity to man.
*Britten: War Requiem. Evelina Dobracheva, sop., Anthony Dean Griffey, ten., Mark Stone, bar., Netherlands Radio Philharmonic Orchestra and Choir/Jaap Van Zweden (available on the Challenge label, or as a download from www.iTunes.apple.com/album/id1138411.


Paul Robinson is the author of Herbert von Karajan: the Maestro as Superstar, and Sir Georg Solti: His Life and Music. For friends: The Art of the Conductor podcast, “Classical Airs.”
.