The Dallas Opera has a long and illustrious history. It was founded in 1957 and its first presentations featured the legendary Maria Callas in a Zeffirelli production of La Traviata, as well as in Medea, and Lucia di Lammermoor. Other big stars followed, including Montserrat Caballé, Placido Domingo, Joan Sutherland and Jon Vickers.
Those were Dallas Opera’s Golden Years; unfortunately, the money just wasn’t there to sustain the company at this level, especially when performances had to be given in the enormous and inhospitable Music Hall at Fair Park.
Today, over 50 years after its inception, with the opening of the Margo and Bill Winspear Opera House, a new day may be dawning for the Dallas Opera. I made my first visit to its new home this past weekend for a production of Donizetti’s Don Pasquale.
The star of any production of Don Pasquale 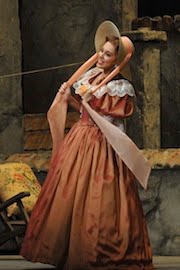