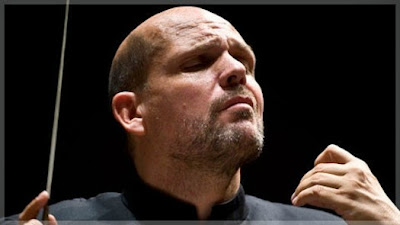 Tao: The world is very different now (world premiere)
Sibelius: Violin Concerto in D minor Op. 47
Milhaud: Murder of a Great Chief of State Op. 405
Beethoven: Symphony No. 3 in E flat major Op. 55, “Eroica”
Joshua Bell, violin
Dallas Symphony Orchestra/Jaap van Zweden
Meyerson Symphony Center
Dallas, Texas
November 23, 2013
Across America and around the world, individuals and organizations paused on November 22 to reflect on the 50thanniversary of the assassination of President John F. Kennedy (JFK). In Dallas, Texas, the occasion had special significance because it was in that city that the murder took place. In remembrance of President Kennedy, The Dallas SymphonyOrchestra (DSO) had commissioned a new work, part of an evening of music supposedly relating to his death in one way or another.
Tao Tribute “Ultimately About Memory”? 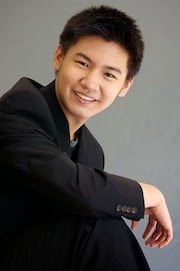 The concert opened with a 17-minute piece by 19-year-old pianist-composer, Conrad Tao (photo: right). The title of the piece comes from JFK’s inaugural address (1961). In that speech the new president compares the world today with the way it was when the country was founded. Kennedy states that today man has both the power to eradicate poverty, and the power to destroy mankind itself. Which is it going to be? Kennedy expresses great optimism that Americans will choose a path toward greater freedom, creativity and peace in the world. A short time later JFK’s optimism and judgment were sorely tested during the Cuban missile crisis; his steady resolve and restraint averted what might have been a nuclear conflict.

Mr. Tao is a remarkably talented young musician, but one wonders what qualified him to write a work in memory of JFK for this important occasion. Surely it would have been more interesting to commission a composer who had lived through that terrible event. Mr. Tao tells us that he visited the Sixth Floor of the Texas Book Depository Building in preparation for his assignment –  a necessary undertaking, but hardly sufficient schooling for this historic commission. Further, with extraordinary presumption, Mr. Tao writes in his program note that The world is very different now “is ultimately about memory” – a puzzling statement from a young man who could himself have no memory of the assassination.
In any case, on first hearing, Mr. Tao’s piece did not seem to “recall” anything in particular and conveyed neither deep emotion nor the power one might employ in evoking the literally earth-shaking significance of the murder of a popular U.S. president in his prime.
Video Collage an Uncomfortable Adjunct
Then there was the video that accompanied the music – incoherent in itself, with little obvious connection to the music – which apparently was not part of the original commission and was conceived long after the music had been written. The executive producer of this video was Peter J.G. van Ingen, who also produced this season’s imaginative and expertly directed short video previews of DSO concerts, featuring Maestro van Zweden talking about the music programmed for each evening. As good as the previews were, the JFK assignment must have been a greater challenge, as in this video Mr. van Ingen offered us little more than a collage of news photos and films from the period, assembled in a way that did little to enhance our understanding of the terrible event, JFK or Mr. Tao’s score. The succession of today’s faces, filmed in color, at the end of the video suggested what? Diversity? We haven’t forgotten? The world is very different now?  A bit of “today” tacked on to the end of a jumbled vintage collage – incongruous, at best! 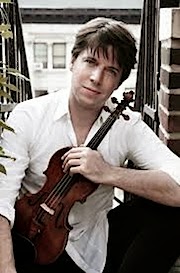 The new Tao piece was followed by a perennial favorite, the Sibelius Violin Concerto, featuring Joshua Bell (photo: right), one of the most popular classical artists before the public today. Bell was in great form and with van Zweden and the DSO as sensitive collaborators, the performance was wonderful. Under van Zweden’s baton, the solo violin could always be heard and phrasing in the orchestra superbly complemented the poetry of Bell’s performance. Rarely have I heard the solo part so perfectly integrated with the orchestral accompaniment!

The orchestral passages in the Sibelius concerto can easily be played with a power that is out of all proportion to what the solo violin can do, but not so in this performance; van Zweden built the climaxes with such great intensity that the result was a satisfying “illusion” of tremendous volume.
The slow movement was exquisitely played by Bell and by the orchestra, especially the horns. At the beginning of the finale, timpanist Brian Jones switched to harder sticks so as to articulate the insistent rhythm as clearly as possible, and it paid off. Again, we had clarity and intensity instead of volume.
After intermission came another JFK-related piece: a four-minute work by Darius Milhaud, written in memory of the fallen president. Unfortunately, like so many pieces by this facile French composer, it was quite forgettable.
DSO in Top Form; Eroica at Top Speed!
Finally, van Zweden conducted the longest piece on the program, Beethoven’s EroicaSymphony. I have never heard a performance of the Eroica played without trumpets – the piece is simply unimaginable without them. Had I not seen the two DSO trumpeters sitting at the back of the orchestra, I might have thought they had forgotten to participate; never once in the performance did van Zweden allow them to play more than mezzo forte. I have no idea why van Zweden took this approach but for me it robbed the climaxes of much of their elemental power and majesty.
As always, van Zweden had the rest of the orchestra playing in top form and many passages came through with unusual clarity of articulation, even at high speed. Speaking of tempo, I really must take issue with van Zweden’s tempo for the first movement; too many moments went for nothing. It’s all very well to achieve perfect balance between the sections of the orchestra but in Beethoven the point of it all is not balance, but heartfelt emotion and abandon. If the metronome marking does not allow the music to breathe naturally, then it might be time to reconsider the metronome marking.
It was good to see the DSO honoring the memory of JFK; that said, the two pieces directly linked to JFK were disappointing. Beethoven’s EroicaSymphony, given its moving funeral march, and its subtitle (“composed to celebrate the memory of a great man”) was a good choice for the occasion, in spite of the misconceived (in my opinion) performance. The Sibelius Violin Concerto, while it had nothing whatever to do with JFK (apart from the fact that, as the liner notes state, it is a serious and weighty piece) and probably shouldn’t have been included in this concert, was so brilliantly performed that one can hardly complain about its inclusion in the program.

In Case You Hadn’t Heard…
The day after this concert, the DSO announced that Jaap van Zweden’s contract had been renewed until 2019 – great news in the light of how much fine music making he has given Dallas audiences! The DSO board and management deserve great credit for locking in this extraordinary conductor early, before he is lured away by other orchestras.
Paul Robinson is the author of Herbert von Karajan: the Maestro as Superstar, and Sir Georg Solti: His Life and Music. For friends: The Art of the Conductor podcast, “Classical Airs.”