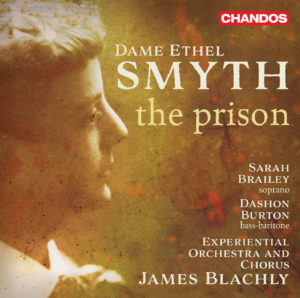 Just recently I finally got around to reading Jan Swafford’s authoritative biography of Brahms. In the book there were several references to Ethel Smyth (1858-1944) and her comments about Brahms. I then turned to Smyth’s autobiographical Impressions That Remained to learn more. As a young woman Smyth had gone to Leipzig in 1878 to study music and became a pupil of Heinrich von Herzogenberg. As it happens, Heinrich and his wife Elisabeth were great friends of Brahms and Brahms often sent his latest works to Elisabeth for comments. Elisabeth and Ethel in turn became close friends and perhaps even had an intimate relationship. While Ethel was not particularly taken with Brahms either as a man or as a composer, she has left us a vivid portrait based on numerous close encounters in the Herzogenberg household. Smyth went on to become the first important female British composer and her early works such as the opera The Wreckers attracted the attention of major conductors such as Bruno Walter and Sir Thomas Beecham. The Prison, composed in 1930, is reminiscent of Elgar’s The Dream of Gerontius; both concern a dying man’s preoccupation with his soul and the possibility of immortality. Smyth’s work is much less ambitious than Elgar’s and has little of its drama and power. But it is a melodious and thoughtful piece. Smyth’s father was a military man and she grew up next to an army base. In the final sections of The Prison she deftly makes use of The Last Post, a military bugle call associated with funerals. The New York-based performers led by James Blachly offer a well-prepared reading of this unfamiliar work, and they are to be thanked for bringing it to our attention. Only recently has Ethel Smyth’s music become better known. She was certainly a pioneering figure among women composers and also threw herself into the fight for women’s right to vote prior to World War I.