On November 11 2018, virtually the entire world paused to commemorate the 100th anniversary of the end of World War I, the so-called “War to end all Wars.” Sadly, as terrible as it was – nine million soldiers and seven million civilians are estimated to have died in the conflict – just 21 years later an even greater conflagration engulfed the world in World War II.

In every war, just as there is carnage and horror there is also courage and heroism, and occasionally, humanity. Such was the case on Christmas Eve 1914, when in numerous sections of the Western Front there were unauthorized truces when soldiers from each side put down their weapons and met peacefully at least for a few hours.

These truces were the inspiration for Christian Carion’s extraordinary film, Joyeux Noël and for the opera based on it, Silent Night by American composer Kevin Puts and librettist Mark Campbell. In 1912, Puts won the Pulitzer Prize for this opera – his first – and Silent Night has already seen more than twenty productions, a remarkable achievement. 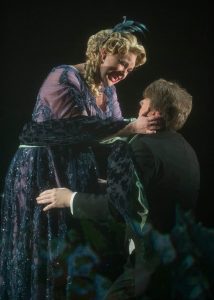 While the film, Joyeux Noël, is based on actual truces that occurred on that memorable night in 1914 near the beginning of the war, the storyline is total fiction. In the film two German opera stars carry the narrative forward; tenor Nikolaus Sprink is drafted into the German army and sent to the front lines and at a climactic point in the story, brings his beloved Anna to the trenches to sing for the soldiers during the truce, a far-fetched plot point, to say the least, and one that greatly weakens the film’s credibility. That said, Carion’s handling of the fraternization between German, Scottish and French soldiers is deeply moving.

In Silent Night, the opera version of this story, composer Puts and librettist Campbell stick very closely to Carion’s film plot, incorporating not only the basic outline but also many of the details.

Having seen both the film and the opera, and before considering the many merits of the latter, one must ask ‘Why an opera?’, in light of the fact that Carion’s film contains a good deal of music by composer Philippe Rombi, which is by no means confined to the contributions made by the two opera singers. Much of this music is used for thematic purposes; that is to say, it underscores the drama as good movie music ought to do. That said, it is also used as a unifying device. Rombi’s “Hymne des fraternizes” comes back several times during the film and most powerfully, in a hummed version by the German soldiers as they are sent to their doom in boxcars as punishment for participating in the unauthorized truce on Christmas Eve. Finally, Rombi’s music is used in the film to express thoughts and feelings, as it would in an opera. The music sung at the front by Nikolaus and Anna (voices dubbed by superstars soprano Natalie Dessay and tenor Rolando Villazon) serves this purpose, as does the bagpipe music on several occasions.

So there you have it; if Joyeux Noël is already almost an opera why write an opera based on it? And how to do it? Surely by sticking so closely to Carion’s screenplay, Puts and Campbell are inviting us to compare the opera to a film which is nearly operatic in itself and which has already enjoyed a huge success. 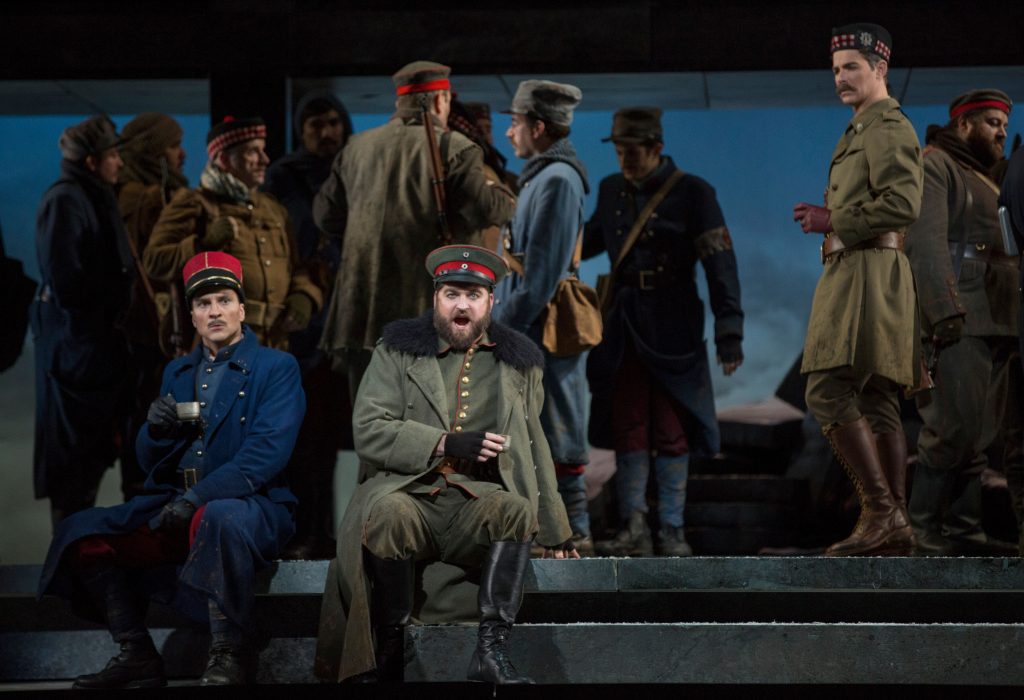 As I have said, Campbell’s libretto for the opera sticks very closely to the screenplay of the film. Notably absent in the opera, however, is a scene in which the English Bishop – played with chilling authority by Ian Richardson in the film – dresses down Father Palmer for fraternizing with the evil Germans. Obviously, Kevin Puts’ challenge was much greater than dispensing with this one scene. While he could not simply follow Campbell’s lead and copy Rombi’s music from the film, he did borrow what could not be omitted; for example, bagpipes, virtually part of the DNA of any self-respecting Scottish regiment, play a significant role in the film and also in the opera. And since the film’s leading characters are opera singers, the opera must include music for them to sing. But Puts doesn’t borrow any operatic music from the film. Instead, he comes up with some of his own in Eighteenth Century style.

The main body of Puts’ score for Silent Night is, however, clearly in Twentieth Century style. For the most part, it is highly chromatic and dissonant, and this makes sense for an opera about war. At other times, it is meltingly lyrical, as at the beginning of Act 2 which features some lovely solos for horn (Thomas Hale), cello (Anna Park) and oboe (Ian Bruce Davidson).

While Campbell and Puts have crafted effective musical theater, my first impression is that what really makes it work is the scenic design by Erhard Rom and the production by Tomer Zvulun. The basic setting in the film is trenches about 50 yards apart with the German forces on one side and the Scottish and French forces on the other. This setting would be difficult to stage in a theater, so Rom and Zvulun have come up with an ingenious solution, a three-tiered set with each of the armies on different levels, which allows for separate or simultaneous action on all three levels as required by the story. When the soldiers meet during the truce, they gather on stage level in front of the set.

This ingenious three-tiered set would not have worked nearly as well without Peter W. Mitchell’s complex and perfectly-executed lighting design. All the elements – set, staging and lighting – worked beautifully together to create a mesmerizing theatrical experience.

Puts and Campbell also had the benefit of a superb cast, several of whom – Troy Cook as Father Palmer and Andrew Wilkowske as Ponchel – had worked together in a previous production of Silent Night. In the lead roles were two fine artists making their Austin Opera debuts: German tenor Joseph Dennis was superb as the conflicted opera singer-soldier Nikolaus Sprink, and American soprano Hailey Clark gradually warmed to her task as his beloved Anna Sörensen.

Joyeux Noël and Silent Night are both powerful anti-war statements, and as such, they belong in the company of Benjamin Britten’s War Requiem. These are all works that will surely be played over and over again in years to come as reminders of the horrors of war, and of the need, whenever possible, to avoid war if the human race is to have any chance of survival.

For something more…As part of the World War I commemorations, New Zealand director Sir Peter Jackson (Lord of the Rings/The Hobbit) was asked to put together a documentary based on actual film footage shot during the war. The result, They Shall Not Grow Old, is a remarkable piece of work that brings this terrible war to life as never before. The original film clips, many of them made in the trenches, were in very poor shape, but using the latest technology, Jackson and his team managed to restore them to near-perfect condition. They colorized them in ways that would not have been possible even ten years ago, and coupled these pre-sound films with excerpts from audio interviews with men who had fought in the war and survived to tell about it