Long Center for the Performing Arts
Austin, Texas
May 2, 2019

Whenever lists are compiled of the most popular operas, La Bohème is invariably in the top two or three, with good reason. After more than a century, the beauty of its music and the appeal of its characters continue to win audiences. In Texas this week, Austin Opera breathed new life into this masterpiece with a traditional production directed by Alison Moritz that came alive with vivid characterizations, fine young voices and inspired conducting. 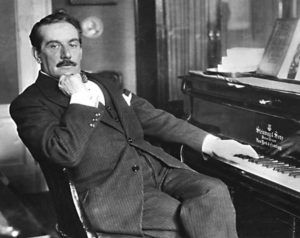 This Austin production of La Bohème, which originated at San Francisco Opera, with sets and costumes from Michigan Opera Theater, made no attempt to update the original conception by Giacomo Puccini, Giuseppe Giacosa and Luigi Illica given its premiere in Turin in 1896. The opera’s libretto is based on Henri Murger’s 1849 novel – later made into a play – Scènes de la vie de bohème (Scenes of Bohemian Life). When Puccini was working on La Bohème in the 1890s, he learned that Leoncavallo, the composer of I Pagliacci, was also working on an opera using the same source material. Leoncavallo tried to talk Puccini out of going ahead with his version but Puccini would not hear of it. As it happened, both operas were completed and performed but whereas Puccini’s has become a classic, Leoncavallo’s is all but forgotten.

Puccini’s librettists used characters and episodes from Murger’s novel and added touches of their own. Most of Acts 2 and 3 are found in neither the original novel nor in the play and the operatic character of Mimì is actually a combination of Mimì and Francine from Murger’s novel. For Puccini and his librettists, the main problem with Murger’s novel was that it had no unified plot. As the title of the novel suggests, it is a series of ‘scenes’ from Bohemian life. Using elements of Murger’s ‘scenes,’ Giacosa and Illica fashioned a story, unified by the music, with a beginning, middle and end. In a quasi-Wagnerian style, Puccini uses themes associated with particular characters and brings them back again and again as the plot develops. 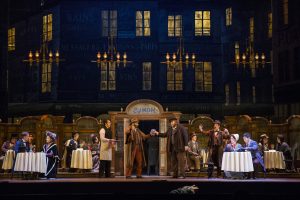 Acts 1 and 4 take place in a ramshackle Parisian garret shared by the writer Rodolfo and the painter Marcello. In the San Francisco Opera/Austin Opera production, this garret is represented as a tiny, claustrophobic space just large enough for a small bed, an easel, a stove, a small desk and not much more. The set designer wisely used only a small part of the stage for the garret. From the audience, what we see is a cutaway version of the garret. The rest of the stage is dark or nearly so. Act 2 takes place in the Latin Quarter Café Momus and the square in front of it. In contrast with the Bohemians’ tiny garret, this public space seems vast and teeming with urban life. Partway through this Act, the square in front of the café is cleverly transformed into the café itself complete with tables, white tablecloths and appropriate overhead lighting.

The ‘story’ of La Bohème revolves around the ill-fated Mimì: she comes to the door of Rodolfo’s garret, she and Rodolfo fall in love, their relationship has its ups and downs, and then she dies of consumption. For contrast, there is a secondary and highly volatile romance between Marcello and the flirtatious Musetta. From her first notes, it was obvious that soprano Elizabeth Caballero, Austin Opera’s Mimì in this production, was born to play and sing this part. She produces a fairly weighty sound with a darker color recalling Mirella Freni, one of opera’s great Mimìs, as well as robust expressive power when she needs it. As an actress, she captured perfectly Mimì’s vulnerability, along with the attractive femininity that so enraptured Rodolfo. As Rodolfo, Kang Wang in his Austin Opera debut, was also nearly ideal. He does not have a big sound but that is not really required for this role. His lyric tenor is exceptionally beautiful.

The philosopher Colline’s farewell to his coat in Act 4 nearly always stops the show but bass Ashraf Sewailam made this moment even more than usually poignant. Noel Bouley as Marcello and Susannah Biller as Musetta made a lively pair of ‘on again- off again’ lovers. 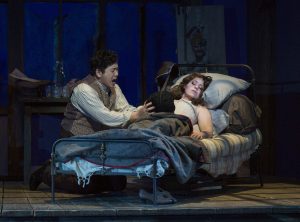 For all its familiarity, La Bohème’s music rarely gets the recognition it deserves. The score has some exceptionally memorable tunes – especially in Act 1 – but it has much more to offer. An underrated craftsman, Puccini brilliantly reiterates and transforms musical motives, and provides an orchestral texture of such transparency that the voices are always able to come through. The heart-breaking finale of the opera in which Mimì dies while her Bohemian friends fight back tears as best they can, would suggest to most composers huge waves of sound from the orchestra; Puccini goes the other way, giving us mostly quiet, far more effective music. In this scene in this production, the combination of minimal movement from the singers/actors on stage and the tender pianissimi in the orchestra was devastating. 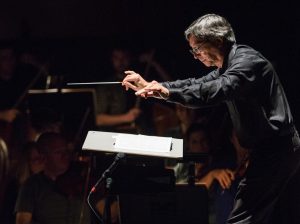 Peter Bay, longtime music director of the Austin Symphony has on a number of occasions mounted the podium at Austin Opera; for example, in André Previn’s A Streetcar Named Desire (2002), Verdi’s La Traviata (2002), Puccini’s Turandot (2003), and Mozart’s Le Nozze di Figaro (2005). After a considerable absence, he was back in the pit for this production of La Bohème and he was masterful. He moved the music along when it needed to press forward, he managed the numerous holds and rubati with absolute authority, he effortlessly guided his expanded vocal and orchestral forces through the coordination challenges in Act 2, and he drew remarkably expressive playing from his fine orchestra.

It was the young Arturo Toscanini who led the first performance of La Bohème; I think both Toscanini and Puccini would have been pleased to hear that 123 years later, Peter Bay of Austin, Texas demonstrated that the music of La Bohème is still alive and well.