You are at:Home»La Scena Online»CD and Book Reviews»Akoka: Reframing Olivier Messiaen’s Quartet for the End of Time (Pentatone) 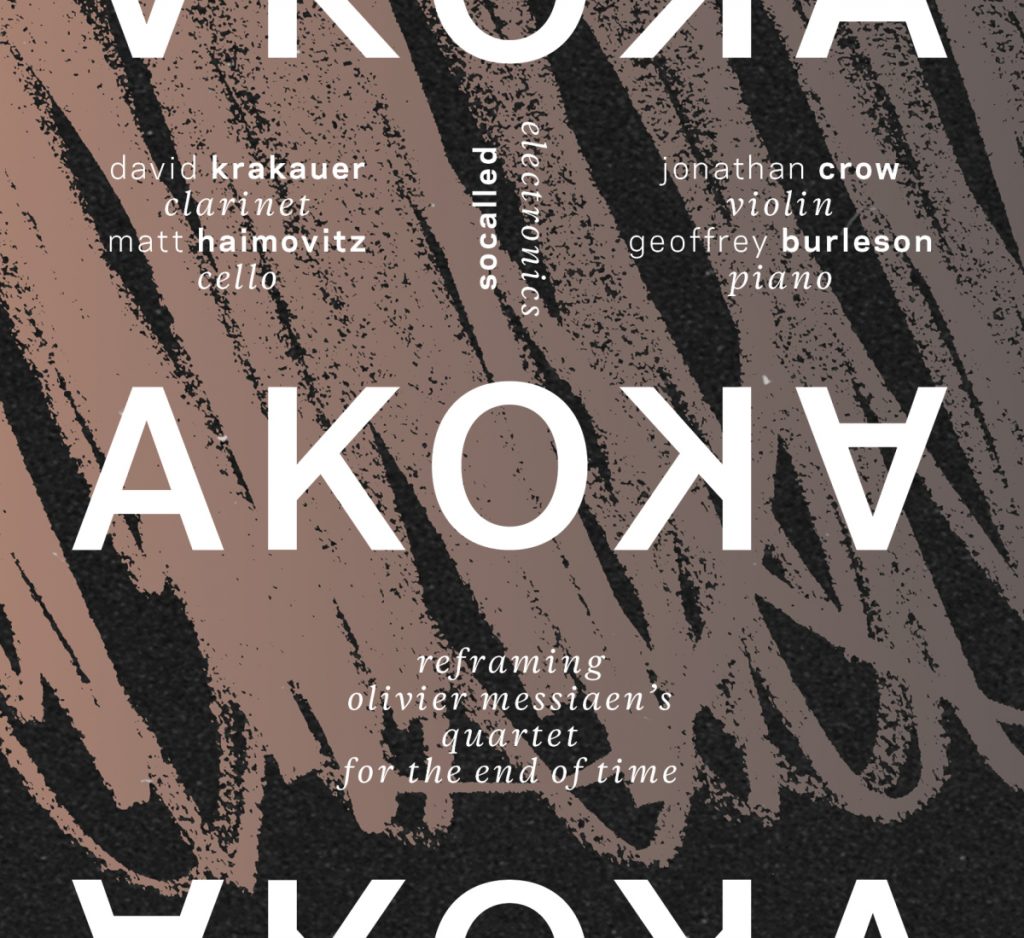 “Recorded live, AKOKA drives home the gravity and impact of Messiaen’s Quartet for the End of Time and affirms its relevance in the 21st century. As the forces of fundamentalism, intolerance, and violence intensify in today’s world, Messiaen’s prophecy seems all the more timely,” says cellist Matt Haimovitz. Quartet for the End of Time, written while Messiaen was interned in a labor camp during World War II, was first performed using instruments secured by a music loving German officer. Clarinetist David Krakauer, violinist Jonathan Crow and pianist Geoffrey Burleson join Haimovitz in a program that frames the emblematic work with two contemporary pieces inspired by its remarkable story.

The opening and title track Akoka is named after Henri Akoka, the clarinetist in the original performance of Quartet. Akoka was Jewish, and the work takes inspiration from this vantage point – of a Jewish musician performing a work inspired by the Book of Revelation during the disturbing events of the Holocaust. Akoka is essentially an improvisation on key elements in the performers’ interpretation of Quartet. The work opens with a harrowing Klezmer-inspired spiral of glissandos and trills, which gives way to Krakauer’s wailing solo over a driving, rhythmic backdrop. Then a bleak, spacious interlude segues seamlessly into the opening clarinet melody of Quartet, as if part of the same work.

Akoka is central to the brilliance of this album. Its buildup of intensity both draws us in and primes us for the challenging material ahead. What’s more, it opens our ears to important structural elements in the Quartet. The Klezmer-inspired trills come back in the declamatory opening to Vocalise pour l’ange qui annonce la fin du temps and the crushing clarinet soliloquy Abîme des oiseaux. The work unfurls as progressively intensifying plateaus of sound. Long, plaint-like, romantic lines reach ever upwards in vain in alternation with declamatory rhythmical passages punctuated by glissandos and trills, as if endless stark periods of melancholy alternating with outbursts of anguish and panic. Finally in Fouillis d’arcs-en-ciel two masses of glissandos and trills trigger the moment of transfiguration of the work’s climax, a plateau of strange, supernatural beauty finishing with a last outburst of Klezmer-inspired trills.

The last movement, Louange à l’Immortalité de Jésus, backs off from the climax in a swath of romantic warmth as if the light at the end of a tunnel. A moment of silence ensues before we wake up as if from a dream to the sounds of a train, of plaintive cantorial singing, of church bells, and a stopwatch. Socalled is best known for his hip-hop albums Ghettoblaster and Peoplewatching. On the closing electronic track Meanwhile…, the Montreal-based artist brings together sounds inspired by the circumstances of Quartet, the sounds of his own rich musical language, and improvisations by the four instrumentalists on extracts from Quartet. The end result is a kaleidoscope that underlines the continuing relevance of Quartet.

To say that Krakaeur, Crow, Haimovitz and Burleson give a masterful performance of Quartet is an understatement. Their virtuosic technique is always at the service of their musical intentions, and their unity of vision shines through the tightness of their ensemble. But the real magic of this CD is the programming.  Quartet for the End of Time is not an easy listen by any means. But Akoka and Meanwhile… are each responses and listening guides to Messiaen’s work; they enrich our understanding while standing as brilliant compositions in their own right. AKOKA is an album best experienced in one sitting, from beginning to end. I promise this concept album will change how you listen to Quartet.