I should have been on my way to Warsaw for the Chopin Competition but circumstances intervened and I find myself listening to unknown Poles of a different kind. The English violinist Jennifer Pike has Polish ancestry on her mother’s side. While rummaging a music shop in Krakow, she came away with unknown scores and turned them into a pair of fascinating releases. 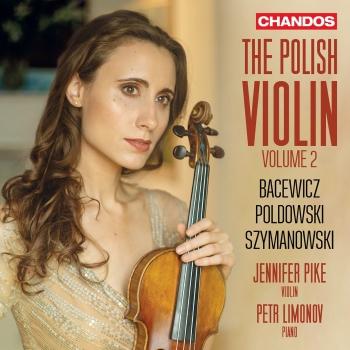 The familiar composers presented here are Karol Szymanowski and Grazyna Bacewicz, but not as we know them. Szymanowski’s 1904 violin sonata has yet to develop his trademark asperity, while his three Paganini Caprices of 1918 would make perfect encores if they weren’t so steeped in melancholy. All we hear of the austere Bacewicz is a solo violin Caprice of 1949 in which she appears to be keening for lost worlds – a sombre and thrilling contemplation.

The major discovery on this album is a composer called ‘Poldowski’. It was one of three names she used.

Born Irène Régine Wieniawska, daughter of the sensational Jewish violinist Henryk Wieniawski who died when she was an infant, she married into the lower English aristocracy and became known as Lady Irene Dean Paul. Under one name or other she enjoyed a career as a concert artist until her death, aged 52, in 1932.

She composed quite a bit as ‘Poldowski’ and her 1912 sonata in D minor is well worth a spin. Written in Brussels, where she moved after a divorce, it has something about it of the Cesar Franck sonata played by a seedy Simenon character on a fogbound Channel night. The atmosphere is so thick you’d need a charcuterie knife to cut it. Pike plays with cinematic sensitivity, lacking only a puff of smoke from Maigret’s pipe. Petr Limonov is the able accompanist. The sound is as lucid as the mood is murky. Don’t miss it.