One of the sadder casualties of the Covid shutdown has been the centenary plans for Astor Piazzolla (1921-1992), the Argentine composer whose music exquisitely captures the existential melancholia of our time. Piazzolla is so intimately identified with Buenos Aires that his wider relevance is often missed, but it is truly global.

Raised by Italian parents in lower Manhattan, he absorbed jazz, gypsy music and Jewish theatre. Taught by a Rachmaninov pupil of Hungarian origin, he returned to Buenos Aires for lessons with Alberto Ginastera and Raul Spivak, before finishing up in Paris with , who infused him with the worship of Stravinsky, Bartok and Monteverdi. All of these elements fed into his abiding passion for tango, expressed through its wheezing mouthpiece, the accordion-like bandoneon. 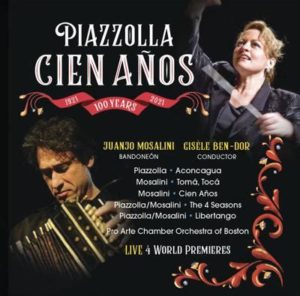 Piazzolla spent the rest of his life writing tangos in Buenos Aires, except for seven years of self-exile during the military dictatorship, 1976-83, which he spent in Italy. His music is instantly recognisable by ear – of how many composers can that be said? – and its abiding mood is grey, a thrilling shade of inbetweenness. Rostropovich and Kremer make him sound like smoke-ringed Shostakovich.

The present release consists of a 20-minute concerto for bandoneon and orchestra, dating back to his exile years, and four world premieres from his mountain of published manuscripts.

Gisèle Ben-Dor conducts the Pro Arte chamber orchestra of Boston, with bandeonist Juanjo Mosalini in a tour d’horizons of Piazzolla’s world – in particular his flaring ambivalence towards Buenos Aires and his elevation of tango from the dance floor to the art museum.

It’s a compelling hour-long tribute, recorded weeks before the Covid disaster. My doctor recommends taking it in small doses, no more than 20 minutes at a time. More might induce incurable pessimism and a thirst for dark-red wine.