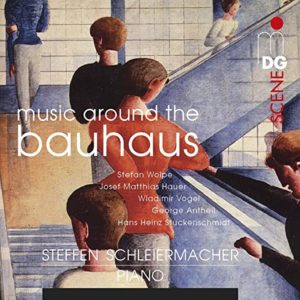 I wish more piano albums were like this, formed by an original idea and a lot of unfamiliar sounds to tweak the ear. All five composers performed were involved in some way with the Bauhaus that Walter Gropius founded at Weimar in 1919 to rethink the look of the built environment. Gropius was wedded to visual austerity even while he was married to Alma Mahler and the composers who gathered around him were not entirely a bundle of laughs. (One who does not feature here is Erwin Ratz, Gropius’s secretary, who went on to become a hugely controversial editor of the Mahler symphonies.)

We start here with Stefan Wolpe (1902-72), a Berliner who was Ratz’s best friend and who could, when he chose, forsake the atonal confession and write almost like Kurt Weill. He composed a deliciously entertaining set of marches that Steffen Schleiermacher plays as if they were cabaret songs, rich in irony.

Josef Mattias Hauer (1883-1959) claimed to have invented the 12-note row ahead of Arnold Schoenberg. On this evidence, he lacks the stringency of an ideologue and is tempted to imitate bird noises at the piano.

Wladimir Vogel (1896-1984), whose name means bird, was a Russian-born student of Scriabin and Busoni who was passionately interested in architecture and serialism. His close friends included the American George Antheil (1900-59) and the German music critic Hans Heinz Stuckenschmidt (1901-88). Vogel and Stuckenschmit were deadly serious types, until Antheil who was a total anarchist. Schleiermacher brings them together in a raging 1920s musical party. There are 27 tracks on this album and not one of them is dull. Some are barely music. Just listen.