You are at:Home»Classical Music»Contemporary»Lebrecht Weekly – Michael Nyman: The Man who Mistook His Wife for a Hat (Naxos) 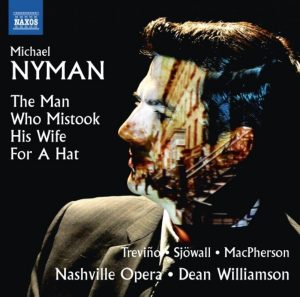 In the spring of 1985 I saw three opera world premieres in London in as many weeks. There was Busoni’s Doctor Faust in the restored original ending, Birtwistle’s breakthough opera The Mask of Orpheus and last, and smallest, Michael Nyman’s chamber opera on a troubling case history by the neurologist Oliver Sacks. I felt confident at the time that Nyman’s opera would be revived soon and often, but that’s not how it goes. Chamber operas are notoriously hard to get staged, falling as they do between too many institutional stools.

All the more reason, then, to welcome a new recording of this remarkable work, the story of a singing teacher who had descended so deep into dementia that he could not tell his wife from a piece of headwear. Only music can still reach him, enabling him to dress and feed himself. How the musical part of the brain stays alive when all else has atrophied is the puzzle at the core of Sacks’s diagnosis and the moment when he works out how the teacher succeeds in tying his shoes – a complex motoric function – is profoundly moving when seen on stage.

The drama does not transfer well to record, either in the original Sony recording of 1987 or in this new issue of a Nashville Opera production from November 2013. There is affecting singing by Matthew Trevino and Rebecca Sjöwall, the afflicted couple, and from Ryan MacPherson as the neurologist, but the piano sound is aggressive, the diction indistinct and the minimalist rhythms inconsistent. The premiere recording, now hard to find, is superior in every respect, not least for the composer’s direction from the piano. Still, the new release is a reminder of the need to revive a modern opera that manages to be both intelligent and emotional, a rare feat.