In the inexhaustible search for women in history, Isabella Leonarda (1620-1704) has emerged from the mists of Novara as the most prolific composer of the 17th century. Overshadowed by the likes of Allegri, Albinoni and Corelli, Leonarda was a Ursuline nun who dedicated each of her works to the Virgin Mary – as well as to some rich man or other who paid to have them printed. She entered the convent at age 16 and remained there until she died at 83, leaving more than 200 performable scores, mostly vocal and choral. The last, for voice and violin, appeared when she was 80. 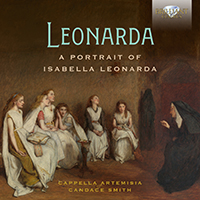 Do not be deceived however, by outward appearances. Leonarda was no cloistered sister or shrinking violet. As a member of a teaching order, she got out and about all over northern Italy and had family connections with some of the wealthiest houses. This may help explain her freedom to compose at a time when the church kept cracking down on innovation, and on women. Even so, there are three barren decades in the middle of her life that remain unplumbed. In her convent career she rose to become Consigliera and was clearly a force of nature.

These recordings by Candace Smith’s Capella Artemisia are not claimed to be world premieres but they are certainly the first works of Isabella Leonarda that I have ever come across, and I am very glad to have done so.

In amidst all the glorias and salves and glorias and dixits one hears the unmistakable sound of a creative musician having a frisky amount of fun.  Her soprano solos in O flammae could just as well have been love arias in a Monteverdi opera, and her violin solos are well up to Corelli’s and he was the tops of his time. All of Leonarda’s vocal quartets are written for mixed male and female voices which make one wonder what went on after dark at the convent in San Orsolo of Navarra. Be that as it may, Isabella Leonard demands attention from every serious music lover. She is fresh, sometimes original and challenging. Remarkable that a budget label like Brilliant should be the first to see her light.