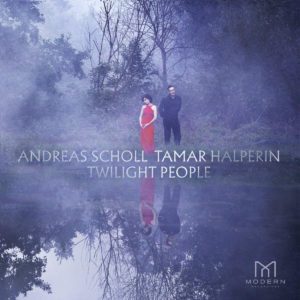 It can be good for an artist to take a break from a big label. The German counter-tenor Andreas Scholl has been recording faithfully for Decca for about a decade without ever giving an impression of calling the shots in his career. Yes, he left lovely tracks of Dowland, Purcell, Bach and Handel, but no more than you’d expect of someone as good as he is in the heart of his Fach and not really breaking new ground.

In the past couple of years Scholl has been working with his Israeli wife, the pianist and harpsichordist Tamar Halperin, along with various of their friends, in pushing out into the undefined territory that lies between folk music and composed art.

Their new album has a serenity alien to high-pressure releases, a meander down Britten’s setting of Salley Gardens or Copland’s At the River. There are three tracks of totally unexpected lieder by Alban Berg and a sheaf of all-too-familiar Vaughan Williams – familiar, that is, until Scholl starts to sing, blowing away stuffy smells of English drawing rooms and taking us somewhere higher than we thought this stuff could go.  This album is pure pleasure, so much so that I feel guilty sharing it because the label suits will wake up and put him back in a catalogue box.

Sign on to the blogfeed: www.slippedisc.com
Visit the website: www.normanlebrecht.com
Read my new book, Genius and Anxiety