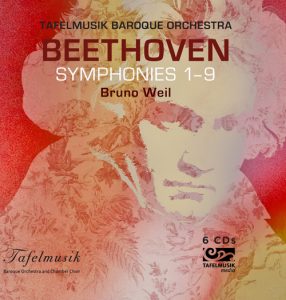 “Although the Beethoven symphonies are familiar to many music lovers, few have had the privilege to experience them as Tafelmusik and Bruno Weil have over the past many years. Our journey with Bruno exploring these great works has been a profound and intensely personal one,” says Music Director Emerita Jeanne Lamon, who was Music Director during the period when these recordings were made.

Recorded in Toronto at Koerner Hall, TELUS Centre for Performance and Learning, and George Weston Recital Hall, Toronto Centre for the Arts between 2004 and 2016, these performances chart Tafelmusik’s evolution as it expanded its repertoire to explore the music of classical and early romantic composers.

Tafelmusik’s first live performance of a Beethoven symphony (No. 2) in Toronto took place under the direction of Bruno Weil in 1993. Maestro Weil also directed the orchestra in performances of Beethoven symphonies at the Klang und Raum Festival in Irsee, Germany, during its 19-year tenure there as orchestra-in-residence.

Much admired by the international music press, Tafelmusik’s Beethoven interpretations have been praised for their “transparency of articulation and balance … remarkable precision, vitality and tonal focus. Beethoven benefits mightily from the silken strings, woodsy winds, clarion brasses and pinpoint timpani.”(Gramophone Magazine).

“We approach the Beethoven concerts and recording as if they were the very first performances, as though the music had been composed yesterday. There’s no sense of routine with Tafelmusik musicians and everybody’s playing with a full heart and a full soul and spirit. That is the secret to a great performance,” says Maestro Weil.

Led by Music Director Elisa Citterio, Tafelmusik Baroque Orchestra and Chamber Choir is one of the world’s leading period ensembles and Canada’s most-toured orchestra. Tafelmusik engages Toronto audiences with an annual season of more than 80 concerts in diverse venues across the city, as well as national and international audiences through an extensive schedule of tours and critically acclaimed recordings. The Tafelmusik Chamber Choir, under the direction of Ivars Taurins, was formed in 1981 to complement the Orchestra. Tafelmusik also seeks to transport audiences to the baroque and classical periods through adventurous cross-cultural collaborations, on stage with Toronto’s Opera Atelier, and underground at its new Haus Musik series. The orchestra’s musicians share their knowledge and experience through artist training initiatives such as the Tafelmusik Baroque Summer and Winter Institutes. Tafelmusik’s catalogue of award-winning recordings on the SONY, CBC Records, Analekta, and Tafelmusik Media labels have garnered nine JUNO Awards and numerous other recording prizes. Jeanne Lamon continues her association with Tafelmusik as Music Director Emerita.