New York, NY, November 8, 2016 – American cellist Julian Schwarz, together with Canadian pianist Marika Bournaki won the grand prize last week in a unanimous decision at the Boulder International Chamber Music Competition’s “Art of the Duo.” The annual competition received 156 applications from 25 countries with 22 duos performing at the competition. It culminated in a final round on Saturday, November 5th featuring nine duos. 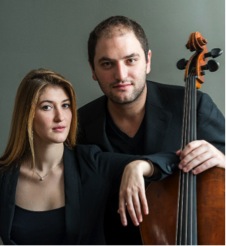 Cellist Julian Schwarz made his orchestral debut at the age of 11 playing the Saint-Saëns Concerto No. 1 with Seattle Symphony under the baton of his father, Gerard Schwarz. Further engagements have taken him around globe, and notable debuts this season include a 14-city China tour, the Rochester Philharmonic, San Antonio Symphony, the Buffalo Philharmonic, and last season, the Mexico City Philharmonic. Mr. Schwarz was awarded first prize in the professional cello division of the inaugural 2013 Alice and Eleonore Schoenfeld International String Competition in Hong Kong.

Marika Bournaki is a Canadian pianist who began an active performing career at an early age. She performed Beethoven’s Piano Concerto No. 1 under Yannick Nézet-Séguin when she was only 11. Canada’s Chatelaine Magazine named Ms. Bournaki of the 2011’s Women of the Year.

The Schwarz-Bournaki Duo has been seen in regular concerts in recent seasons, including several appearances at Bargemusic in New York City and their duo debut on the Embassy Series in Washington DC. Both artists are graduates of the Juilliard School and on faculty at Eastern Music Festival and the Lunenburg Academy of Music Performance. Together they have recorded the complete works for cello and piano by Ernest Bloch for the Milken Archive of American Jewish Music, and a duo recital disc is set for release later this year.

The Boulder International Chamber Music Competition presents Art of the Duo each year to encourage and support excellence and musical partnership between pianists and other instrumentalists between 18 and 35 years of age. The competition consists of two live rounds, as well as a final concert by the winners. Cash prizes total $15,000, and winners also receive numerous performance opportunities and engagements. Countries represented this year are South Korea, China, Iran, Germany, Taiwan, Israel, Japan, Bulgaria, Armenia, Italy, U.S., and Canada. The Art of Duo commissioned an original work by the internationally renowned composer Arthur Gottschalk. The twenty-two duos that came to Boulder for the live rounds of the competition received the score to this required piece one month prior to the start of the competition.