You are at:Home»La Scena Online»Newswire»Rufus Wainwright’s Hadrian is a bacchanalian banquet of sight and sound

Toronto – When the curtain rises for the Canadian Opera Company’s world premiere of Rufus Wainwright’s Hadrian on October 13, 2018 audience members will be the first to experience a sleek and provocative new work. The opera reunites the all-star creative team behind 2017’s Louis Riel, led by Canadian stage director Peter Hinton. With a libretto from Canadian playwright Daniel MacIvor, Hadrian explores the life and legacy of the Roman emperor, in the wake of his young lover’s death. The production draws from a number of contemporary influences to transpose Hadrian and Antinous’ story from the pages of history to the here and now, driving home the enduring relevance of this epic, ancient love story. Hadrian runs for seven performances on October 13, 17, 19, 21, 23, 25, 27, 2018. 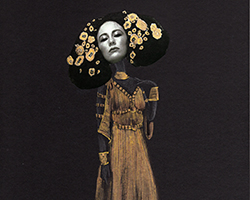 “It’s tremendously exciting to give birth to this new work,” says COC Music Director Johannes Debus, who conducts the COC Orchestra through a score with a rich and colourful orchestral palette. “Hadrian’s vitality, elegance, and beauty is disarming, effectively combining orchestral elements to convey the range of powerful emotions throughout the opera.”

Acclaimed director Peter Hinton leads some of the industry’s best design talent in bringing Hadrian’s story to life. Fresh off his work at this year’s Shaw Festival, where his production of Oh! What a Lovely War was called “educating, entertaining, heartbreaking” (Toronto Star),  Hinton says one of the biggest challenges in directing Hadrian is two-fold: “It’s about telling a story that people think they know – and telling a story that people don’t know at all.” He adds that Hadrian’s story is unique, consisting of equal parts history, romance, and politics. “There is passion and treachery, love and war, spirits and magic, and a journey through ancient Rome, Greece and Egypt. The opera chronicles this liminal place in history where Imperial Rome ended and the rise of monotheism began.”

Canadian Michael Gianfrancesco has created a sense of fluidity, using a set that changes in scale and composition to reflect an amorphous sense of time. The seasoned set designer says audiences can expect to see traces of Roman architecture that have been stripped of detail and rendered into glossy black surfaces. Gianfrancesco describes it as feeling like “a death space, a place of mourning, memories, and of remembering and recalling history.”

Canadian costume designer Gillian Gallow says that in order to create an extremely modern and high-impact feel, she aimed for a “dramatically Roman” aesthetic. “If we were to do this in a historical Roman sense, the colours would be much more muted,” says Gallow.  “But to make it theatrical, the colours we use are more intense, more extreme.” Other sources of inspiration include the gold leaf work of painter Gustav Klimt, a Greek-inspired fashion runway collection from Versace, and the vibrant, graphic imagery of ancient Minoan frescoes.

Hadrian features video projection designed by Laurie-Shawn Borzovoy and lighting designed by Bonnie Beecher. Beecher says strategic side illumination will appear to suspend artists in a sea of blackness.  “It creates the sense that they are floating and small in a large world,” she adds. “This, along with video, can have a very powerful effect.  The hope is to create beauty, with a heightened sense of time and place.”

Choreography from Denise Clarke adds further resonance to the depiction of a world where all is not what it seems. Dancers are woven throughout the storyline, representative of Hadrian’s desire for his love and also the mythical Ferrymen of the Nile, tasked with carrying souls to the underworld.

Hadrian is sung in English and Latin and presented by the COC with English SURTITLES™.

***Additional information about a series of public education and outreach events will be forthcoming in separate press materials issued in the coming weeks.

Single tickets for Hadrian range from $35 – $250 with Grand Ring seats available at $290 and $350. Tickets are available online at coc.ca, by calling 416-363-8231, or in person at the Four Seasons Centre for the Performing Arts Box Office (145 Queen St. W.). For more information on specially priced tickets available to young people under the age of 15, standing room, Opera Under 30 presented by TD Bank Group, student groups and rush seating, visit coc.ca.

ABOUT THE CANADIAN OPERA COMPANY

Based in Toronto, the Canadian Opera Company is the largest producer of opera in Canada and one of the largest in North America. The COC enjoys a loyal audience support-base and one of the highest attendance and subscription rates in North America. Under its leadership team of General Director Alexander Neef and Music Director Johannes Debus, the COC is increasingly capturing the opera world’s attention. The COC maintains its international reputation for artistic excellence and creative innovation by creating new productions within its diverse repertoire, collaborating with leading opera companies and festivals, and attracting the world’s foremost Canadian and international artists. The COC performs in its own opera house, the Four Seasons Centre for the Performing Arts, hailed internationally as one of the finest in the world. Designed by Diamond Schmitt Architects, the Four Seasons Centre opened in 2006. For more information on the COC, visit coc.ca.