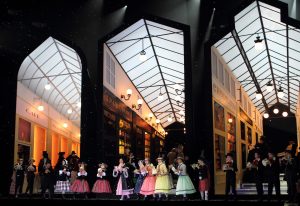 Associate director is Elaine Kidd. Designer is Stewart Laing. Lighting designer is Mimi Jordan Sherin. Movement director is Sarah Fahie. The production features the Royal Opera Chorus, under director William Spaulding, and the orchestra of the Royal Opera House, concert master Vasko Vassiliev. The broadcast of La bohème was directed for the screen by Rhodri Huw.

The series from London’s iconic Covent Garden theatre includes some of The Royal Opera and The Royal Ballet’s much-loved classical repertory, as well as four brand new productions. The season is distributed to cinemas in collaboration with Trafalgar Releasing.

These broadcasts originally screen live in the United Kingdom and subsequently run as recorded presentations in the United States and Canada on a range of dates.

Trafalgar Releasing works with some of the world’s most renowned houses & companies; distributing high-profile arts content to cinemas worldwide from the Royal Shakespeare Company and the Royal Opera House. Additionally distributing in the UK, content from the Bolshoi Ballet, Glyndebourne, the National Theatre and the Metropolitan Opera.