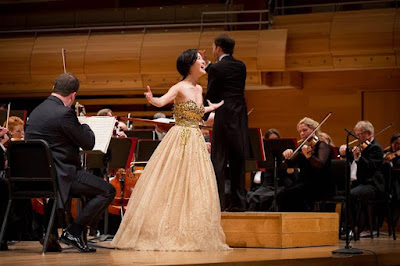 Let’s get the suspense out of the way. South Korean soprano Hyesang Park took the Day 1 Finals of the 2015 Montreal International Musical Competition (MIMC). From the first notes of her opening aria “Je veux vire dans ce reve” from Gounod’s Romeo et Juliette, we knew her voice would soar above the orchestra, and it unfolded as expected, with a spontaneous final standing ovation after her last aria.

Park’s programme was perfectly planned, concluding with the mad scene from Donizetti’s Lucia di Lammermoor. The repertoire in between, a Mozart concert aria, Dupac’s Chanson triste and Rachmaninov’s Ne py krasavitsa, pri mne, seemed just like filler, as her diction was not always the best. Park has a clear and well projected voice capable of a wide dynamic range. What sets her apart is her ability to use her instrument at the service of story-telling, and she accomplished that with musicality, and nuanced facial and body expression. Technically, she sings with an innate legato and she is capable of effortless swelling tones. The long mad scene from Lucia is a risky way to end a competition programme and Park carried it off almost effortlessly (9 out of 10 on the high notes). It was the perfect end to the evening, leaving the audience smiling home.
However, the conclusion wasn’t so clear at the start for audiences following the competition from the quarter and the semifinals. Some favourites in the smaller Bourgie Hall (444 seats) didn’t transfer well to the larger symphonic size Maison symphonique (2000 seats), as was the case for the first two finalists on Day 1.
French soprano Anais Constans exhibited a coloratura soprano with a nice legato. It just seemed a bit light; in Bourgie Hall, her voice sounded bigger. Her show piece “Caro nome” from Verdi’s Rigoletto was taken rather too slow and consequently, it seems more like a vocalise, void of rapture. As I mentioned, she has nice control and a good legato, but the moments I was anticipating a forte or fortissimo were not met.
Macedonia baritone Vasil Garvanliev captivated the semifinals with an entertaining recital full of vocal variety and dramatic flair. I had found his voice grainy and he tended to croon; by this I meant that his voice lacked a core, it seems all overtones with a missing fundamental sound. I worried that this would limit his ability to communicate in the big hall, and I was proven right. His aria from Handel’s Rinaldo didn’t make much of an impression over the orchestra, and the famous aria “Kogda” from Tchaikovsky’s Eugene Onegin left us wanting for a bigger, clearer voice (where is Dmitri Hvorostovsky when you need him). Garvanliev’s drama showed in Ravel’s cycle Don Quichotte a Dulcinee, but the serenade “Deh vieni alla finestra” from Mozart’s Don Giovanni lacked seduction as it sounded muted.
Mahler’s Rucket Lieder seemed like an odd choice to end his performance, but it actually helped his cause. I give Garvanliev a B for “Ich atmet’ einen linden Duft” because he performed it so restrained; it’s supposed to be a serenade and he sang it like a lullaby. Between “Blicke mir nicht in die Lieder” and “Liebst du um Schonheit,” a true musician finally came through, and suddenly a more solid forward sounding voice was heard.
It then suddenly came to me that maybe Garvanliev was not a baritone after all. In the 2002 inaugural MIMC, then baritone Joseph Kaiser sang a high note that rang out, and I told him afterward that he could be a tenor. I guess enough people told him that, as in just two years, he re-emerged as a lyrique tenor winning competitions and making it to stage at the Met. Last night, I heard something similar from the Macedonian. He sang a moving “Ich bin der Welt abhanden gekommen”, but what amused me most was the effortless high F at the end. The closing “Um mittenacht” was forceful. So I’ll put it out there and go on the record: Vasil Garvanliev is a tenor.
The competition concludes tonight with three more competitors: South Korean tenor Keewoon Kim, Japanese baritone Takaoki Onishi and Canadian soprano France Bellemare, whose semifinal perforamnce of Dvorak’s Song to the Moon reminded me of Canadian Marianne Fiset who won the 2007 MIMC.

The winners’ Gala will take place on June 5 at 7:30 PM at Montreal’s Maison Symphonique.
www.concoursmontreal.ca