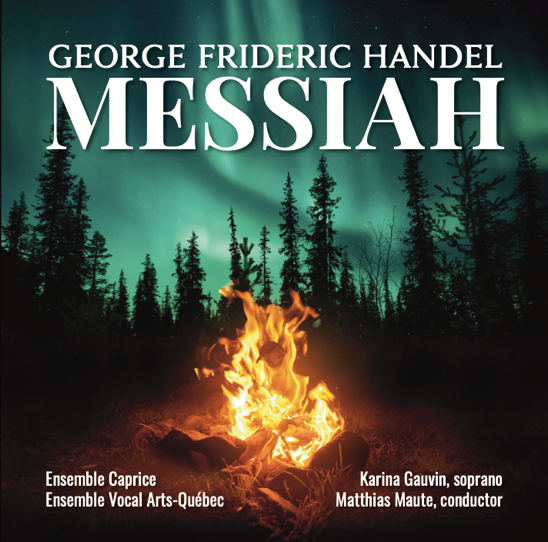 November 5, 2021 … Leaf Music is proud to present a new recording of highlights from Handel’s Messiah, featuring soprano Karina Gauvin and bookended by two new choral works by Montreal-based composers, Jaap Nico Hamburger and Matthias Maute. Maute also conducts Ensemble Vocal Arts-Québec and Ensemble Caprice in these vibrant new choral recordings, which will be available for purchase, download, and on all streaming platforms as of November 5, 2021.

Matthias Maute conducts Ensemble Vocal Arts-Québec and Ensemble Caprice in performances of Handel’s Messiah throughout the month of December, including Maison symphonique in Montreal (Dec 12) and Palais Montcalm in Quebec (Dec 17). See the complete schedule here.

While Handel’s masterpiece has been heard and recorded often, the musicians experienced a feeling of renewal this year: “During the live recording, in an empty hall, it felt like we all were hearing this famous oratorio for the very first time,” says Maute, “After the long drought brought on by the pandemic, this first reunion of choir and orchestra in a wonderful concert hall felt like the rebirth of the spirit of music!”

While sanitary restrictions necessitated a small number of singers – the ensemble has just 12 voices – this is not out of character for the work, though many are used to hearing massive musical forces for the bombastic Hallelujah chorus. Handel himself had a choir of only 16 singers at his disposal when he travelled from London to lead the first performance of his oratorio in 1742 in Dublin. “The flexibility and lightness of a12-voice choir reveals fascinating layers of the work,” comments Maute.

The new recording also includes a short dialogue between Handel and two living composers, with new choral works from the two Mécénat Musica composers in residence, Jaap Nico Hamburger’s Hope and Belief, on a Yiddish text by Isaac Leib Peretz, and Matthias Maute’s O magnum mysterium, which aims to grasp something of the elusive mystery of music. These two works set the theme for the Mécénat Musica Mini-Concerts Santé in the summer of 2020, which delivered music to thousands during lockdown, spreading the magical force of music to help get through the crisis.

“imaginative, even powerful; and the playing is topflight.” Known for an innovative and adventuresome approach to an expanding musical repertoire, Ensemble Caprice has performed in 11 festivals, embarked upon its first Latin American tour, and made its third trip to China in addition to an inaugural tour in South Africa. Instigator of the Mini-Concerts Santé, Ensemble Caprice received the Opus Award for Musical Event of the Year 2020 for this project. Through 1,700 musician hires of professional singers and instrumentalists who perform with 184 classical music organizations, $464,000 were paid directly to the artists who were out of work due to COVID-19.

In 2019, Maute was named Artistic Director of Ensemble vocal Arts-Québec, a professional choir steeped in the grand tradition of choral music in Quebec. The choir’s director, Maute, received one of his two JUNO awards for his album with choir, entitled Vivaldi and His Angels, From 2021 to 2023, Ensemble Vocal Arts-Québec is embarking upon a unique project: Art Choral, the history of choral singing through six centuries.

Renowned for her performances of Baroque repertoire, Canadian soprano Karina Gauvin sings the music of the 20th and 21st-centuries with equal success. She has received many prestigious distinctions, including “Soloist of the Year,” awarded by the Communauté internationale des radios publiques de langue française, the Virginia Parker Prize from the Canada Council for the Arts, and the Maggie Teyte Memorial Prize in London. Performing in opera and with symphony orchestras throughout the world, Gauvin boasts a discography of over 50 titles, garnering three Grammy nominations, and multiple JUNOs and Opus Prizes.