You are at:Home»La Scena Online»Newswire»Gülsin Onay gave a ‘Serenade to the Stars’ at Gümüşlük
Advertisement / Publicité 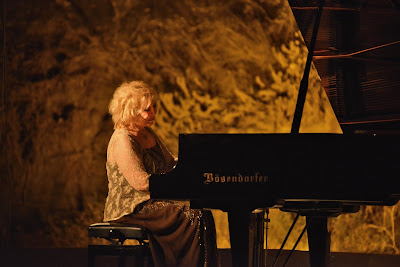 The Gümüşlük Ancient Stone Quarry was host to another virtuoso performance last night. World renowned pianist and co-founder of the Festival Gülsin Onay, for the twelfth year gave her audience an unforgettable concert as part of the 12th International Gümüşlük Music Festival sponsored by DenizBank, performing works by Beethoven, Saygun, Chopin, Debussy and Franck.

Since the beginning of the Festival, classic music lovers have been waiting with interest for the ‘Serenade to the Stars’ concert. Gülsin Onay stayed on stage for over two hours, in front of an enthusiastic audience of a thousand people and received a standing ovation at the end. Having performed on stage in 68 countries on 5 continents, in the most prominent music centers with the world’s leading conductors and orchestras, State Artist Onay’s concert under the stars in Gümüşlük’s ancient stone quarry’s magical atmosphere turned in a concert that will never be erased from the combined memory of the audience.

At the beginning of her concert, Gülsin Onay spoke mentioning the continuing terror actions going on, “again our hearts are crying blood, but as we said before, the best response towards terror is art. I want to dedicate the first piece of this night, the ‘Moonlight Sonata,’ to our martyrs,” she said.

Gülsin Onay created two parts of the concert under the theme ‘Serenade to the Stars.’ In the first part the artist started with Ludwig van Beethoven’s “Moonlight Sonata” in C sharp minor, op. 27 no. 2, playing the movements “Adagio sostenuto,” “Allegretto,” and “Presto agitato.” On a Gümüşlük night filled with bright stars Gülsin Onay continued the concert playing Ahmed Adnan Saygun’s Sonatin Op. 15 with movements “Allegro,” “Adagio con moto,” and “Horon (Prestissimo). The pianist finished the first half of the concert with the Ballad No. 3 in A-flat major Op. 47 by F. Chopin. The second half of the program continued with three works by Claude Debussy. The State Artist performed first “Masques,” “Ballade,” and then “Danse” by the composer. To complete the concert program Gülsin Onay played “Prelude” and “Chorale et Fugue” by César Franck. However Onay was invited back to the stage by the very enthusiastic audience and played a Nocturne by F. Chopin as encore. But then Gülsin Onay actually closed the concert with a surprise: she invited the twelve year old Tuna Bilgin, one of her students of Gümüşlük Festival Academy on to the stage. The Bilkent Üniversity Music and stage arts Faculty student, expertly performed Claude Debussy’s “Claire de Lune” on the Festival stage earning himself warm applause from the audience.