Founded in 1956, Les Petits Chanteurs du Mont-Royal (Artistic Director Andrew Gray), faced a financial threat to their future earlier this year when the Montreal School Board (CDSM) withdrew their support. Following a public outcry, the Quebec government stepped forward to support the cherished Montreal institution, which provides superior musical training to over 200 students, ages 8 to 17, for the next three years.

A Canadian composer of Bulgarian origin, Vania Angelova’s Pagan Dance on Burning Coals evokes the spiritual atmosphere of an ancient pagan ritual from Bulgarian folklore. In “Nestinarstvo,” barefoot dancers enter a trance and perform a dance on burning embers. “The rhythmic musical streams spark the mystery of the fire’s energy and of the dancers in ecstasy,” comments Angelova, “I explore the correlations between Bulgarian folk rhythms, irregular meters and contemporary orchestral language.” The work was noted as one of the best compositions of the year by CBC Radio Canada in 2008. 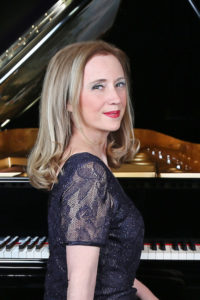 Pianist Anne-Marie Dubois is the guest soloist for the Bach-Busoni Piano Concerto in D Minor BWV 1052. Deemed a “striking virtuoso” by La Presse, Dubois has performed with orchestras across Quebec and in concert halls from Beijing to New York. A nine-time laureate of the Canadian Music Competition, Dubois’ “warm interpretation … range and power” (Fanfare Magazine) can be heard on recordings of music by Liszt, Chopin, and others.

The Sunday concert also include the second installment of the OCM’s new Young Stars series, showcasing the most talented young classical musicians in Montreal. Tariq Harb was named “Canada’s next classical guitar superstar” by CBC Music. The winner of major guitar competitions in Paraguay,Montreal, and Tokyo, Harb has performed in prestigious halls in North America, Europe, the Middle East, South America, and Asia. A Jordanian-Canadian with Palestinian roots, he has recorded four albums to date. Tariq Harb performs in the lobby of Salle Pierre Mercure, beginning at 2:15 pm(free of charge to ticket holders).

For its 80th anniversary season, the McGill Chamber Orchestra was renamed Orchestre classique de Montréal (OCM). Founded in 1939 by violinist, conductor, and composer Alexander Brott and his wife Lotte Brott, the OCM quickly became one of Canada’s most established chamber orchestras, touring to five continents, recording extensively, and appearing regularly on radio and television. Now led by Boris Brott, OC, OQ, the elder son of Alexander and one of Canada’s most internationally renowned conductors, the OCM is a vibrant, innovative, and flexible ensemble consisting of the city’s best professional musicians, which presents concerts throughout the year in the finest halls of Montreal. Fulfilling its mission of celebrating diversity and inclusivity, the OCM has created the program Music for Everyone which enables collaborations with numerous new immigrant communities and Montreal organizations in making OCM’s performances accessible to all. Student ticket prices remain at the very low price of $10 for the majority of OCM concerts.

The OCM is proud to acknowledge BMO Bank of Montreal as the 2019-20 Season Presenter.