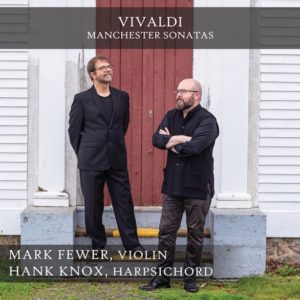 For Immediate Release, January 7, 2020 … Leaf Music is proud to present a new recording of Vivaldi’s Manchester Sonatas featuring violinist Mark Fewer and harpsichordist Hank Knox. This is the first Canadian recording of the “Manchester” sonatas of Antonio Vivaldi (1678–1741), a masterful collection of 12 works brought to light only in 1973. A follow up to their acclaimed 2018 recording of the Sonatas for Violin and Harpsichord by J.S. Bach, this new recording from Fewer and Knox is available as of January 17, 2020.

These remarkable sonatas changed a great many hands over the centuries. When Cardinal Ottoboni – a patron of Vivaldi’s – died in 1740, a large number of manuscripts from his private collection were purchased by English classical scholar Edward Holdsworth. These manuscripts were then passed on to Charles Jennens, librettist of Handel’s Messiah. The scores came into the possession of several more collectors before coming to auction at Sotheby’s in London in 1918 and were acquired by renowned musicologist Newman Flower. When Flower died in 1964, his musical holdings were purchased by the Manchester Public Library, attracting the international attention of scholars and the media alike; Flower’s reputation as an eminent Handel scholar implied that important revelations concerning the musical giant were forthcoming. However, a nearly exclusive focus on Handel resulted in the neglect of some of the other manuscripts, including these sonatas by Vivaldi which, despite being housed in Manchester’s Henry Watson Music Library from 1965 onward, were only discovered by British musicologist Michael Talbot in 1973.

The 12 “Manchester” sonatas, heard on the new album as arranged and recorded by Fewer and Knox in January 2019 at Eglise St. Augustin in Mirabel, Quebec, represent a high point of Vivaldi’s chamber music. The violin part offers complex compound melodies while the bass focuses primarily on its harmonic role, with both instruments free to improvise on the written score. Gramophone calls the sonatas “music of great beauty and vitality which will delight most if not all lovers of the late baroque.”

Known for his exceptional versatility, violinist Mark Fewer has been described as “intrepid” (The Globe and Mail) and “profound” (The WholeNote). His musical diet includes performances from the early baroque to the avant-garde, performing worldwide in famous halls such as Wigmore, Carnegie, and Pleyel, to smaller venues such as Le Poisson Rouge (NY), Bartok House (Budapest), and The Forum (Taipei). As a soloist, he has performed with the symphonies of Vancouver, Edmonton, Toronto, Quebec, San Francisco and Melbourne, as well as with groups such as the Fodens-Richardson Brass Band (UK), the Zapp Quartet (Amsterdam), and as a featured guest with Stevie Wonder and his band. He was a founding member of the Duke Piano Trio, has been a member of the Smithsonian Chamber Players for over 15 years, and was violinist with the St. Lawrence String Quartet at Stanford University. Artistic Director of the SweetWater Music Festival for 16 years, Fewer was appointed Artistic Director of Stratford Summer Music in 2019. A Juno and Prix Opus winner, he is currently Associate Professor of Violin at the University of Toronto.

Hailed internationally for his “colorful, kinetic performances,” Hank Knox performs on harpsichord in concert halls, churches, museums, galleries and homes around the globe. A founding member of Montreal’s Arion Baroque Orchestra, with whom he has toured North and South America, Europe, and Japan, Knox also regularly performs and tours with Tafelmusik Baroque Orchestra, Les Violons du Roy and l’Orchestre symphonique de Montréal, among other groups, ensembles and orchestras.  He has released a number of acclaimed recordings on rare antique instruments as well as copies of historical instruments. He teaches in the Early Music program at McGill University where he conducts the McGill Baroque Orchestra and has also directed a great number of baroque operas.