In the fiction feature Genèse, Quebec filmmaker Philippe Lesage paints a picture in film and music on the subject of first love. It stars Noée Abita, a 2018 César révélation, and Théodore Pellerin, who won the Québec Cinéma Iris de la révélation de l’année and whose fame is growing fast. We interviewed the quirky, literary filmmaker.

Written and directed by Lesage, Genèse had its world premiere in international competition at the chic Locarno Festival. It has been well received by the international press and garnered prizes at festivals worldwide. Over the last four months the film has won the Louve d’or for best film and best actor (Théodore Pellerin) in the international competition at the Festival du nouveau cinéma de Montréal; the best film, best director and best actor (Pellerin) awards at Spain’s Valladolid International Film Festival; best film award at Mexico’s Los Cabos International Film Festival and the Bayard for best actor (again, Pellerin) at Belgium’s Namur FIFF [festival of francophone cinema]. 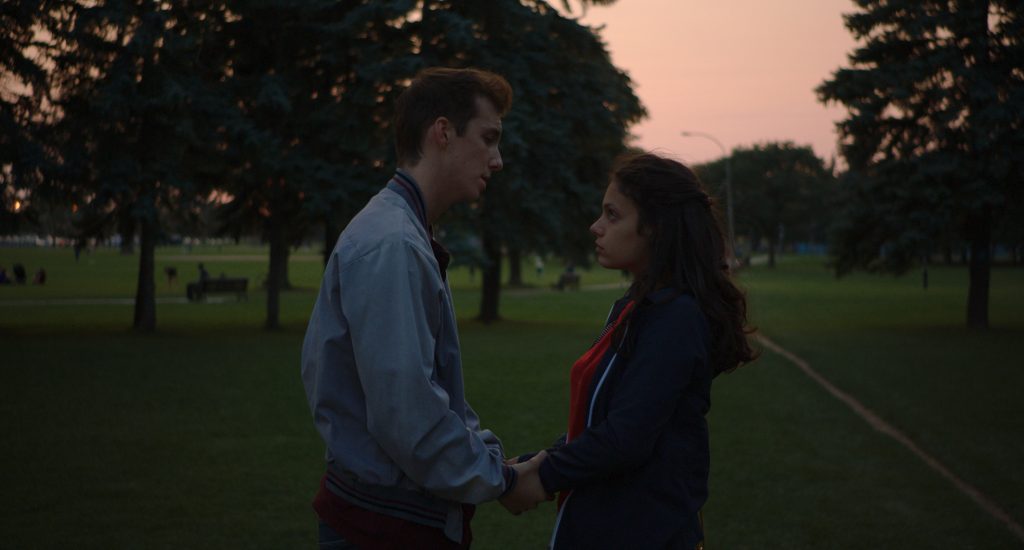 We reached Lesage in Tromsø, a Norwegian town above the Arctic circle, at a festival where Genèse was pursuing its sparkling career (it has already been invited to around 30 festivals in 2019). He said that for him there was no distinction between documentary and fiction. He defines himself as a filmmaker and although he enjoyed making his documentaries (Ce cœur qui bat won a Jutra Award in 2012), fiction writing gives him more satisfaction, if only because of the freedom of script-writing combined with freedom of control over image.

After studying literature, Lesage veered away from the path (Concordia or UQÀM) taken by his peers, choosing instead to join an intensive program at Denmark’s European Film College, where he later taught. “We were in a completely isolated place,” he recalled. “That time of unusual intensity was a pivotal moment in my life, but I also owe a huge debt to my old teacher of creative writing, Yvon Rivard.” For Lesage, writing is the basis of everything. Although he hasn’t had anything published, he writes every day, and the minimalist tone of his films borrows from literary restraint. Lesage wants to use accepted literary conventions to disrupt narrative structures and resist the cooker-cutter films that are drowning us: “TV series like the ones on Netflix are the death knell of artistic originality.”

Lesage wouldn’t be the filmmaker he is today without his experience in documentary and cinéma direct. “I give my actors a lot of freedom and the opportunity to improvise – I also try not to encumber myself with heavy equipment.” For several years he filmed alone, the camera on his shoulder. He prefers to take longer filming, with a small team in order to preserve the desired thread of authenticity. He also takes great care with casting: “Properly assigned parts mean half the battle is won, so I insist on doing the casting myself.” He takes the time to find unknown faces and is happy to have helped discover young actors like Édouard Tremblay-Grenier and Théodore Pellerin. Both were in Lesage’s first hyperrealist fiction feature, Les Démons (2015 Gilles-Carles and Luc-Perreault Awards for best Québécois film judged by the Association québécoise des critiques de cinéma; winner of San Francisco’s Golden Gate Award; TIFF Top Ten; one of Variety’s ten best films of 2015). Les Démons showed the emotional rollercoaster of preadolescence, a time of doubts concerning sexuality, when teenagers begin to realize that the violence of this desire that makes adults tick is capable of destruction. But whether the story is inspired by those sometimes unreal perceptions that unsettle children, or whether it’s a love story, the key is to look for as yet undiscovered faces. “I know auditions are hard for actors, but I don’t summon them for nothing,” he says. “I think about each person I invite for audition and each casting choice is done with extreme care.”

Laylou (2013) was Lesage’s fourth feature documentary and filmed a group of adolescents one summer. Les Démons looked at 11-year-olds. Genèse has characters of varied ages, but the main protagonists are under 20. Has the filmmaker any scores to settle with the past? No, Lesage isn’t interested in film as therapy: “That time of life fascinates everyone, because it’s intense and passionate.” Do you remember how the hours dragged by when you were 16 or 17? One teenage year is worth five adult years! Certainly, Lesage likes working with young actors, because in a way they’re easier to direct, more open. “They understand what’s natural. They haven’t learned any tics and haven’t any bad habits to unlearn, as is too often the case with more experienced actors.” For example, his actors quickly understood the literary, measured tone that Lesage likes and aims to recreate in his films. Getting there requires much preparation, but once the work is done, the results are outstanding. “I’m interested in the fluid nature of sexuality and the way it isn’t forced – for example when the character Guillaume (Théodore Pellerin) confesses his obsessive love for his male friend.” The world seems to want to punish them and bring them into line, but they’re just going their own way with simplicity and integrity. A bit like heroes in Dostoevsky, they follow their passions right to the end. “Youth can’t disappoint, since it’s the future,” the filmmaker says firmly. 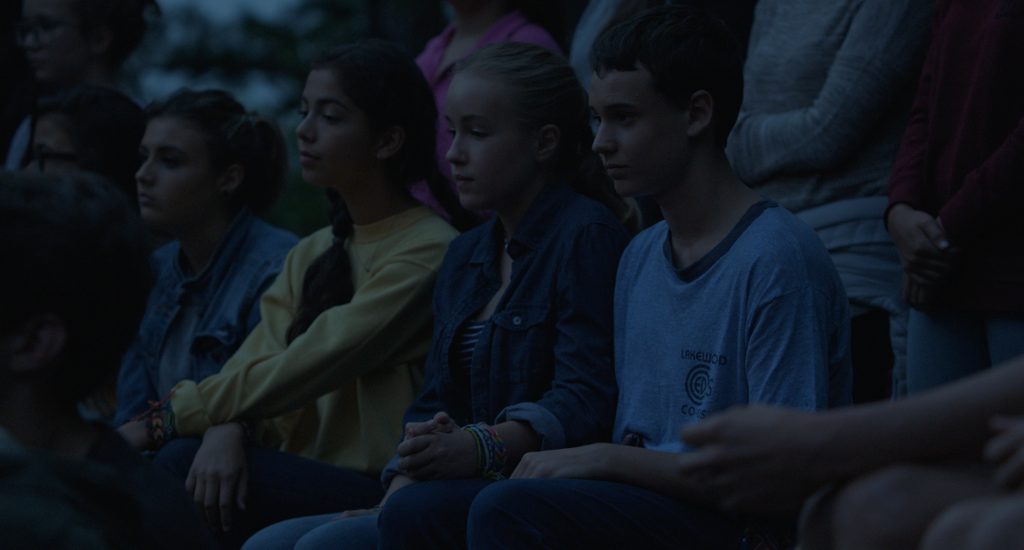 Genèse is a film in three acts examining first loves. It has romance, depth and empathy. “We all remember our first love, paralyzingly strong, so that we drown under the tsunami of stimuli.” Love shines and burns; an ambiguous erotic atmosphere settles in while society’s stereotypes quietly assert themselves. Like his hero, Lesage boarded at a private school where boys from a very young age were shown which direction they were to take. They had to be masculine, with all the stereotypes that involves. Of his boarding school years, he recalls powerful, exclusive friendships that tolerated no rivals. A sort of crypto-homosexual intensity, surrounded by undeniable jealousy, held sway in the school: “I wanted to look at this turbulent subject and include its choral aspect.”

Music and the honesty of youth

Abandoned by the boy she loves, the character of Charlotte, who experiences chance, transitory liaisons, is inspired by someone Lesage knew: “I strongly identify with this female character, and when I realized that one female friend in two had experienced some form of violence, I wanted to share this terrible fact with the public by showing it frankly.” The filmmaker doesn’t let the boys off lightly; they don’t give Charlotte enough room to be herself. Her first boyfriend, played by Pierre-Luc Funk, only notices her because she’s interested in what he does (photography), while the second puts her down mercilessly. But Charlotte, who is also Guillaume’s half sister, retains her integrity and refuses to be treated like a doormat. The sibling relationship is important to Lesage: “In Genèse, as in Les Démons, the parents are sometimes cut off from reality and their children, so sympathy between brothers and sisters is a haven. I benefitted from that and for me it’s been very positive.”

Forget about a youth obsessed with games and electronic gadgets; Lesage shows us complex young people, curious about art and books. The result has a rather timeless elegance. J. D. Salinger, famous for his novel of adolescence, The Catcher in the Rye, casts a melancholy shadow over the film, with its emotional fluctuations and disenchantment with the irreparable loss of childhood innocence. Music, essential to the filmmaker’s work, is omnipresent. He wants it to envelop the audience and affect their pulse. “When I’m writing a new script I make a playlist of pieces that inspire me and I imagine the scenes with that music.” And much later, once shooting is over and editing has begun, when the music meets the images and it all comes together, that’s magic! “Those are moments of pure joy – nothing makes me happier.”