You are at:Home»Scena Arts»Circus»Cirque Éloize: At the forefront of contemporary circus for 25 years

To celebrate its 25th anniversary, Cirque Éloize presents Hôtel, its 15th original production, co-produced with Place des Arts and TOHU. This is a time to reminisce about an amazing journey with Jeannot Painchaud, artistic director and founding member of the famous Montreal contemporary circus company.

Did you know that Painchaud, Cirque Éloize’s leading light, came across the magic of the circus by accident? Born in Montreal but raised on the Magdalen Islands, the young man went to Gaspé to admire the tall ships in 1984.

At the bend of a street, he saw clowns perched on stilts. It was the first parade organized by the Cirque du Soleil and it was love at first sight. Two months later, the aspiring adventurer enrolled at the École nationale de cirque de Montréal (National Circus School of Montreal) and set sail for a lifetime in the circus. 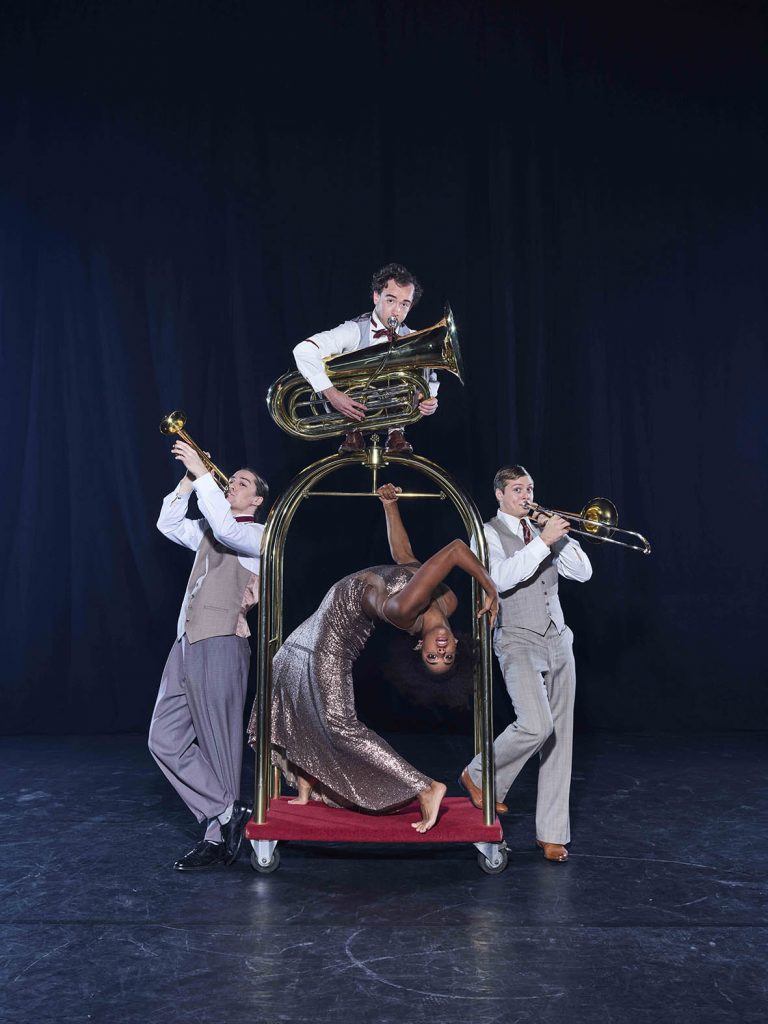 In Acadia and the Magdalen Islands, éloize is a word that means a flash of heat or lightning and evokes storms too far away to hear thunder roar. The name of Painchaud’s company pays tribute to the Magdalen Islands, since they have so carefully watched over the destiny of the founding members. It was in fact in honor of the 10th anniversary of the community radio of the Islands that our Madelinots, still students in Montreal, concocted their first show. The idea of the Cirque Éloize was born in 1991. January 1992 saw the creation of the number Le trio des îles with Jeannot Chiasson, Alain Boudreau and Damien Boudreau as well as Painchaud on an acrobatic bicycle. The two numbers won the silver and bronze medals at the Festival mondial du cirque de demain in Paris. Painchaud, Cyr and Claudette Morin registered the name of the company in 1993.

Three versions of Cirque Éloize, the company’s eponymous founding show, premiered between 1991 and 1994. Designed to be played on a stage rather than a traditional circus track, the first two are the result of collective work, which involves all the artists in the process, under the direction of Painchaud. The desire and the curiosity to work with the other forms of art are remarkable.

Directed by Pierre Boileau, the third version of the show brings the troupe to its first real breakthrough on the American market. Three weeks of performances follow the opening of the New Victory Theater on Broadway and it’s a triumph. The international adventure of Cirque Éloize is launched. 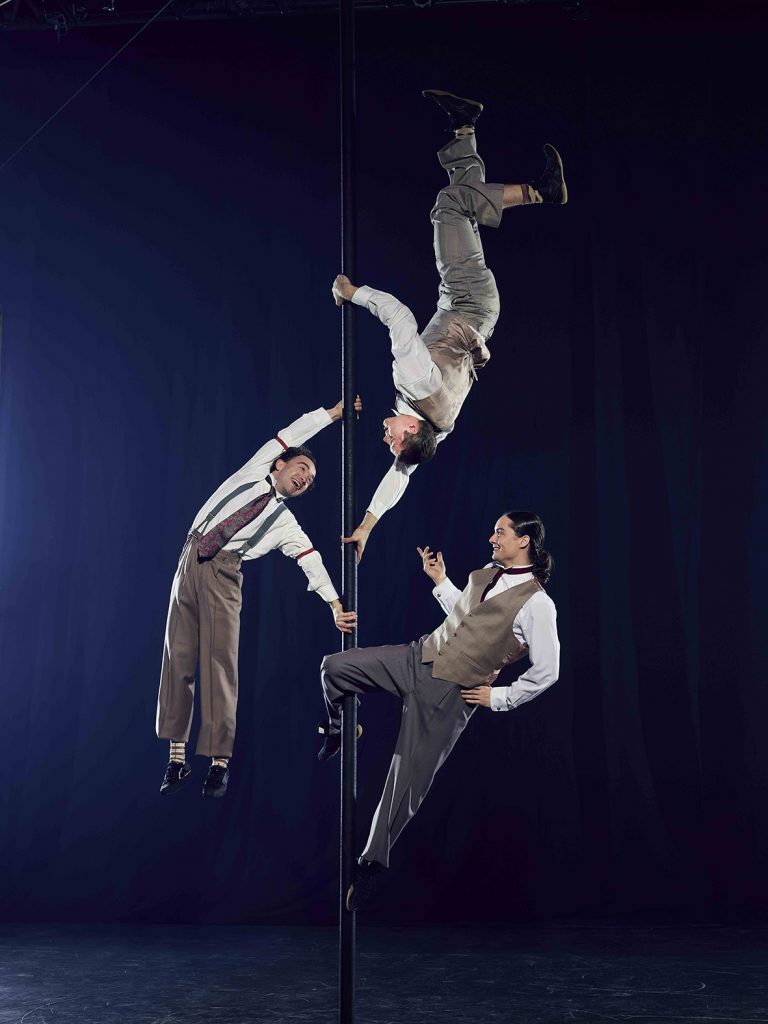 Learning the job of entrepreneur

“Since then, Cirque Éloize has presented more than 5,000 performances in over 550 cities and 50 countries,” the artistic director proudly recounts. “iD, Cirkopolis and Saloon… The company has enthralled more than three million spectators.”

Interviewed at an airport between flights, Painchaud is attentive and responds generously. The old juggler has something fervent and immensely sympathetic in his voice. We feel that the Cirque Éloize experience is as strong for him as it was 25 years ago. His passion is intact. He still directs all the productions of the company while integrating theatre and contemporary dance, always with the aim of pushing back the limits of the current circus.

But Painchaud has also discovered a real passion for entrepreneurship. “For the first 25 years, I apprenticed [show business]as an artist and for the next 25 years, I started learning the entrepreneurial profession,” he says. “I want to consolidate the achievements of Cirque Éloize and those of its community.”

The know-how of the organization includes the art of creating a harmonious living environment. The artist is passionate about new forms of governance: “How does one create happiness at work and shared excitement with others, on all levels?” he asks. “I have discovered a new form of art: the art of making people work together in joy.”

Along with Hôtel, 15 original shows now make up the company’s repertoire, whose corporate component is not to be neglected. Corporate events represent a quarter of the circus’s total activities. More than 1,600 tailor-made events are performed around the world and in a variety of contexts. Cirque Éloize creates concepts and events adapted to the requirements of private or government clients, in the rooms of its head office established in the former Dalhousie Station, a historic building where the National Circus School of Montreal was located from 1989 to 2003 and where the founders of the company studied.

Examples? Cirque Éloize collaborated at the Closing Ceremony of the Turin Olympic Winter Games in 2006. In 2012, the famous watchmaker Jaeger-LeCoultre invited the company for the inauguration of its shop in Place Vendôme in Paris.

During the summer of 2017, the exclusive show L’Heure bleue was one of the highlight of the festivities of the 375th anniversary of Montreal while last winter, Cirque Éloize presented Cirkopolis in Saudi Arabia, allowing women to play in front of a room spectators of both sexes – a first in this country.

So much progress has been made since Cyr invented the Cyr wheel and popularized it by winning the silver medal at the World Circus Festival of Tomorrow in 2003. Having become a discipline in its own right, the Cyr wheel has since been in the majority Cirque Éloize’s creations and its use is now taught in several professional schools.

To carry out all these projects, it is necessary to mobilize all the active forces around unifying values. How to mobilize, how to convince? To this end, Painchaud experiments and tests every cog in his company.

From the logistics of transport to the finesse of interpretation, through the chain of communication, every detail adds up, everything is important!” Cirque Éloize now employs 40 people at its headquarters while three troops are on the road. “On top of the group of permanent works, there can be over two hundred extras, depending on the projects,” Painchaud adds.

Painchaud’s takes great pride in the Cirque Éloize Foundation (2005) and its achievements. The mission is threefold: in addition to contributing to the development of the performing arts, it aims to promote the social reintegration of young people experiencing difficulties and encourages them to pursue specialized or higher studies.

Painchaud talks about the first project that benefited from donations from the foundation, Artcirq, a project by Guillaume Saladin: “Artcirq is an Igloolik-based organization that puts the passion of the circus at the service of Inuit communities to counteract suicide among young people. It mixes music, circus arts and traditional practices and we encouraged it from the beginning. Artcirq has traveled to the Opening Ceremony of the Vancouver Olympic Winter Games and even to the Queen Elizabeth II Golden Jubilee celebrations at Windsor Castle.”

A special mention also goes to the Circus School of the Islands, with its circus training workshops to counter dropping out. Also to Unity Without Violence, which offers circus workshops to young people who are committed to countering bullying and violence in schools.

As Painchaud builds momentum, he wants to talk about everything that is close to his heart: “There is also the Madeli-Aide Foundation, which distributes specialized graduate scholarships to students who continue their studies abroad of the Magdalen Islands.“ 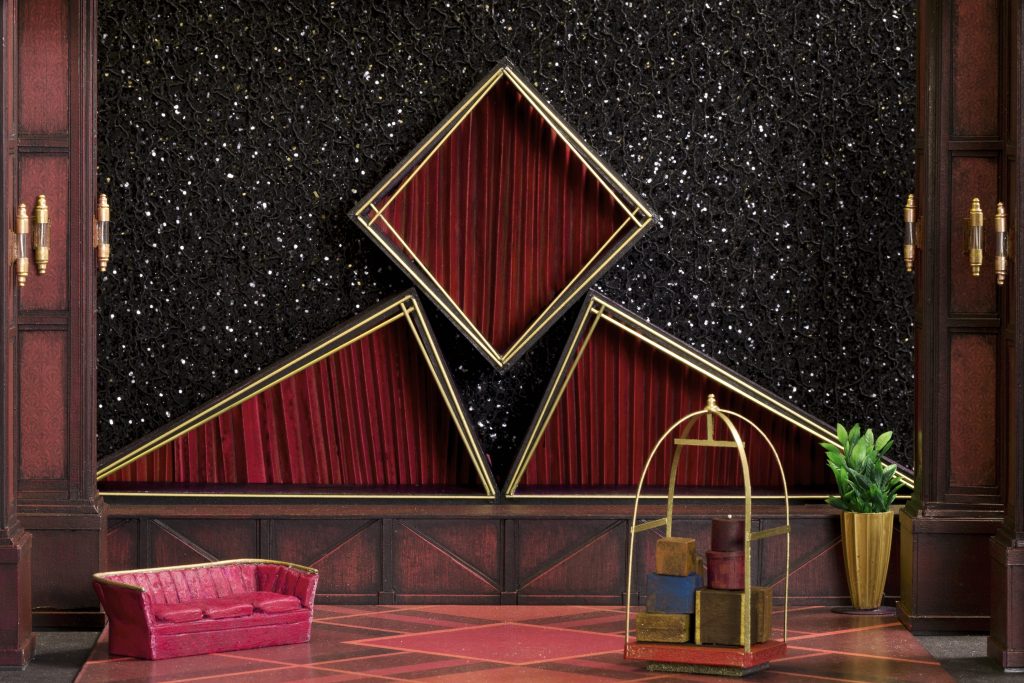 All this makes clear that Painchaud rises to challenges. Where does his inspiration come from? He borrows freely from his environment, takes a notebook with him at all times and takes notes. “I am still in charge of the ideas of the shows, but I am no longer only one,” he clarifies. “We have had a second artistic team for two years.

Why Hôtel? Painchaud has fun with the answer: “We realized that after all these years of tour and all these trips, what we know best are the hotel halls. That’s what inspired us to create our new show.

“A hotel lobby is a perfect pretext for an eclectic and flamboyant show. It’s a place full of stories where perfect strangers meet for a moment. A butler, a businessman, a tourist, a chambermaid: all is allowed and all cultures cross.

This notion of “meeting” is important for Cirque Éloize’s artistic director: “I want to work with people from different cultures and different countries. The exchange of different cultural points of view is a very important asset in an artistic process, just like that of the different living arts.”

A hotel lobby is also a wonderful pretext for misunderstandings, door slamming, in short, for an incredible sitcom: “I watch a lot of movies and this show owes a bit to Wes Anderson’s comedy, The Grand Budapest Hotel. ”

Hôtel is an unlikely haven where existences and eras collide leaving poetic traces. True to the DNA of the company, the multidisciplinary show combines acrobatics, theater, dance and music, all with a good dose of humuor. Painchaud is enthusiastic: “The compositions of the show are notably performed by Sabrina Halde, co-founder of the band Groenland. She has a wonderful voice and she also embodies one of the characters. It’s a show I’m very proud of.“

Hôtel runs from Nov. 14 to 17, 2018, at the Théâtre Maisonneuve of Place des Arts. www.cirque-eloize.com