The famous Broadway musical The Lion King recently made its Montreal debut at Place des Arts. The production is a multimedia entertainment extravaganza fit for a (lion) king based on Disney’s animated coming-of-age parable which follows Prince Simba, a precocious lion cub. 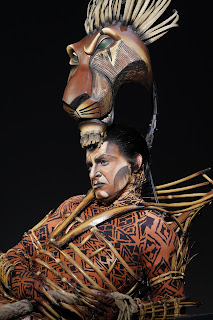 J. Anthony Crane as Scar, the villainous uncle of Simba
who yearns to be king himself.
Photo courtesy of Disney.
A specially rearranged Salle Wilfrid-Pelletier enabled the dramatic entrances of cast members from the back rows and private loges through the audience. Gargantuan animal puppets, costumes, lighting, set design, special effects and onstage surprises were mesmerizing.  There were a few vocal highlights, although the strength—both musically and otherwise—of this production lies in its ensemble pieces. The cutesy comical lines delivered as hyperbolic shticks will mostly amuse adult viewers. As a whole though, this show provides excellent family fare for your entertainment dollar and will delight audiences of (almost) all ages. Spectators on opening night responded to curtain calls with a standing ovation.
Since its debut on the Great White Way in 1997, this play has been seen by 55 million viewers worldwide and garnered six Tony awards. It is the seventh longest-running musical in Broadway history. The Broadway score was composed by Elton John and is augmented by new musical material; the librettist is Tim Rice. Producers are Peter Schneider and Thomas Schumacher. The show is directed by Spider-Man‘s Julie Taymor while Garth Fagan ably tackled choreography. Translated into seven languages, The Lion King has played in 14 countries on five continents. This version includes subtitles in French.
The Lion King runs at Place des Arts until September 4 and includes weekend matinees. Prices range from $46 to $133.50 and tickets can also be purchased from PdA’s box office: (514) 842-2112 / www.laplacedesarts.com. Elevated seating for children should be requested prior to entering Salle Wilfrid Pelletier