You are at:Home»Scena Arts»Theatre»The Fur Flies – and the Fun Follows – at the Centaur 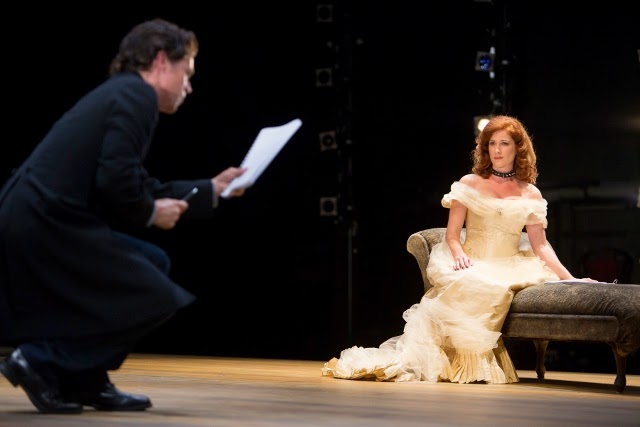 CAPTION: Rick Miller plays Thomas/Severin; Carly Street as Vanda/Wanda
The  critically acclaimed two-hander, Venus in Fur is currently playing at Old Montreal’s Centaur Theatre. Authored by American playwright David Ives, the show premiered in 2010 and debuted on Broadway a year later.  Ives’ work is based on Leopold Ritter von Sacher-Masoch’s similarly entitled 1870 novella, an (in)famous work that actually spawned the neologism “masochism”.  The Tony-nominated Venus in Fur employs that quintessentially dramatic play-within-a-play device.  It is the story of writer/director Thomas Novachek who’s on a quest for talent –and truth.
Novachek has just adapted a new play called Venus in Fur and is auditioning actresses for the role of “Wanda von Dunaiev”, a wealthy young widow.  After a disappointing day of lacklustre auditions, Thomas despairs of finding a suitable candidate and calls his fiancée to complain.  Alone in his studio while a thunderstorm rages, he is taken by surprise when wannabe Wanda, Vanda Jordan, suddenly stomps in.  The tacky, obnoxious ditz spews profanities whilst explaining her tardiness, and an increasingly exasperated Thomas prepares to leave.  Vanda persists nonetheless and convinces him to give her a chance.
The ostensibly vapid Vanda soon beguiles Thomas with her prodigious acting talent and she asks him to read the part opposite hers.  As “Severin Kusiemski” — a Polish aristocrat who craves female domination — Thomas channels his inner submissive and the metatheatrical plot deepens.  V(W)anda has similarly embraced her dominant role as she imparts profound and incontrovertible truths about women. The fun continues as she consistently and irrefutably challenges Thomas’ hypocrisy and preconceived notions of gender roles and power in relationships.  Vigorously defending her gender politic dialectic, she lands blow after intellectual blow by exposing androcentric and misogynist archetypes in both the play and the director’s psyche. As Vanda’s spectacular transformation from crass dilettante to serious thespian unfolds, Thomas is mesmerized.  More compelling however, is her brilliance in dismantling and reversing the underlying power paradigm inherent in audition scenarios –especially ones where male directors, writers or producers are casting women. The show is popularly billed as a sado-masochistic power …er….play, but — crops and (BDSM) props aside — it evokes relationships of all types.
Centaur Theatre’s Canadian Stage Production stars Carly Street and Rick Miller. Earlier this year Street won Dora Mavor Moore and Toronto Theatre Critics awards for best actress. Both deliver outstanding performances.  They are directed by Jennifer Tarver. Runs until November 9th. Ticket prices begin @$27.00; 514-288-3161;
www.centaurtheatre.com