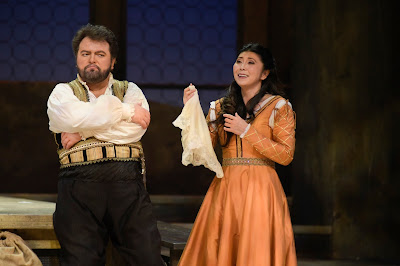 FOR Montreal opera and theatre aficionados, the afterglow of new year’s will radiate through late January to early February with the creative brilliance of Otello.

Conceived when Giuseppe Verdi’s music met William Shakespeare’s pen, the operatic masterpiece had an agonizingly long and arduous gestation.  Although Verdi couldn’t read English, he revered Shakespeare’s work –referring to Macbeth (for instance) as “one of mankind’s greatest creations”.  On The Bard of Avon himself, Verdi wrote: “He is one of my very special poets, and I have had him in my hands from my earliest youth, and I read and reread him continually.”  But by the time he was introduced to the familiar story of Othello (or The Moor of Venice), Verdi had already declared himself retired from composing opera. This was largely due to his erstwhile success with the monumental Aida which had debuted in 1871.  Moreover, with his triumphant 1874 Requiem Mass, the great composer had no interest in resuming his art when music publisher Giulio Ricordi and conductor Franco Faccio first presented Othello to him in 1879.  They persisted nonetheless, annointing Arrigo Boito as collaborating librettist, but still he refused.  The trio, along with Verdi’s (second) wife Giuseppina Strepponi, conspired to coax Verdi out of his self-imposed retreat. For the next few years, Verdi intermittently expressed casual interest but promised nothing, while Boito labored over the libretto.  Five years later, in March 1884, Verdi began composing, but just sporadically.  Long stretches of inactivity were punctuated by incredibly productive bursts of creativity where he would compose with great fervor. This pattern was repeated until December 1886, when an excited Verdi wrote to Boito that his opera was all but completed. The ecstatic Boito responded: “The Moor will come back no more to knock on the door of the Palazzo Doria (Verdi’s Genoa residence), but you will go to meet the Moor at La Scala. Otello exists. The great dream has become reality”. Indeed, Otellodebuted to unprecedented popular and critical acclaim on February 5, 1887, at Milan’s La Scala.
Verdi’s music functions as opera was intended: a heightened form of drama perfectly faithful to the spirit and letter of the play. Out of some 300 operas adapted from Shakespearean plays, only a pitiful 2% have seen the light of stage. The reason is self-evident: adaptations are notoriously challenging, and those difficulties are directly proportional to the original’s quality. Hence, as further testament to the magnitude of his genius, Verdi counts three operas based on the Bard’s plays: Macbeth (1847), Otello (1887) and Falstaff(1893), adapted from The Merry Wives of Windsor.
This brand new co-production is presented as a partnership between British Columbia’s Pacific Opera Victoria and l’Opéra de Montréal. It marks the end of a 16-year local drought of the iconic oeuvre. As Otello, tenor Kristian Benedikt must summon considerable vocal chops whilst executing a panoply of emotions that begin on an intense plane and devolve into insane jealousy. Soprano Hiromi Omura interprets innocent victim Desdemona, Otello’s faithfully devoted wife and baritone Aris Argiris must personify evil as he sings the role of satanic Iago. Glynis Leyshon stages this new production and Keri-Lynn Wilson conducts the Orchestre symphonique de Montréal.
Otello performances take place on January 30, February 2, 4, and 6 @ 7:30 pm in Salle Wilfrid-Pelletier.  For tickets/info call 514-842-2112 or visit www.placedesarts.com; www.operademontreal.com.