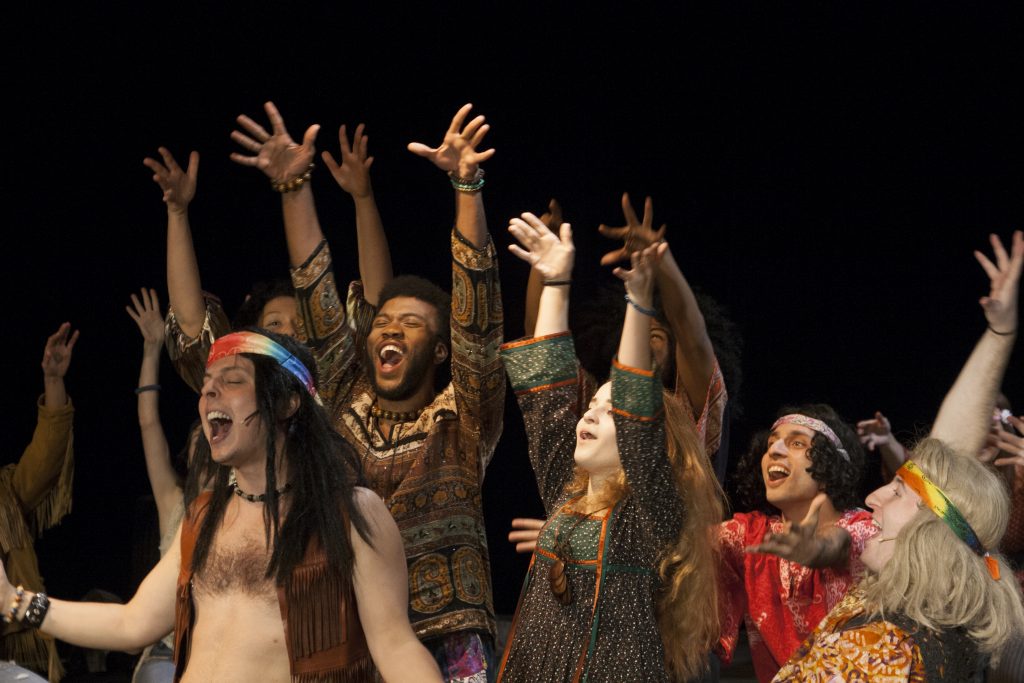 In the Wings Promotions reprises their hugely successful ‘mane’ event this fall, at Montreal’s MainLine Theatre. Hair: The American Tribal Love-Rock Musical turns 50 this year, yet the hippest Broadway smash still resonates. The iconic show that spawned an entire genre of rock musicals, Hair revisits the 1960s USA, the ubiquitous hippie movement, peace protests, anti-capitalism, Vietnam War’s conscientious objectors and America’s sexual revolution. Hair’s composer is Montreal-born Galt MacDermot; he attended Upper Canada College and Bishop’s University. Book and lyrics are by James Rado and Gerome Ragni. Happily, the grooviest play produced mega-hit songs and mega-buck$ for its anti-capitalist producers. One of the most successful scores ever and the most performed score in Broadway history, Hair featured four times as many songs per act than most Broadway musicals of the era. Throngs of young baby boomers rocked out to its coolest tunes: Aquarius/Let the Sunshine In, Good Morning Starshine, Easy to Be Hard and rock ‘n roll’s most triumphal tribute to human tresses: Hair. Directed and choreographed by Nadia Verrucci with musical direction by Ian Baird. Until September 9th. www.mainlinetheatre.ca

Montreal’s Centaur Theatre debuts its 49th season with an acclaimed autobiography, Playing with Fire: The Theo Fleury Story. A celebrated Calgary Flame captain, Stanley Cup and Olympic gold medalist, the NHL All-Star was renowned for his legendary hockey talent, relentless determination and infamous ornery, enforcer persona. The quintessentially scrappy yet diminutive right winger, Fleury inspired fear in his NHL opponents — despite being one of the smallest players in hockey! After flaming out, having frittered away much of his $50 million fortune, Fleury was forced to exit hockey, ostensibly due to alcohol and drug addiction, and finally face his inner demons. Through therapy, it emerged that Theoren Fleury had suffered childhood sexual abuse at the hands of his former coach, convicted sex offender Graham James. The play was penned by Kirstie McLellan Day, who also co-wrote the best-selling book with Fleury. An emotionally wrenching story, Playing with Fire is ultimately a poignant testament to one man’s resilience and triumph in the face of trauma and horror. Produced by Edmonton’s Persephone Productions, Fire has played to unprecedented, near-unanimous critical acclaim across Canada. Ron Jenkins directs Shaun Smyth, in this one-man tour de force. October 3rd to 29th. www.centaurtheatre.com

The Phantom of the Opera

One of the world’s best-loved mega-shows is returning to Montreal. In October Andrew Lloyd Webber’s The Phantom of the Opera comes back to Place des Arts after an absence of 25 years. (The show continues on Broadway after 29 years and counting). Based on Gaston Leroux’s gothic novel, Le Fantôme de L’Opéra, Phantom is the chilling tale of a ghost trolling the bowels of Paris opera house Le Palais Garnier and terrorizing its inhabitants. After falling in love with Christine, a beautiful young soprano, fantôme deviously schemes and plots to make her a star. Librettists are Charles Hart and Richard Stilgoe. Cameron Mackintosh’s all–new production features revamped staging, decor and sets. Directed by Laurence Connor, Phantom is performed by a cast and orchestra of 52, making it one of the largest touring shows in North America. Evenko and Broadway Across Canada bring it to Salle Wilfrid-Pelletier. October 4-15. www.placedesarts.com

Black Theatre Workshop presents The Mountaintop, a play about the inner doubts and triumphs of Martin Luther King Jr. during his final hours. Katori Hall is its award-winning American playwright. It is April 3, 1968 — the day before his assassination — and King has just given his “I have been to the mountaintop” speech. He is exhausted and returns to his lodgings at the Lorraine Motel in Memphis, Tennessee (now the US’s National Civil Rights Museum). Suddenly a stranger knocks on King’s door and — in a dialogue that moves swiftly between the personal and the spiritual — he is compelled to examine his own life and legacy. The work debuted in 2009 in a tiny theatre in London after failing to obtain an American staging. It was an immediate success and moved to the West End, winning the Best New Play Award. A Broadway production opened two years later. Well-known Montrealers take the two roles in the BTW production: Tristan D. Lalla plays King while Letitia Brookes co-stars as Camae. Toronto’s ahdri zhina mandiela directs ; co-production with Halifax’s Neptune Theatre. October 14-29. www.blacktheatreworkshop.ca

The most famous romantic tragedy in the history of theatre is undoubtedly William Shakespeare’s Romeo and Juliet. Written between 1591 and 1595, the play was originally published in quarto form in 1597. Dawson College’s professional theatre program tackles the ambitious oeuvre this autumn. Two violently feuding families in Verona, Italy, have literally been killing each other for years, but their teenaged progeny happen to meet and are mutually smitten. In fact, son Romeo Capulet and daughter Juliet Montague fall so deeply in love that they are soon wed by Friar Laurence. Believing that their nuptials can serve as a peace-making catalyst between the warring factions, the friar tries to act as wise counsel to the archetypal lovers and spurs major plot developments. However, he soon foretells their catastrophic doom in his famous rhyming plant soliloquy. Jude Beny directs at Dawson’s Dome Theatre. November 13-23. www.dawsoncollege.qc.ca/professional-theatre

Centaur Theatre’s post-Halloween thriller is Patrick Barlow’s The 39 Steps. Based on John Buchan’s 1915 adventure novel — which later morphed into Hitchcock’s spy film — the stage version takes a deadpan turn. Dapper Canadian bachelor Richard Hannay is out enjoying a London stage play, when a shot is suddenly fired in the theatre. Enter mysterious, elegant woman in black: one Annabella Schmidt, who convinces the hapless hero to let her hide in his rented flat. Schmidt is then murdered and ‘dashing’ Dick is desperate to clear his name. Silliness and absurdity abound in this deliciously wacky spoof that invokes the best of British comedy. This 2007 Olivier Award winner for Best Comedy delivers the goods, gags and guffaws. Centaur’s new artistic director Eda Holmes guides the cast of four. Nov. 14-Dec. 10. www.centaurtheatre.com