Empire of the Son Rises in Montreal

The Centaur Theatre’s Wildside Festival celebrates its 20th anniversary this January with Tetsuro Shigematsu’s poignant autobiography, Empire of the Son. This one-man tour-de-force has been a runaway smash hit since its premiere. The former CBC announcer cum playwright with a mission is desperate to forge a relationship with his ailing father Akira. Growing up in a Japanese-Canadian household, the two were emotionally distant, rarely spoke and never hugged. Conversations were nonexistent; absurdly ironic, given that both had worked as radio broadcasters. Tetsuro stages a series of at-home interviews with Akira and the bonding begins in earnest. Empire of the Son made Canadian theatrical history last year by completely selling out its world premiere prior to the preview run. A Vancouver Asian-Canadian Theatre Production; directed by Richard Wolfe. January 5–15, www.centaurtheatre.com 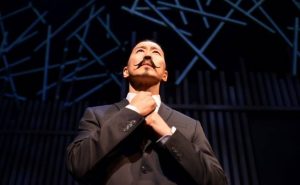 Stephen Sachs’s comedic two-hander, Bakersfield Mist is a delightful piece that explores artistic – and personal – authenticity. In particular, it examines the elusive craft of appraising fine art. And as a subset of that mysterious process, it questions the whys and wherefores of paintings that are deemed “great” or “priceless”. Inspired by actual events, the play concerns Maude Gutman, a crass, 50-ish beer-swilling ex-bartender from Bakersfield, who believes that her $3 thrift shop find is really a Jackson Pollock treasure. In an Antiques Roadshow-esque twist, pompous art connoisseur Lionel Percy visits Gutman’s tacky, trashy trailer habitat to probe her claim. As they interact, viewers face a jarring juxtaposition of the potty-mouthed, chain-smoking philistine and the world-renowned art scholar who has only contempt for Gutman. A veritable unleashing of class warfare ensues as Percy reels from culture shock and the characters deconstruct.  Great fun and high art – or, is it? Centaur’s Roy Surette directs Nicola Cavendish & Jonathan Monro. January 31–February 26 at the Centaur, www.centaurtheatre.com

A Theatrical Memorandum on Anna Politkovskaya

Imago Theatre resurrects the final year of Anna Politkovskaya’s life with Intractable Woman by Stefano Massini. Born in New York to Soviet-Ukrainian UN diplomats, Politkovskaya was a celebrated, award-winning Russian journalist and author. She reported for various Soviet newspapers in the 1980s and 90s, documenting perestroika and the aftermath of the USSR’s collapse. In 1999 she joined the anti-establishment Novaya Gazeta, which specialized in investigative pieces, and was the only journalist to cover the Second (1999-2009) Chechen War.  Highly critical of Russian officials, she was formally denounced as “not able to be re-educated” by the State. Politkovskaya was repeatedly targeted and finally assassinated near her home in Moscow, on October 7, 2006. She was a 48-year-old mother. Translated from the Italian Una Donna Non Rieducabile by Paula Wing. Micheline Chevrier directs. February 9–19 at the Centaur. www.imagotheatre.ca

Take a Chance on Mamma Mia

Montreal ABBA fans will get their final chance to say “thanks for the music” when Mamma Mia plays Salle Wilfrid-Pelletier as part of its farewell tour. The infamous jukebox musical, penned by British playwright Catherine Johnson, features the catchy tunes of former ABBA bandmates Benny Andersson and Björn Ulvaeus. As 20-year-old Sophie begins planning her Greek island wedding, she feels incomplete. Her wish is to be given away by her father, whom she has never known. After perusing the contents of her mother Donna’s diary, she identifies three possible dads. With nary a word to her mom, Sophie sends them invitations and signs off as Donna. All three respond, fly to Greece and reunite with Donna – and the bride-to-be. Chart-topping hits include “Thank You for the Music,” “Take a Chance on Me,” “The Winner Takes It All” and lots more of that can’t-get-it-out-my-head genre. The show’s facts ‘n stats are staggering: $2 billion grossed from a global audience of 60 million over 17 years. Directed by Phyllida Lloyd with choreography by Anthony van Laast. An uplifting, sunny tale that will surely brighten your winter doldrums. Five performances, February 17–19. www.placedesarts.com; www.evenko.ca; 514-842-2112.