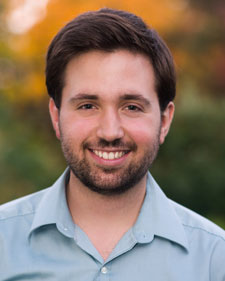 On November 22, 2014, baritone Hugo Laporte received the highest honours at the prestigious OSM Standard Life Competition. Since then, his engagements have multiplied to ever-increasing critical acclaim. In this article, we encounter a young musician of exceptional promise.

Originally from Quebec, Hugo Laporte was introduced to music at an early age. At four years old, he and his parents attended the youth concert series at the Orchestre symphonique de Québec. “They quickly noticed that I had a strong interest in music. So we went to the open house of the music school around the corner. I was six years old.” Young Hugo was smitten with the sound of the violin. “I immediately adored the sonority. Besides, who doesn’t love the violin?”

Nevertheless in his teenage years, like many others, Hugo remembers losing his enthusiasm for violin practice. But, he specified, “not for music.” Hugo tried to counter this malaise by taking up the trumpet, but the verdict was the same: music was at the centre of his life, but his connection to these instruments wasn’t strong enough to constitute a true vocation.

Hugo Laporte turned to singing thanks to the suggestion of professor Dominique Dufour who taught him solfège, and, a few years later, piano. She had noticed that he sang in tune and had a beautiful vocal timbre. “Someone had to tell me. I probably owe her my career.” You could say that from that moment on, Hugo was truly one with his instrument.

After focusing on singing at Cégep, Hugo privileged musicology studies while at the University of Laval. “At that time in my life, I didn’t see myself being a singer, I didn’t think it was possible.” Those two years of study in musicology are very useful to him today: “I learned invaluable research skills. Being a musician also involves a lot of work in the library: translation of texts, reading about the compositions, the composers, etc.” Over the course of his musicology degree, Hugo Laporte realized that singing was his true love. “I did it everyday and I was a member of several ensembles at the university.” He devoted himself completely to vocal studies in January 2014 under the tutelage of Patricia Fournier with whom he is presently completing his Masters degree.

At 24 years old, Hugo recognizes that his triumph at this prestigious national performance competition gives him a huge leg up; but the clear-headed musician was at pains to point out that nothing is a substitute for hard work and professional experience. “Yes, the competition gives an artist greater exposure and some engagements, but that’s not a reason to accept everything. And depending on how a contract goes, you can easily fall from grace.”

The future seems promising for this artist who is already distinguishing himself on the lyric scene. “My dream is to make the most beautiful music with the best musicians, and to do that all over the world.”