Officially inaugerated December 7 at the Place des Festivals, this luminous, musical, and interactive installation of thirteen outdoor zoetropes will charm young and old at Luminothérapie this winter! At the crossroads of cinema and retro-futuristic machines, these impressive wheels bring light and movement to loops of 24 images recounting different fairytale stories. Once, twice, or a thousand times upon a time, Little Red Ridinghood gets swallowed by the wolf, the Three Little Pigs lose their houses, and Alice spirals off into Wonderland! Activated by the audience, who is seated on one side or around, each zoetrope incarnates its own story accompanied by original music and echoed in larger-than-life projections on the surrounding buildings. Created by composer Olivier Girouard, artistic director of Ekumen, and visual artist Jonathan Villeneuve, in collaboration with ottoblix for visual research and the expertise of Générique Design, LOOP is the winner of the seventh edition of Luminothérapie’s competition for its Quartier des Spectacles installation. This whimsical installation will be in place until January 29. ekumen.com, quartierdesspectacles.com

The Four Seasons of La Chapelle

For its first draft in four seasons, the Théâtre La Chapelle ventures in exciting directions, presenting both the latest work by composer and performer Martin Messier, creating the choreography of the inanimate with Corps mort (January 23 to 27), and the interdisciplinary choreographic performance Idiot by Helen Simard (February 27 to March 3), who is a passionate researcher of urban and contemporary dance. Also worth mentioning is the early retrospective of Daniel Léveillé with the reprise of Amour, acide et noix (from 2001, December 12–13) and La pudeur des icebergs (the modesty of icebergs) (from 2004, December 15–16). www.lachapelle.org

The Cycles of the MAI

Montreal — arts interculturelles pursues its mandate of plurality with two especially interesting cycles. The first, titles Welcome to Indian Country, is a series of works put together by Oji-Cree choreographer and performer Lara Kramer, the curator of this event, organized as part of Canada’s 150th and Montreal’s 375th anniversary. Mixing traditional and contemporary styles, this salute to the indigenous artists of Montreal demonstrates the diversity of indigenous traditions, their colours and folklore, as a multitude of harmonious and discordant voices of a community in transformation. Eclectik, an annual event at the MAI, gives the floor to First Nations January 20 and 21. Then, over two weekends from March 16 to 25, a second series takes the stage, this time with performance art by local and international artists. Taking Place looks at eight significant performance artists from Seoul to San Francisco: Chun Hua Catherine Dong, Julie Vulcan, Keyon Gaskin, Francisco-Fernando Granados, Hee Ran Lee, Francis Marion Moseley Wilson, Martin O’Brien and La Pocha Nostra. m-a-i.qc.ca

Reprises and Surprises at Usine C

At Usine C, reprises are the theme of the season, with United Tales, a duo by Clara Furey and Peter Jasko that premiered at La Chapelle last season (January 31–February 2), followed by Mercurial George, the latest performance from Dana Michel (February 28–March 3), and Louise Lecavalier’s Mille batailles in a duo performance with Robert Abubo (March 8–10), two pieces that premiered at the 2016 FTA. Any surprises will hopefully come from Alessandro Sciarroni, already a big name in Europe, who makes his Quebec debut with Folk-s / Will you still love me tomorrow? February 21–23. Keep an eye on this one! www.usine-c.com 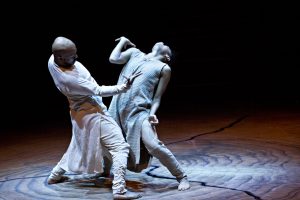 Until the Lions, Photo: Jean-Louis Fernandez

Dancing and Playing at the Circus

TOHU, known for its creativity and innovation, invites artist collectives onto its stage this season. Get your fill of The 7 Fingers’ Reversible throughout December, because soon to follow is Until the Lions by the Akram Khan Company (sure to be an event, March 17–25) and Tendre, for young audiences, by Estelle Clareton (March 31–April 1). Théâtre Bouches Décousues will take over the stage with Le merveilleux voyage de Réal de Montréal (April 2–3), and Improduits’ show Improcirque for their annual tournament, April 21-22. tohu.ca