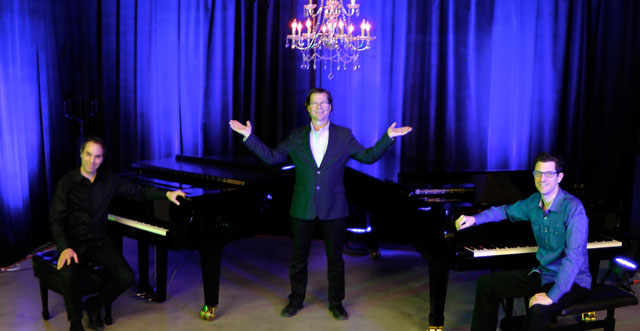 The Piano Caméléons project first came together in 2013. Its instigator, Oliver Esmonde-White (see sidebar) recalls, “I invited five pianists to play in duo combinations over five nights at the House of Jazz on Aylmer Street: Oliver Jones, Lorraine Desmarais, Marianne Trudel, John Roney, and Matt Herskowitz. I’ve known Matt for about 20 years, shortly after he arrived in town. He came one evening to my old studio for a musical evening I’d put together. I was taken by him as a virtuoso classical pianist, but he could also make it up on the spot like a jazzman. I had heard of John Roney before seeing him. I hired him once when he was still a student, but really started to appreciate him after a concert where I had supplied the piano, an instrument he ended up purchasing for himself. But it was that five night event that lead to my decision to pair him and Matt.”

Several shows later, including the closing performance at the previous Montreal Jazz Fest, the Piano Caméléons duo was signed on to the Justin Time label last October, the signature coinciding with the opening of a new performance space: the Espace Oliver Jones. Located in the industrial sector of the Mile End district, the room is tucked away in one of the area’s office buildings. Finding it is not easy, because there is no sign at the entrance. The room is not a concert hall as such with rows of seats on ground level and a stage raised above them. At best, it accommodates about forty people on card table-type chairs spread over two or three rows. Far from being a hole in the wall, it’s quite large. Most of it is taken up by some sizeable pieces of furniture, 15 or more, the smaller items lined up along a wall, the remainder measuring two meters and more, all packed closely to one another, four of which can be squeezed into the front stage area.

As Mr. Esmonde-White explains, he envisages it more like a multi-purpose room for rehearsal and intimate concert purposes. Also worth noting is a recording booth at the back, where performances can be also filmed and eventually uploaded online.

With such amenities at hand, this space is an ideal laboratory for the duo, and it may well be used for the recording itself – though its date not set at this writing, the release is to take place before year’s end. From a purely musical standpoint, these two gentlemen have decided to tackle on one of the most tricky tasks: to jazz the classics. Their repertoire consists of staples by Bach, Chopin, Gershwin and Debussy, and, in the offing, a co-composed original. Just recently, they headed to New York to play several showcases at the APAP, a leading stateside organization of agents and concert presenters.

Each a strong personality in his own right, these partners have found the experience a most gratifying one, in artistic and inter-personal terms alike. When asked what one brings to the other in this project, Roney states: “Matt is the perfect partner in this project. I haven’t met anyone else who shares such a vast knowledge of the piano: harmony, history, styles, repertoire. This makes it easy to communicate musically, and work together in an efficient and creative way. As for myself, my ‘classical’ technique has improved significantly. I think more about sound and projection than I ever did before.”

For his part, Herskowitz enthuses: “Working on this project with John has been an incredible experience. He brings a rich palette of harmony, a beautiful, compelling melodic style and great chops to the table, along with a killer sense of groove. I’ve done a lot of arranging of classical music, but have never collaborated with anyone before. Working on these arrangements with him has absolutely expanded my repertoire of ideas and possibilities. I believe we can take from each other and be inspired, which is both lots of fun and very motivating. We also come up with better material than either of us would individually, a great reason for us to continue!”