For its 17th edition the Off Festival de Jazz de Montréal (OFJM) dishes out what may well be its most ambitious program to date. All told, 24 shows of all stylistic stripes, from mainstream to avant-garde, will be staged in three concert halls (Lion d’or, Sala Rossa and the Gesù theatre) and as many clubs (Upstairs, Le Dièse onze and Résonance Café).

The all-musician programming committee, presided by harmonica player Lévis Bourbonnais, is true to spirit in showcasing home-grown talent. Yet, it takes an important step forward by opening itself to more joint ventures between locals and guest musicians. Both the opening and closing concerts are exemplary in this regard. These two shows will rally 30 musicians, the bulk from our scene, but with two visitors from Sweden for the first, an important Toronto contingent for the second as well as one American headliner.

On Thursday 6 at the Lion d’or, saxophonist Christine Jensen kicks off the festival with Transatlantic Conversations. Premiered in Sweden in 2013, this project for an eleven piece band came into being with the help of pianist Maggi Olin, the group’s co-director. A live performance, recorded by the Swedish national broadcaster in her city of Malmö, was released a year ago on a local label. Both Jensen and Olin have known each other for some time and have toured in small groups, once in Canada. Their musical friendship has now borne its fruits in this large project. Harmonically rich and lyrical, the eight pieces (four penned by each) enable the participants to make the best of their solo spots. Incidentally, this concert will offer some new material. Included in the line-up are vocalist Sofie Norling, a compatriot of the pianist, and Christine’s trumpet playing sister Ingrid, both of whom will add some live electronics into the mix.

On Saturday 15, the festival ends with a bang, and a musically ambitious one at that. A 20-piece orchestra plus a conductor will premiere at the Gesù a program of music devised by saxophonist and composer Roscoe Mitchell. A founding father of the AACM in the 1960s, Chicago’s now famous collective of Black musicians, and charter member of its flagship group, the now legendary Art Ensemble of Chicago, Mitchell remains at the forefront of today’s creative music scene. At 76 he continues to challenge the boundaries of conventional jazz practices. On the heels of this performance at the Off Festival, the orchestra will also play in Toronto, thanks to a co-production agreement with the Music Gallery. Due credit for this ambitious undertaking should go out to its three main instigators: Montrealers Nicolas Caloia and Scott Thompson, and saxophonist Kyle Brenders from Toronto.

During a recent phone conversation, Mr. Mitchell explained the somewhat unusual concept of this project. “Three years ago, I recorded two albums of freely improvised pieces with Craig Taborn on keyboards and Kikanju Baku on drums. (Conversations I & 2). I asked people to transcribe some of the pieces which I then orchestrated into compositions. I now have two versions, written for chamber ensembles in Rekjavik and New York. I will present yet another one here, this time with open sections for improvising. By doing it this way, I arrive at things I simply would never have thought of had I composed from scratch.”

Yves Charuest: Have Horn Will Improvise 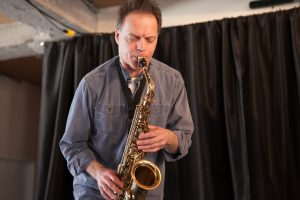 Alto saxophonist Yves Charuest seems to be on a roll these days. It all started a year ago when he pocketed the François-Marcaurelle prize, attributed by the Off Festival to an individual or group for a performance at its event. This award, which includes a stipend, give the winner the opportunity to return to the next edition. And return he will, for he is slated to appear as a sideman in two shows, the festival closer and, a week earlier (Oct. 8), with reedist Phillip Lauzier’s quartet Chaosmos. As a leader, the altoist will perform the next day with his winning group Still (Nicolas Caloia, bass, Peter Valsamis, drums) and a special guest, German pianist Georg Graewe. For Charuest, this meeting fulfills a personal wish.

“The are two pianists I have wanted to play with: Augusti Fernandez and Georg Graewe. In 2014, the former, a Catalan, came to New York, so I managed to bring him to Montreal to play with my trio at the Suoni per il Popolo festival. We did a studio recording the next day, and an album is due out in the months to come on the Tour de Bras label from Rimouski. For Graewe (pronounced grey-va), an acquaintance of mine visited him at his home in Vienna last year, so he got us in touch. I also have a recording date set up with him on the following day.”

Since his emergence in the 1980s, Charuest’s musical bread and butter has been freely improvised music. Interested by the drums in his youth, he first started on flute in school before laying his hands on a saxophone. Studies followed at the Montreal Conservatory after which he attended the Banff School of Music. From there, he got involved in the burgeoning improvised music scene in town, developing a close partnership with drummer Michel Ratté. In 1986, he moved to Europe for two years, dividing his time between France and Germany.

Charuest’s Off festival appearances are but the first positive developments. In November, he travels to Vancouver for a three-week residency, his sojourn supported by a privately-funded intercity artist exchange program. Starting in the summer of 2017, he’s off to London for a sixth month stay in an apartment run by the Quebec government.

From a musical perspective, Charuest is not one to indulge in displays of virtuosity so prevalent among saxophonists. “I’m not so much interested in music stacked up in layers, like in free jazz, but in finding ways of getting the parts to fit together like a puzzle. So it’s not a matter of how I play on top of others but more of inserting myself into the spaces that occur in the music.” 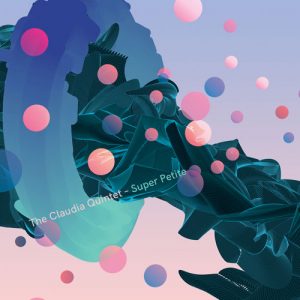 Now established in town as a full time professor at McGill University, drummer John Hollenbeck has earned a reputation as a composer of ambitious works, many for large orchestras. An other outlet for his creativity is the Claudia Quintet, a quintet of distinctive instrumentation built around a vibraphone (Matt Moran) and a accordion (Red Wieringa). With stalwart bassist Drew Gress and the excellent tenor sax and clarinetist Chris Speed in tow, this group now its 20th year issued its seventh release for the Cuneiform label earlier this year. In the liner notes, the leader explains the album’s title by his intention to write more concise pieces for this album that clocks in around the 40-minute mark. While the cuts are brief, ten in total, there is still enough room in them to let his sidemen shine as soloists. But the main asset of this record are the very subtle effects of timbre and texture that Hollenbeck achieves in his writing. 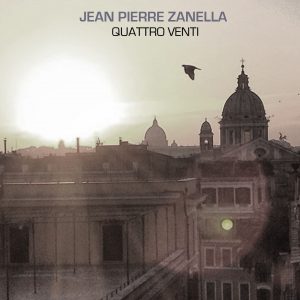 Saxophonist Jean-Pierre Zanella is a mainstay of the Montreal jazz scene, a player who is second to none on soprano and alto sax. In his newest album, clearly one of the best in his career, he offers a complete program of original music, his own for the most part, but some by his sidemen. Zanella has drawn much inspiration from a stay in Rome in 2014 to write his material (the title track for example), the results of which are a fine contemporary mainstream jazz outing. Apart from the final number, a trio of, sax, voice (his daughter) and piano (New-Yorker Aaron Parks), the remaining nine cuts are all performed by quartets of varying instrumentation with two different pairings of drummers and bassists, Parks making a second appearance, guitarist Tony Moreno on three others, all others with Pierre François on keyboards. Zanella, for his part, overdubs himself on three cuts, adding bits of flute, clarinet and tenor sax in themes. Also of note are the improvised solos, full of swagger and deft gestures by all concerned, Zanella leading the charge.

Other new recordings to watch for during the festival