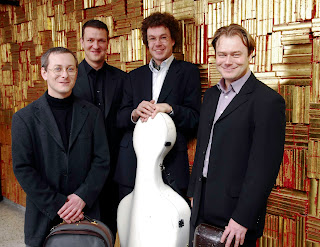 The Leipzig String Quartet began its “Romantic Heroes” concert at the Toronto Summer Music Festival in Koerner Hall on July 28 with Mendelssohn’s Quartet No. 6 in F minor, Op. 80 and Beethoven’s Quartet in F major, Op. 135—the last quartets the composers wrote.
Stefan Arzbuger (first violin), Tilman Buning (second violin), Ivo Bauer (viola) and Matthias Moosdorf (cello) delivered decent performances of both quartets. The Mendelssohn was passionate, to say the least. It had all the right ingredients to be a solemn performance befitting thepiece that the composer created in mourning for his sister Fanny’s death.
One of Arzbuger’s strings broke right near the very end, but despite having to pause abruptly for a few minutes, the quartet picked up the music where it left off and the effect was less breathless but sizzling nevertheless.
The Beethoven was welcomingly sunny and happy in comparison. It was played with supremely confident skills and subtle but dramatic nuances highlighted the piece throughout.
After intermission, Buning, Bauer and Moosdort returned to the stage with pianist Menahem Pressler for a solid performance of Schumann’s Piano Quartet in E-flat major, Op. 47.
Pressler still has his chops at 87 years of age. A true chamber musician, he achieved the brisk give and take of the music with the players and was as energetic as ever, without attracting the most attention. In fact, the strings slightly overpowered the pianist at times, but overall it was a sharp reading that saw all players taking risks along the way.
Everyone returned to stage for an encore of the second movement of Brahms’ Piano Quintet in F minor, Op. 34—a sweet lullaby bestowed with delectable sweet dreams.
www.tsmaf.ca