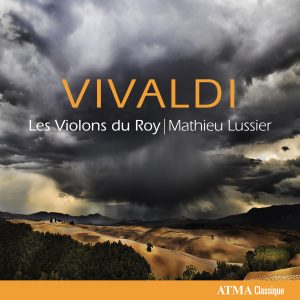 In his second recording with Les Violons du Roy, associate conductor Mathieu Lussier shows maturity and restraint, without losing the vitality of Antonio Vivaldi’s concerti. Most associated with the Four Seasons and his pedagogical violin concerti L’estro Armonico, this release broadens the casual listener’s idea of the Red Priest’s output. With these selections, Lussier, a bassoonist himself, places an extra emphasis on concerti that feature winds, including the Concerto in G minor RV 577 for one violin, two recorders, two oboes, bassoon with its haunting extended oboe and bassoon solo in the second movement, and both Concerti in F, RV 569 and 574, and the Concerto in C for 2 trumpets, RV 537.

Opening the CD, the Concerto in F for violin, 2 oboes, bassoon, 2 horns strings, and continuo, RV 569 captures the characteristic grandeur of what later came to be known as the “Dresden sound,” a robust and full ensemble sound with a greater use of winds. Les Violons du Roy tread a fine balance of solo, soli, and ensemble playing, maintaining a Baroque vibrancy which does not become cumbersome on modern instruments. Coming full-circle with the Sinfonia from La verità in cimento (Truth in Contention), an all-string concerto written as a prelude to the opera, the ensemble deftly reveals Vivaldi’s genius for the compact.