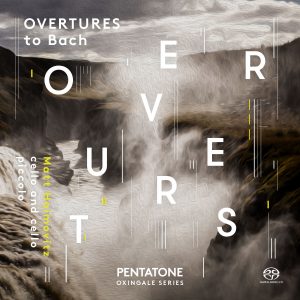 Recently named Pentatone’s Artist of the Season, Matt Haimovitz has never shied from making waves in performance or recording. The Montreal-based cellist has already proven his Bach chops over and over throughout his career, most recently with the 2015 Pentatone release of the Suites based on a copy by Bach’s second wife Anna Magdalena played on period instruments.

This new disc explores six new commissions by Haimovitz, each an Overture to the Prelude from each Suite. The structure of Overture followed by Prelude makes the Bach a comment on the future, a kind of sonic time machine. Opening with Phillip Glass’s stark minor-key Overture, a dark extension of the ubiquitous Prelude from the Suite in G Major. Du Yun’s The Veronica is an ethereal deconstruction of Bach’s Sarabande, with evocations of the Kontakion, an Orthodox hymn to the dead, Serbian chant, and the gypsy fiddle tradition from central Europe. This is followed by the virtuosic and bold Run by Vijay Iyer, a piece that certainly outpaces Bach’s Prelude to his Third Suite. La memoria by Roberto Sierra draws motives from the entire Fourth Suite while adding a touch of Carribbean bass and salsa rhythms. As Haimovitz writes, “the division between memory and the present is completely blurred.”

The dramatic peak of the disc is David Sanford’s Es War, with a blistering Mingus-inspired pizzicato opening that summons Bach’s top two calling cards: the fugue and the cantata. Closing out with Lili’uokalani, composed by Haimovitz’s wife Luna Pearl Woolf, Haimovitz returns to the cello piccolo. Named after the last queen of Hawaii (and the subject of Woolf’s first opera, Better Gods), the piece evokes pre-Western Hawaiian chant with an inimitable atmosphere.

Next to the orderly Bach, each of the six commissions feel diffuse and difficult in the kinds of ways specific to compositions from the last few decades. Perhaps they do not the same effervescence as the old master – but in Haimovitz’s hands, they are radiant nonetheless.