Last night’s world premiere of Kristin Norderval’s The Trials of Patricia Isasa at the Monument-National was a resounding success, to say the least. The opera, libretto by Naomi Wallace and dramaturg Bibbi Moslet, is based on the true story of Patricia Isasa, who was only 16 when she was abducted in her hometown of Santa Fe, Argentina by the military Junta without trial. Daringly cerebral, The Trials of Patricia Isasa depicts not the events of her imprisonment itself but Isasa’s reckoning with the past decades later as she tries to find justice for herself as well as the 30,000 other “disappeared.”

Presented as part of the Opera America conference, Chants Libres’ The Trials of Patricia Isasa certainly falls under the conference’s theme “Global Strategies, Local Actions.” Insofar as the story is localized in one woman’s experience of Argentina’s “Dirty War,” the theme of delayed justice in instances of large-scale state failures continues to be globally relevant in the 21st century.

Artistic Director Pauline Vaillancourt states that she took on this project to honour Isasa’s courage, a woman “who, thirty years after the fact, accepted to break down the protective barriers she had erected to forget her past, to systemically unearth the monsters of her youth, essentially buried in her work as an architect.” 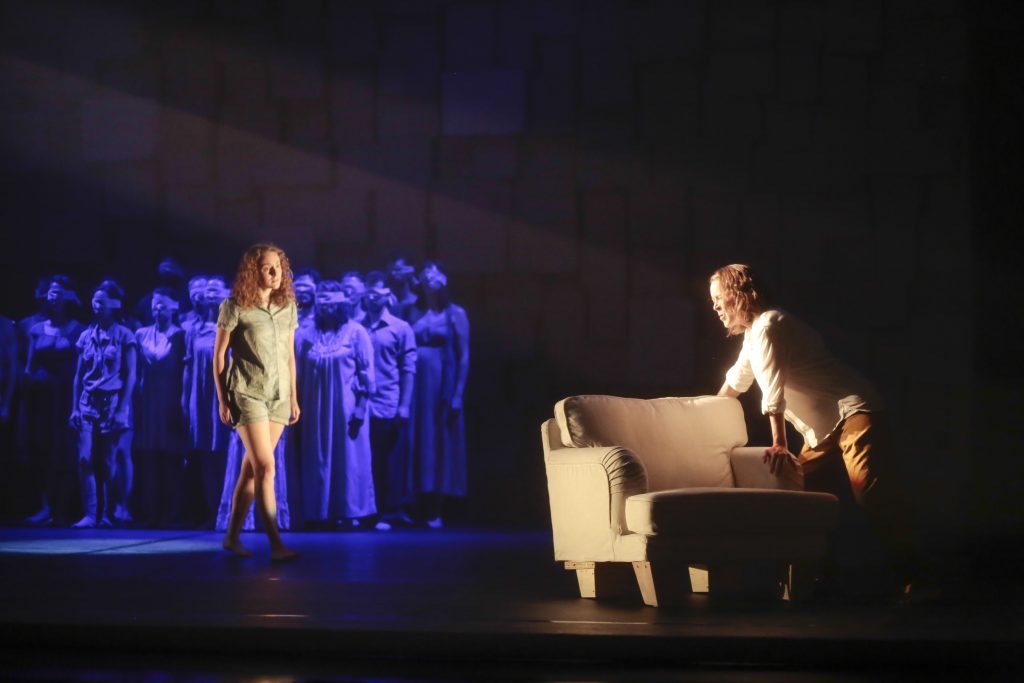 Indeed, the impact of Isasa’s imprisonment on her architectural designs is made painstakingly apparent on stage. As the Adult Patricia shows the Young Patricia a sketch for a library, the projected image of the sketch is superimposed upon a picture of the station in which she was held. Young Patricia criticizes her future self, stating, “Looks like a jail. Where’s the door?”

The most powerful moments of the opera are the conversations between the Young and Adult Patricia, played by sopranos Rebecca Woodmass and Norderval. Woodmass was particularly luminous in her role as the young, idealistic Isasa, and was generally well-matched to Norderval. Though she sometimes overpowered the composer-performer, it was fitting within the context of the narrative; Patricia’s memories proved to be a powerful force in rekindling her hope and desire to rebuild both her life and the city she loves.

Issues of balance also affected the trio of Ramos (Dion Mazerolle, baritone), Brusa (Daniel Pincus, tenor), and Facino (Vincent Ranallo, baritone), who were sometimes covered up by the density of the scoring. Their scene, a courtroom tango with full chorus (Ensemble Kô), was partially submerged by the bandoneón, an Argentine accordion traditionally associated with the dance.

Yet these small considerations aside, the production wanted for nothing. Each technical element—whether lighting, video, tape, or 3D animation—was thoughtfully integrated so that even the noise from retracting screens added to the realization of the work. Nordeval’s jazz- and tango-inflected score, handily guided by conductor Cristian Gort, accomplishes a lot with few resources.

“One of the most horrible things about torture is not so much the physical pain as the mental pain,” states Norderval in an interview with La Scena Musicale. “The fact that Patricia moved beyond that by keeping her sanity and her humanity shows real exemplary strength.” Indeed, the applause at the end of the night was as much for the performers and artistic direction as Isasa herself, who honoured the audience with her presence.

Timely, not timeless, The Trials of Patricia Isasa is a smart production, both in the manner it raises issues of personal and state responsibility for crimes against humanity and for the fitting way it recognizes the courage of a remarkable woman.