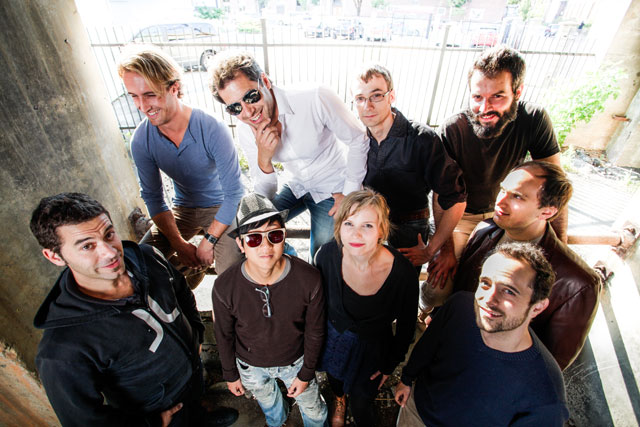 Known for pushing the boundaries in their music, Montréal-based classical string band collectif9 is forging into uncharted territory with the release of their debut album (see review here), featuring the world premiere recording of Volksmobiles by Canadian composer Geof Holbrook.

Formed in 2011 by Thibault Bertin-Maghit, collectif9 is a group of nine classically trained string players who aren’t shy about shaking things up. The members, who met at McGill University and the Université de Montréal, are violinists Yubin Kim, Frédéric Moisan, Grégor Monlun, and Roland Arnassalon; violists Scott Chancey and Xavier Lepage-Brault; cellists Andrea Stewart and Jérémie Cloutier; and bassist Bertin-Maghit.

Though collectif9 performs within the classical idiom, their bold performance style is heavily influenced by popular music, combining a rock-inspired rhythmic vitality with audio-visual elements such as lights and amplification. These interactive innovations have literally opened doors for the group.

“There are not many auditoriums in Québec with Maison Symphonique or Salle Bourgie’s nice acoustics, and because we play with amplification, we can play in most places,” says Bertin-Maghit. Playing in concert halls and clubs, churches and outdoors, collectif9 has gathered a following quite unlike other chamber ensembles.

With an unusual chamber formation of a double string quartet with added double bass, Bertin-Maghit arranges most of collectif9’s repertoire. Playing an eclectic mix that includes Beethoven, Brahms, Shostakovich, and Piazzolla, each piece is customized for the group. Sound engineer Rufat Aliev, who works behind the scenes at every live performance, brings each member’s individual voice to the forefront, allowing them to act as both soloists and collaborators.

“In chamber music roles change constantly. Since there are nine of us, there are way more possibilities,” explains Bertin-Maghit. “We are inspired by groups where all members are equally involved in the performance. In music, that’s not always the case; as soon as you have a bigger group, the energy and the way people are communicating with each other is different.”

The collaborative spirit of the group shines through in their stage performance, delivering their bite-sized – yet incredibly intricate – pieces with both dramatic flair and pinpoint accuracy. “It’s musically satisfying for everyone, and everyone takes pride in whatever role they have in a piece,” notes Stewart. Adds Bertin-Maghit, “Our strength is that the group really reflects each individual.”

Most of the music in collectif9’s rotation is inspired by very relatable folk styles that feature a strong rhythmic profile. Each piece on their debut album explores a different side of folk. The first, an arrangement of Brahms’s Rondo alla zingarese, from his Piano Quartet op. 25, is one of the group’s most popular pieces. It is followed by the atonal Sonata allegretto, an arrangement of Alfred Schnittke’s Violin Sonata no. 1. Also included on the album is Bartók’s Divertimento for Strings and André Gagnon’s Petit concerto, written in honour of Québec fiddler Jean Carignan.

The album takes its name from a three-movement work by Canadian composer Geof Holbrook, which was commissioned by collectif9. Volksmobiles was written specifically for nine equal string parts with amplification. Each movement features minimalist falling thematic cells with strong rhythmic elements based on extended techniques. In particular, the third movement incorporates a topography of slaps and knocks on the bodies of each instrument.

“Geof both writes music and performs music in classical contexts as well as pop, so he was in between genres that fit with our approach. The volks part of the name refers to folk. Most of the repertoire we play is folk-inspired so this was his point of departure for the composition of the piece. The mobile part is represented by the cascading motif throughout the parts,” explains Bertin-Maghit.

Throughout the recording process, the group developed a personal sound to maintain fidelity in their live performances. “We envision ourselves as a live music group,” says Stewart. “We wanted to keep the raw quality that you can get in a live performance, but we’re also perfectionists and we want to do our very best on this recording.” Adds Bertin-Maghit, “You hear the instruments very closely. You hear the details.”

“At first, it wasn’t our goal to make a CD,” states Bertin-Maghit. “First we shot videos, then we played concerts. Eventually we said, ‘Hey, we need a CD.’”

Collectif9 launches Volksmobiles on February 19 at Montréal’s Théâtre Outremont before embarking on a 30-concert tour, gigging in the manner of a rock group across New Brunswick, Québec, and Ontario. On March 10, they will perform for the first time in Toronto with Music Toronto. This tour comes on the heels of collectif9’s well-received first international tour in China this past December.

Even with the logistical challenges that come with extensive touring, the group is keeping a small management team and delegating many tasks among the musicians. “We have a mini-bus for the ten of us that I had to get a special license to drive,” says Stewart with a laugh.

Asked about next steps, Stewart laughs again, “We have too many plans. We’re good at thinking big.” For collectif9, only one thing is for certain: the search for new sounds and innovative ways to connect with their audience.

“It’s important to not take it for granted that something is going to work,” explains Bertin-Maghit. “There is always a bit of experimenting. You’re always on the edge. You’re not repeating the same thing over and over, otherwise you’re going to bore the audience – or yourself.”

“The future of chamber music is vast and full of variety,” states Stewart. “There are new things all the time that are not replacing what came before, they just add to the richness and the possibility. I think what we’re doing is a very important part of that. It’s good to have change.”