Set in the heart of a hilly landscape, Saint-Camille is a dynamic village that thrives on both culture and agriculture. It now has two performance spaces: the P’tit Bonheur and the Centre Le Camillois, the latter of which hosts the Concerts de la Chapelle. We met the managing director of Destination Saint-Camille, a cooperative founded in 2015 that has taken over the management of the old village church, which has been transformed into a multipurpose centre.

Originally from Asbestos (now Val-des-Sources), very close to Saint-Camille, Serge Langlois has known the village since his childhood. “The centre of life for me in Saint-Camille was Le P’tit Bonheur,” he says. “It was the performance space, it was Friday pizza. In the heart of the village, it was the central point for just about everyone.” A tradition that has lasted for more than 30 years.

Langlois also remembers a residential project in the early 2000s called Les fermettes du rang 13. The result of a joint effort by Le P’tit Bonheur de Saint-Camille and one of its founders, Sylvain Laroche, as well as the municipality and the Village Socioeconomic Development Corporation, this initiative sought to attract new families to the community. And with success! In just a few years, Statistics Canada indicates the village population increased by 20%, from 440 inhabitants in 2001 to 511 in 2011, then to 529 in 2016.

The survival of the village school was ensured by the arrival of some 25 new families. However, to accommodate all the children, this primary school had to be renovated and the community hall within it moved. The village church (which, until recently, had maintained its Sunday religious services) was bought by the municipality. This place of worship was well suited to community or recreational activities, but in a village of 500 people, these were not enough to support a program. “Hence the idea of ​​transforming the church into a multifunctional convention centre,” explains Langlois. “This is where Destination Saint-Camille was born, a cooperative whose mandate is to use the church in several ways: through rental, municipal campaigns, the production of events, and by making it available to Le P’tit Bonheur. The Concerts de la Chapelle, which took place at the Saint-Antoine sanctuary, on the same street corner in Saint-Camille, have now moved to the Centre Le Camillois.” 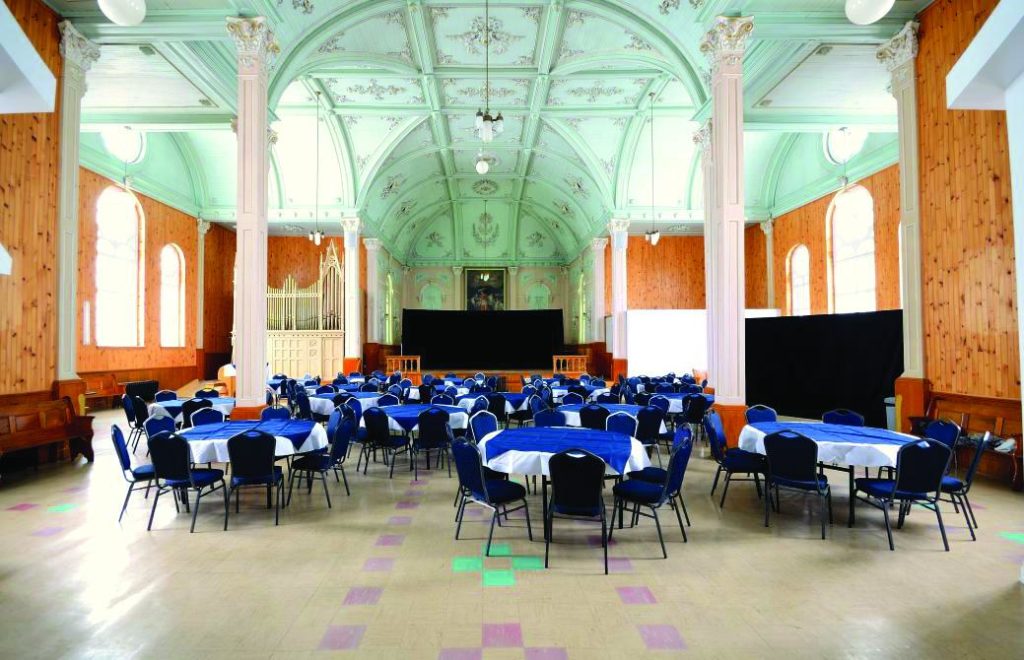 Le Camillois was designed to allow, among other things, the programming of concerts. Artists have a space in the old sacristy, now the municipal library. In addition, the substantial stage area allows the Concerts de la Chapelle to store the instruments they are lucky enough to have, including a positif organ lent by Ateliers Bellavance as well as a harpsichord and grand piano on loan from CANIMEX. Added to this is Les Concerts de la Chapelle’s own harpsichord, an instrument acquired from Ateliers Bellavance. “The room has a capacity of 250 seats,” Harel says. “The seats are removable, allowing the space to be configured to suit the performance, whether it is a recital or an opera that requires significant space for the orchestra. The space also allowed for the installation of cameras and the necessary arsenal for the recording team that we use regularly for the webcast without disturbing viewers.”

At the concert on May 2, the technical direction was provided by Enzo Marceau, who, with his wife, chose to settle in Saint-Camille and pursue his career there in show management. “We are very lucky to have Pénélope on our team,” Harel says. “She is a graphic designer by training and she is the one who produces all the visuals necessary for webcasts. This gives us an added cachet as often the webcast teams are focused on the technical aspect. We are also fortunate to have with us Max-Pol Proulx, a set lighting designer who has worked in the cinema business in Montreal.”

After several years in the corporate-event industry, Marceau, now engaged full-time at P’tit Bonheur, “felt the call of the region.” It is this same interest in the land that Langlois tries to draw from with Destination Saint-Camille: “Through our programming and our range of services, we manage to reach communities in many places and bring them together in the same place to address themes such as culture, health or regional issues specific to villages.” Of course, nothing can replace the experience of being in the very heart of Saint-Camille, but Langlois and his partners nonetheless find new technology and close collaboration with Le P’tit Bonheur a means of building bridges with isolated communities. “In addition to Enzo for the webcast, we surrounded ourselves with others who work in audio as well as video capture. We are also able to organize ‘téléprésence’ events with the SCENIC station, developed by the Société des arts technologiques de Montréal. The state-of-the-art equipment at Le P’tit Bonheur allows live connection to 21 performance venues in Quebec. Webcasting, in all its forms, has become an important enterprise for us. Even before the pandemic, it was part of our DNA.”