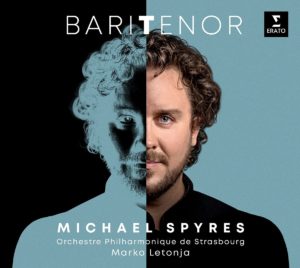 Tenor Michael Spyres is a name known to all opera buffs, his reputation hinging on a repertoire of light operatic fare. Critics rave about his performances of Italian arias by Donizetti and Bellini, but native French speakers give him high marks for his impeccable diction of lyrics in their own tongue. That said, the star vocalist has another ace in his deck. In his latest effort, entitled Baritenor and issued on the Erato label, he sticks to his usual range while dropping it a few steps into baritone territory, something rarely done and not to be attempted by just any singer. In fact, some may well view this undertaking with a jaundiced eye and question its motives.

Though Spyres’s forays in that lower register sound full and well-rounded, there is something unnaturally deep and sombre to the 43-year-old vocalist’s dalliances with it. But when he takes on Donizetti’s famous cabaletta “Pour mon âme quel destin” and other celebrated tenor arias, it’s as if his vocal range had no limits at all. Hence the question: why should this voice of the first order take on another range than the one it excels in all regards? No matter what one cares to think about it, the album is still worth a listen. Inasmuch as Spyres tackles with great aplomb the songs of Verdi, Mozart, Wagner and Rossini, he still offers a real bouquet of musical sounds, regardless of his vocal choices.