Although professional musicians and the music industry have followed workplace health and safety measures, people attending concerts and other activities need to follow them as well. Federal and provincial officials have spoken about this matter, authorizing a maximum of 50 people for indoor and outdoor gatherings. The Conseil québécois de la musique communicated this information in a press release. Here are some key points to remember.

During a June 15 press briefing, Quebec Public Health Director Dr. Horacio Arruda laid out the behaviours and precautions to take as COVID-19-related lockdown restrictions were gradually easing. He said that classrooms, performance halls, and cinemas were critical venues that needed to abide by lockdown-easing rules. These places included concert halls that bring in many people, such as Salle Wilfrid-Pelletier (3,000 seats), Maison symphonique (2,100 seats), and Salle Raoul-Jobin at Quebec City’s Palais Montcalm (approximately 1,000 seats). Dr. Arruda stated that a 1.5-metre distance must be observed, which is an exception to the two-metre distance rule that remains in effect in other public gatherings and places such as restaurants. “The 1.5-metre distance rule must be enforced in areas where people are seated and not talking to each other,” said Dr. Arruda. He has garnered public appreciation since the crisis began.

As of June 22, gatherings that involved people sitting without moving, talking, screaming, or shouting were granted an exemption from the two-metre distance rule. However, two-metre physical distancing rules would be re-enforced whenever concertgoers were standing outside concert halls, waiting in line, wandering in the corridors, or heading toward the exit. 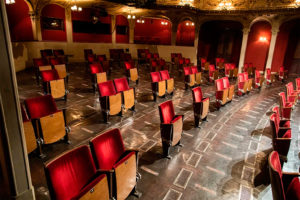 Given that silence is the golden rule during classical music concerts, it will be observed more closely. This explains why bars cannot reopen. “Droplets are produced when people are talking,” said Dr. Richard Massé, strategic medical advisor to the Direction générale de la santé publique at the Ministère de la Santé et des Services Sociaux (MSSS), the province’s ministry of health and social services. “‘Zero risk’ does not exist. The risks must be weighed – and people need to have a life.”

The current recommended distance for children 16 years of age and younger outside concert circles is one metre. Contrary to what most scientists said when the epidemic began, younger children are at lesser risk of contagion than the rest of the population, especially in schools and at summer day camps. However, when younger children are around adults, including teachers, they must continue to obey the two-metre distance rule. It is hoped that these new measures would spell the return to normalcy come the fall semester.

Mixed Reaction from the Scientific Community

Gradually reopening performance venues is part of a long lockdown-easing process that might take months. According to Dr. Caroline Quach-Thanh, pediatric microbiologist and infectologist at CHU Sainte-Justine, the proliferation of rules is confusing for the public. “Either ask people to stay one metre or two metres apart from each other. It becomes difficult to obey the rules when some groups are one metre, two metres, or 1.5 metres apart.”

At a press conference, public health officials were assessing the possibility of increasing maximum capacity to 250 audience members by mid-July.

For an update on the latest government announcements, including those by the Ministère de la Culture et des Communications, visit www.mcc.gouv.qc.ca.