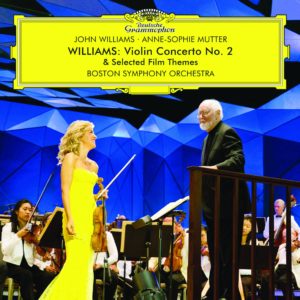 Having worked together on two occasions (for recordings issued in 2019 and 2020 on Deutsche Grammophon), John Williams and Anne-Sophie Mutter are no strangers to each other. And as all good things come in threes, here they are back again on the same label and sharing top billing for Williams’s violin concerto.

The work opens on a rather brooding harp solo. Mutter’s violin appears almost timidly through a sombre mass of strings, a prelude to the soloist’s virtuosic flights of fancy that never become overindulgent. Even if there are a few lighter and lyrical passages tinged with melancholia, there is a feeling of angst that runs through the work. True to himself, the composer relies heavily on the brass to create a wide range of dramatic effects. We are very much in that musical universe of scores written for those famed intergalactic blockbusters of his, yet there is more of a modern tinge in his writing here. Williams does not as much dip into the trough of Hollywood’s epic storytelling as deconstruct his own language and thus show willingness toward ongoing change. As for the violin part, it is in some ways reminiscent of the halcyon styles of modernity, most notably Schoenberg and his Violin Concerto of 1936. Yet, this begs the question: Is Williams’s music really modern? If nothing else, we can surely agree it is not new. Included in this package are three of the composer’s celebrated themes, reorchestrated for the occasion, from Star Wars and Raiders of the Lost Ark. If you’re at all nostalgic for Han Solo or Indiana Jones, you’ll be happy to hear them.